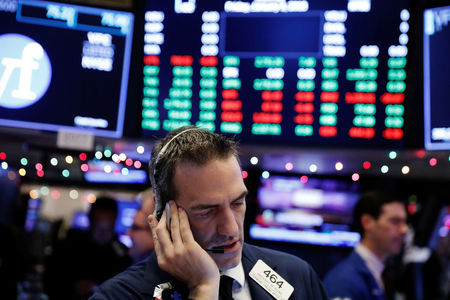 Investing.com –The Dow fell sharply Monday, paced by a rout in value stocks on fears the recent spike in Covid-19 infections could weigh on the economic recovery amid fading hopes for U.S. stimulus before the election.

Coronavirus infections in the U.S. hit a record, adding more than 85,000 through Saturday, Bloomberg reported, after surpassing the previous record on Friday of 83,757 new cases.

Little sign of progress on stimulus talks, meanwhile, dimmed expectations the economy would receive a fiscal boost before the U.S. election on Nov. 3.

House Speaker Nancy Pelosi is reportedly waiting for another counteroffer from Treasury Secretary Steven Mnuchin, but as there remains sizable disagreement over key issues “reaching a deal ahead of the November election appears improbable, if not entirely impossible,” Stifel said in a note. Pelosi is reportedly set for further talks with Mnuchin at 2:00 PM ET (1800 GMT).

Energy and industrials led the move lower in value stocks, with the latter down on heavy selling in airline stocks as the spike in cases raised concerns that restrictions to curb infections could prompt airlines to cut capacity further.

Financials gave up some of their gains from last week as banking stocks were abandoned after Treasury yields reversed sharply, with United States 10-Year down 5%.

Tech, which had led the rally since the mid-March bottom, added to the broader market selloff, with the Fab 5 nursing losses.

Amazon.com (NASDAQ:AMZN) and Apple (NASDAQ:AAPL) were down about 1%, while Facebook (NASDAQ:FB), Google-parent Alphabet (NASDAQ:GOOGL) and Microsoft (NASDAQ:MSFT) fell more than 3%.

Positive news on the vaccine front from AstraZeneca, meanwhile, did little to keep losses in check.

AstraZeneca PLC ADR (NYSE:AZN) rose more than 1% after the company said its coronavirus vaccine candidate had triggered an immune response in both younger and older adults.

On the economic front, the rapid growth in housing activity slowed in September, with some warning of further slowing to come. New home sales fell to 959,000 units last month from 994,000 a month earlier, missing forecasts of 1 million.

"The single-family housing market is still registering strong demand … however, record-low supply is pushing up prices even faster, which is hindering potential buyers from affording new homes,” said Grant Thornton Economist Yelena Maleyev. "This will be exacerbated by the lack of additional COVID-19 support from Congress; the scars of this recession will run deep," Maleyev added.