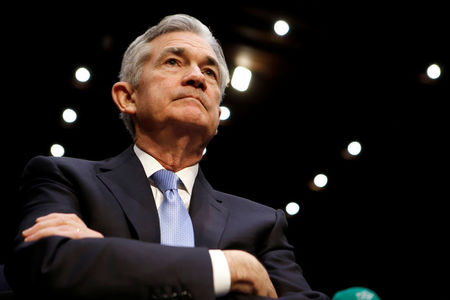 Investing.com – The Dow racked up gains on Wednesday, led by a surge in energy and financials as optimism that the Federal Reserve will reiterate its plans to keep monetary loose offset data pointing to a slowdown in consumer spending.

EOG Resources (NYSE:EOG), TechnipFMC (NYSE:FTI) and Diamondback Energy (NASDAQ:FANG) were among the biggest gainers, with the latter rising more than 7%.

Financials also climbed higher even as Treasury yields stuttered on expectations the Fed will keep rates unchanged and back a lower-for-longer interest rate environment.

Citigroup (NYSE:C) and Goldman Sachs (NYSE:GS) were up more than 2%, while JPMorgan Chase & Co (NYSE:JPM) added more than 1%.

Tech, meanwhile, took a breather following its strong start to the week, with Apple (NASDAQ:AAPL) falling nearly 2% after unveiling new iPads and Apple watches and a new bundled subscription service as well as a personalized workout service.

Signs of softer retail sales raised concerns about the economic recovery at a time when the prospect of further fiscal stimulus appears murky at best.

U.S. retail sales rose less than forecast in August, up 0.6% after a downwardly revised 0.9% increase the prior month, The Commerce Department said. The increase for August had been expected at 1%.

“August retail sales data, along with downward revisions to July data, show a clear slowdown in consumer demand over the summer months,” Jefferies (NYSE:JEF) said. “The combination of fading fiscal support and lack of pentup demand clearly contributed to the summer slowdown.”

In other news, Snowflake (NYSE:SNOW) made its debut at $245, more than double its initial public offering at $120 a share.