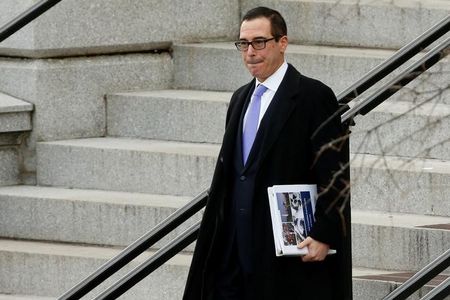 Investing.com – The Dow made a positive start to the month on Thursday, as tech continued to advance and labor market data remained steady, though uncertainty over for further federal stimulus kept a lid on gains.

Ahead of another round of talks with U.S. Treasury Secretary Steven Mnuchin to get deal on stimulus over the line, House Speaker Nancy Pelosi reportedly told Democrats she doubts whether an agreement can be reached, Bloomberg reported, citing sources. The White House has offered Pelosi a $1.6 trillion package that would include $400 a week in additional unemployment insurance, less than the $600 the Democrats requested, the sources said. Pelosi and Mnuchin are expected to continue talks on Thursday.

The stimulus bill would also include much-needed aid for the airline industry to stem a wave of layoffs in the wake of weaker travel demand. American Airlines (NASDAQ:AAL) and United Airlines (NASDAQ:UAL), up more than 1% and 2% respectively, moved ahead with plans to cut staff but pledged to reverse the cuts if Congress agreed to roll out aid.

In the absence of stimulus, however, the recovery in the labor market appears to have continued, though at a slower pace.

The Labor Department reported that 837,000 people filed for unemployment insurance for the week ended September 26, less than the 850,000 filers economists had feared, and the lowest claims count since they were 282,000 during the week of March 14.

Energy proved an exception after oil prices plunged more than 5% as crude demand concerns intensify at a time when coronavirus infections continue to mount.

On the earnings front,  PepsiCo (NASDAQ:PEP) rose 1% after its full-year guidance and quarterly earnings beat estimates, led by growth in its snack business. The company guided full-year earnings of $5.50 per share, topping consensus estimates of $5.36.

Bed Bath & Beyond (NASDAQ:BBBY) surged 32% after reporting a surprise quarterly profit of 50 cents and its first comparable-store sales growth since the fourth quarter of fiscal 2016. Comp sales grew 6%, compared with estimates for a 2.1% decline.