(Reuters) - Russian Daniil Medvedev survived cramps and tantrum where he cracked a racquet to clinch his first Masters 1000 title on Sunday with a 7-6(3) 6-4 win over David Goffin in the final of the Cincinnati Masters.

Medvedev saved two breaks points while serving for the match at 5-4 in the second set before winning the next four, three of them with aces to close out his dogged Belgian opponent.

It was the second title of the year for Medvedev, who had lost on the past two Sundays, to Nick Kyrgios in Washington and Rafa Nadal in Montreal.

"It would be not a good feeling if I lost three finals in a row so it's just a relief and I'm so happy," he said in a courtside interview with ESPN after playing his 16th match in 20 days.

"I started feeling cramps at 5-3 (in the second set), first time in three weeks I started cramping, probably because of the nerves and it's been 24 days in a row I played tennis.

"I made four serves that he didn't return and three of them were aces. It's just unbelievable."

The pressure perhaps showed in the final game when Medvedev hurled his racquet to the ground after losing a point, but the temper tantrum was short lived and he regrouped quickly to clinch his fifth title in two years.

Earlier, Goffin did well to force a first set tiebreak by holding serve, including winning a 29-rally point.

But the Belgian, without a victory since 2017, lost the tiebreak on a double-fault.

“He's super solid. He doesn't miss. It's like playing against a wall. That's why everybody is struggling, because he's so consistent, now with more confidence.”

Medvedev, who beat world number one Novak Djokovic in the semi-finals, plans a short rest before the U.S. Open starts in eight days.

"I need some days off," he said. "I've been playing tennis for so long in a row. I just need to stay in the bed for a few days watching the TV 24 hours a day.

"Hopefully I can regroup and get to the U.S. Open fresh." 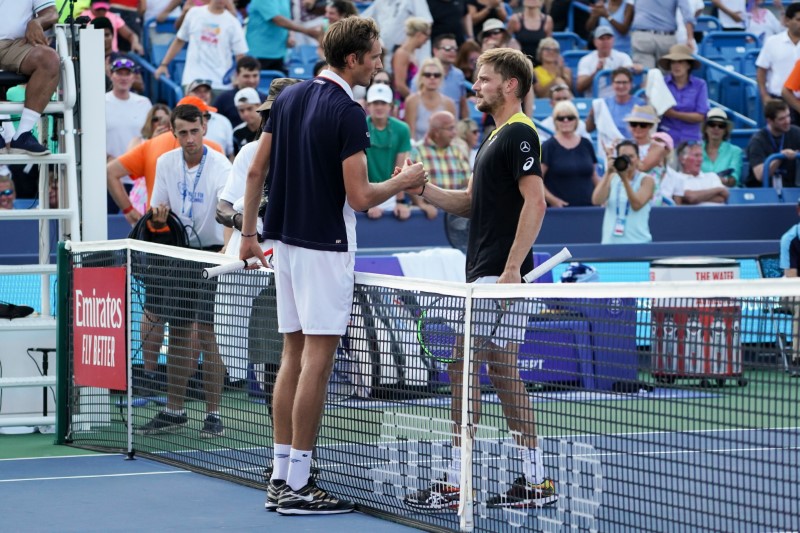