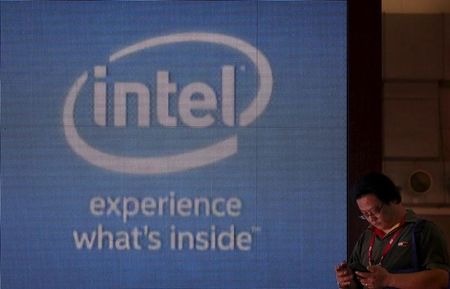 Investing.com Wall Street drifted sideways at the start of the final session of the week, despite a business survey showing the U.S. economy continuing to perform above expectations on aggregate.

The U.S. composite purchasing managers index published by consulting firm IHS Markit rose to 53.1 in January, ahead of forecasts for a dip to 52.5, thanks to robust activity in the services sector. The manufacturing PMI did, however, dip to 51.7 from 52.4, suggesting only moderate growth.

Chipmaker Intel (NASDAQ:INTC) was the standout performer, rising 7.2% to its highest since the very peak of the dot-com boom back in 2000 after reporting better-than-expected earnings after the bell on Thursday. The company continues to ride the wave of demand for high-powered chips from data centers on which Cloud servers run. It also enjoyed a kicker from demand for new PCs ahead of Microsoft’s deadline for ending support for Windows 7.

Rival Broadcom (NASDAQ:AVGO) also extended gains, rising another 2.5%, in the wake of its announcement of a major deal to supply Apple (NASDAQ:AAPL). Skyworks (NASDAQ:SWKS), whose products will be displaced by the deal, fell 4.2%

NextEra Energy (NYSE:NEE), the parent company of Florida Power & Light, meanwhile overcame an initial dip premarket to rise 0.7%, as it reiterated its ultra-bullish guidance for the next three years.

American Express (NYSE:AXP) rose 2.9% after reporting a strong holiday quarter, with U.S. spending on its cards up by 6% year-on-year.

Elsewhere, the dollar index, which measures the greenback against a basket of other currencies, hit a new high for the year of 97.710 before retreating to 97.665, up 0.2% on the day. U.S. crude oil prices continued to fall on fears of oversupply, as fears strengthened that the coronavirus outbreak will hit Chinese demand. They were down 2.2% at $54.40 a barrel, their lowest since October