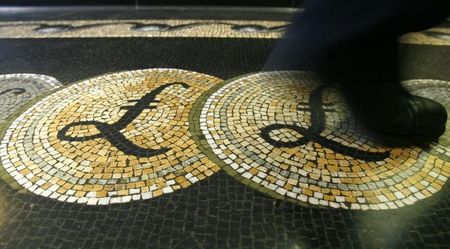 Investing.com - The pound pushed higher on Tuesday against most major currencies following the release of Bank of England data showing that consumer lending grew more than expected in December.

Immediately prior to the Bank of England data release at 09:30 GMT, cable was down to 1.4028. Earlier on Tuesday the pound sank to its week low below 1.40.

Net lending to individuals increased by £5.2 billion in December, matching November’s upwardly revised figure. Analysts had predicted an increase of £4.8 billion. November’s figure was revised upward to £5.2 billion, from £4.9 billion.

The amount of mortgage approvals in December was the lowest since January 2015. The Bank of England increased interest rates to 0.5% in November 2017.

Mortgage lending increased by 3.68 billion in December, compared to 3.74 billion the month before. The forecast figure had been 3.45 billion.

M4 Money Supply decreased by 0.6% in December, lower than the forecast increase of 0.2%. The figure for November was revised upward from 0.1% to 0.2%.

The pound rallied last week, reaching post-Brexit referendum highs of above 1.43. Sterling came under pressure on Monday following a report from the House of Lords that stated the legislation to exit the EU had ‘fundamental flaws’.

The U.S. dollar index, which measures the greenback’s strength against a basket of six major currencies, was down 0.26% to 88.94.

Investors will be watching President Donald Trump's State of the Union speech in the early hours of Wednesday morning, and Federal Reserve policy meeting on Wednesday afternoon.

Investors will be looking to the GfK consumer confidence on Wednesday and manufacturing PMI from the UK on Thursday. UK Construction PMI will be released on Friday.