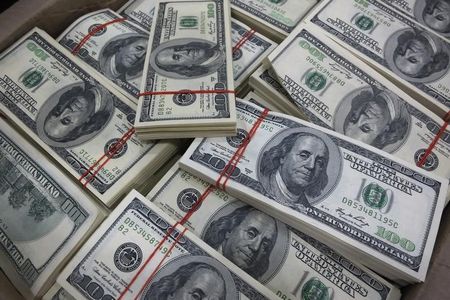 Investing.com - The U.S. dollar has slipped slightly in European trade Wednesday, with equity markets opening higher, but this safe haven remains in fashion as oil markets continue to show stress.

These indices have been helped by further signs of a normalization of economic activity, with the Dutch government announcing plans to ease its coronavirus containment measures, allowing primary school children to go back to school part time from May 11.

That said, the crude oil market remains in a state of freefall, with the front month WTI contract now June but selling continuing as investors and traders desperately seek to avoid delivery given the shortage of storage space for the current glut of oil. The Brent contract has also become embroiled in the turmoil.

“The bears are certainly getting the upper hand,” Chris Weston, head of research at Pepperstone, told CNBC, adding it was hard to bet against the dollar in such a climate.

The collapse in oil and expectations of an interest rate cut later this week pushed the Russian ruble to a three-week low of 77.53 against the dollar earlier.

A preliminary estimate of Australian retail sales showed an 8.2% rise in March from February, the strongest seasonally adjusted rise ever published, supported by strong sales across supermarkets, liquor retailing and other specialized food.

"I would treat the number with caution, because, like elsewhere there has been so much panic buying of toilet paper and other things," said National Australia Bank FX strategist Rodrigo Catril, who expects a plunge in April figures.

The Turkish lira is likely to be in focus later Wednesday, as the country’s central bank meets to decide on interest rate policy. Another cut is widely expected, which would be the eighth in less than a year, with the majority of economists expecting a reduction of 50 basis points to 9.25%.

This would indicate that the central bank is prepared to overlook the lira’s steep decline as it looks to spur credit to mitigate the economic fallout from the coronavirus outbreak.