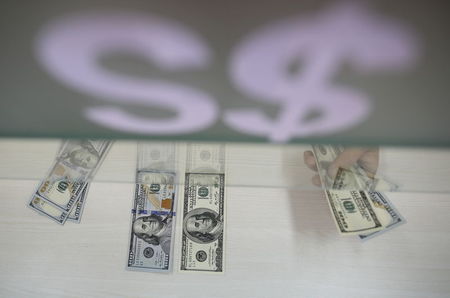 Investing.com - The dollar remained moderately lower against against the other major currencies on Monday, as renewed weakness in equities markets overnight weighed, although expectations for a September rate hike by the Federal Reserve limited losses.

The U.S. dollar index, which measures the greenback’s strength against a trade-weighted basket of six major currencies, was down 0.17% at 95.98, but remained well above the eight-month trough of 92.52 hit last Monday.

The dollar found support after Fed Vice Chairman Stanley Fischer said Friday it was still too early to decide whether to raise interest rates from near zero at the bank’s September meeting.

The single currency found support after data on Monday showed that euro zone consumer price inflation rose by 0.2% last month, above expectations for a gain of 0.1% and following a 0.2% increase in July.

The rate has now been below 1% for 21 straight months, well under the European Central Bank's target of near but just under 2%.

Core CPI, which excludes food, energy, alcohol, and tobacco costs increased by 1.0% in August, matching forecasts and unchanged from July.

Shanghai Composite turned lower on Monday after a 10% rally in the previous two sessions, amid renewed concerns over the health of the world’s second-largest economy, while shares in Hong Kong were also weaker.

Demand for the yen was boosted as heightened risk aversion underpinned demand for the low-yielding currencies to fund investment in risk assets.

Investors were looking ahead to Friday’s U.S. jobs report for August, which could help to provide clarity on the likelihood of a near-term interest rate hike.

Markets were also awaiting Chinese data on Tuesday which was expected to show that the rate of economic growth is continuing to slow.