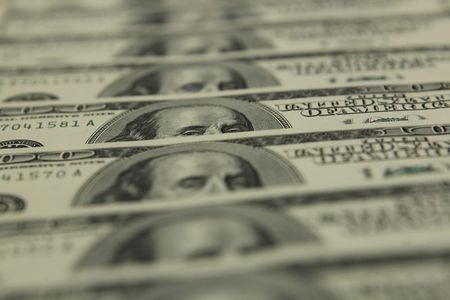 Investing.com - The dollar hovered close to eight-month highs against the other major currencies on Wednesday, as growing expectations for a December rate hike by the Federal Reserve overshadowed the previous day's downbeat U.S. data.

The dollar had weakened after the Institute of Supply Management reported on Tuesday that its manufacturing PMI fell to a six-year low of 48.6 in November from 50.1 the previous month, confounding expectations for a rise to 50.5.

But speculation that the Fed will raise interest rates at its December meeting continued to lend broad support to the greenback.

Investors were eyeing a string of U.S. economic reports this week, including Friday's nonfarm payrolls report for further indications on the strength of the economy, as the Fed has said that any decision on interest rates will depend on data.

Eurostat said on Wednesday that the euro zone's consumer price inflation increased by 0.1% last month, missing expectations for a gain of 0.2% and following a 0.1% increase in October.

The rate has now been below 1% for 26 straight months, well under the European Central Bank's target of near but just under 2%.

Sentiment on the euro also remained vulnerable amid signals by the ECB over the past weeks that it is ready to implement additional easing measures in order to boost inflation in the euro zone and support growth.

Sterling weakened after market research firm Markit and the Chartered Institute of Purchasing & Supply said that their U.K. construction PMI declined to seven-month low of 55.3 last month from a reading of 58.8 in October. Economists had expected the index to fall to 58.2 in November.

The U.S. dollar index, which measures the greenback’s strength against a trade-weighted basket of six major currencies, was up 0.26% at 100.13, close to Monday's eight-month peak of 100.35.