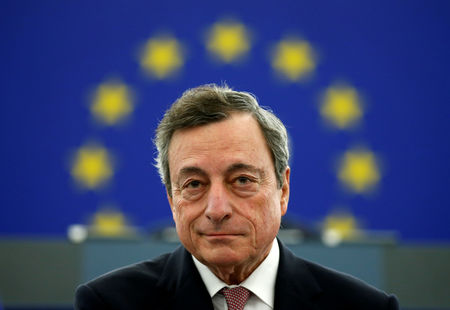 Investing.com -- Mario Draghi hosts his last press conference as head of the ECB, while Tesla (NASDAQ:TSLA) is set to open at its highest in months after a surprise return to profit in the third quarter. Tech indexes remain supported by stronger-than-expected earnings from Microsoft (NASDAQ:MSFT) - and it'll be Amazon's turn to report after the closing bell. Here's what you need to know in financial markets on Thursday, 24th October.

Mario Draghi presides over his last meeting at the European Central Bank before handing over to Christine Lagarde, who has run the International Monetary Fund for the last eight years. His press conference starts at 8:30 AM ET (1230 GMT).

No policy steps are expected after September’s multi-faceted easing program. Instead, the focus is likely to be on the split Draghi created within the bank’s governing council in forcing through a resumption of quantitative easing over the objections of the French, German and Dutch central banks.

The decision to cut the ECB’s deposit rate further into negative territory will also be under scrutiny. Sweden’s Riksbank said earlier Thursday that it expects to end its experiment with negative rates in December, by raising its repo rate back to 0% from -0.25%. That bucks a global trend of monetary easing which is still largely intact: Indonesia cut its key rate again earlier in the day.

2. Tesla's return to profit shines in a misfiring auto sector

Tesla (NASDAQ:TSLA) posted a surprise return to profit in the third quarter, and CEO Elon Musk said the group’s Model Y crossover SUV will be available sooner than the company had predicted. The shares rose 20% in after-hours trading on Wednesday and are poised to open at an eight-month high.

That was a sharp contrast with Ford Motor (NYSE:F), whose shares fell 2.6% after the bell in response to another cut to its forecasts. Analysts noted that the third-quarter results weren’t actually that bad though.

There was better news from Daimler (DE:DAIGn), the maker of Mercedes-Benz, where revenue rose 8%, while Sweden’s Volvo more than doubled its net profit and reported a 2-percentage point increase in its operating margin.

U.S. stock markets are set to open fractionally higher, as reaction to this quarter’s set of earnings continues to tend to the positive, despite high-profile misses on Wednesday from Caterpillar (NYSE:CAT) and Boeing (NYSE:BA).

Tech-heavy indexes are due for some support after heavyweight Microsoft (NASDAQ:MSFT) beat expectations for its fiscal first-quarter earnings after the closing bell on Wednesday. Earnings per share rose to $1.38, well ahead of the $1.24 forecast, as the company raised its guidance for cloud bookings in the current quarter.

The world’s manufacturing sector is still in a funk, according to ‘flash’ purchasing managers indexes from around the world. Japan’s PMI fell the most in three years, and for the fifth month in a row, while Australia’s hit an all-time low of just over 50.

The PMI for the U.S. is due out at 9:45 AM ET. Before that, at 8:30, there will be durable goods orders for September and initial jobless claims for last week, while the Kansas City Fed’s regional business survey is due at 11 AM ET. New home sales data are due at 10 AM ET.

Crude oil prices have held on to most of their gains overnight after a surprise drop in U.S. inventories sparked a vicious short squeeze on Wednesday that drove prices up over 2%.

The data snapped a five-week streak of stock builds that had fed fears of a fresh glut on global markets. Speculation is still swirling that the OPEC+ group of producers will announce further cuts to their output when they review their current deal in December. However, comments out of Russia this week suggest they will resist such a move, in the expectation that lower prices will stop the growth in U.S. shale output instead.