Top 5 Things to Know in the Market on Monday, 16th December

Top 5 Things to Know in the Market on Monday, 16th December 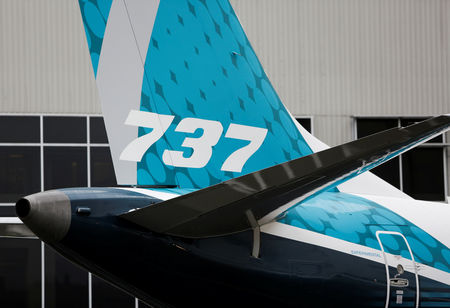 Investing.com -- Boeing (NYSE:BA) may halt production of the 737 MAX amid fears of further delays in its efforts to return the plane to service. There were signs of the economy bottoming out in China overnight, but data from Europe were less encouraging. DuPont (NYSE:DD) is folding its nutrition business into International Flavors and Fragrances in a $26 billion deal and China is cranking up the pressure on Germany not to ban Huawei. Here's what you need to know in financial markets on Monday, 16th December.

1. Boeing's board may decide to halt 737 MAX production

Boeing (NYSE:BA) may cut or even halt production of its 737 MAX in response to ongoing difficulties in getting the plane certified as safe to fly, according to various reports. The company’s board may take a decision as soon as Monday, having already convened to discuss the matter at the weekend.

The board meeting, first reported by The Wall Street Journal, comes only days after U.S. regulators warned Congress that Boeing (NYSE:BA) had been raising unrealistic expectations about when the aircraft would be cleared to fly, and that they felt Boeing was trying to pressure them into taking quicker action than they felt was prudent.

The 737 MAX grounding has already cost Boeing (NYSE:BA) $3.6 in one-off charges and a further $6.1 billion in provisions for compensating customers.

2. Bottoming out in China, gloom in Europe

Economic data out of China overnight strengthened impressions that the country’s economy is bottoming out. Industrial production growth accelerated to 6.2% in November, above the 5.0% expected and pulling further away from the 17-year low it hit in August.

Retail sales growth also picked up from 7.2% in October to 8.0%, while fixed asset investment growth stayed unchanged at 5.2%.

By contrast, flash purchasing manager index data out of Europe were weaker than expected, with gauges for manufacturing activity in Germany, France and the U.K. all falling. Services were slightly stronger than expected, but the 50.6 composite PMI for the euro zone suggests that its gross domestic product is still growing at its slowest pace in six years.

U.S. stocks are set to open higher after Friday’s phase-1 trade truce with China removed another tail-risk for stocks going into year-end, hot on the heels of the Federal Reserve’s announcement of extra liquidity injections to prevent the repo market malfunctioning as it did at the end of 2018.

Overnight, Asian stocks had stayed more or less flat, but Europe’s markets got off to a flying start, with the U.K. FTSE 100 index rising as much as 2% before paring gains.

With no major earnings due, the market will be free to focus on economic data, with the New York Empire State manufacturing index due at 8:30 AM ET and the IHS Markit PMI at 9:45 AM. The NAHB Housing Market Index is then due at 10 AM

DuPont (NYSE:DD) de Nemours said it will combine its nutrition science business – which accounts for just over a quarter of its revenue – with International Flavors & Fragrances (NYSE:IFF) in a deal that values the division at $26 billion.

The transaction is the latest act in the saga of dealmaking that started with the merger of Dow Chemical (NYSE:DOW) and DuPont (NYSE:DD), with a view to turning the two conglomerates into a string of more specialized and profitable sector-specific companies. The new IFF will be a big supplier of soy proteins, probiotics and other ingredients, including those with applications in the fast-growing space of plant-based meat alternatives.

DuPont (NYSE:DD) shareholders will receive shares equal to 55.4% of the combined company, while IFF’s shareholders get the other 44.6%. DuPont also will get a $7.3 billion cash payment.

Ireland-based Kerry Group (OTC:KRYAY), which had vied with IFF for the DuPont (NYSE:DD) unit, fell 3.5% in London in early trading Monday.

Having secured its flank against the U.S., China took more assertive line against Europe on trade issues.

Reports cited the Chinese ambassador to Berlin as saying that there would be “consequences” if Germany moved to exclude Huawei from the country’s 5G networks. That risk appears to be growing after lawmakers drafted a bill last week that aims to do just that. Chancellor Angela Merkel has so far steered clear of risking a confrontation with Germany’s largest trade partner over the issue, despite warnings by her top security officials.

The decision by Spain-based Telefonica (MC:TEF) to pick Huawei and Nokia (HE:NOKIA) together to build its 5G network in Germany appears to have galvanized resistance to the Chinese giant.

Elsewhere over the weekend, Chinese television pulled an English soccer game between Arsenal and Manchester City after Arsenal’s German-Turkish star Mesut Ozil criticised Chinese human rights violations in the largely Muslim province of Xinjiang. For Arsenal fans in China, the decision was a blessing in disguise, as the fallen giants of English soccer slumped to another dismal 0-3 defeat.