Germany has fiscal muscle to counter next crisis - Scholz

Germany has fiscal muscle to counter next crisis - Scholz

With its economy on the brink of recession and borrowing costs at record lows, Germany is facing pressure at home and abroad to ditch its pledge to target balanced budgets and instead boost investment by taking on new debt.

A government official told Reuters earlier this month that the finance ministry was toying with the idea of issuing debt in line with the more formal debt-brake rules to help finance a climate protection programme.

Speaking at a government "open day" news conference, Scholz acknowledged the debate about debt-financed spending but said a state should live within its means in economic good times, not least because this meant it would be better placed to act when things go wrong.

Germany's debt level is expected to fall to roughly 58% of economic output this year from 60.9% the previous year, putting it below the European Union's debt ceiling of 60% and giving it more flexibility on future spending.

"So if we have a debt level in Germany in relation to economic output that is below 60 percent, then this is the strength we have to counter a crisis with full force," Scholz said.

Scholz said the global financial crisis in 2008/2009 had cost Germany roughly 50 billion euros, adding: "And we have to be able to muster that (sum of money). And we can muster that. That's the good news."

The finance ministry declined to comment on a media report on Friday that said Berlin would be prepared to ditch its balanced budget rule and take on new debt to counter a possible recession.

The German economy contracted 0.1% quarter-on-quarter from April to June, pushing Europe's biggest economy close to a recession as sentiment surveys and industrial orders data suggest hardly any improvement in the third quarter.

Most economists define a recession as a period of at least two consecutive quarters of contraction.

Scholz said the Germany economy was suffering mainly from weaker foreign demand and business uncertainty linked to factors such as the escalating trade dispute between the United States and China.

"The biggest problem is uncertainty, including that caused by the Chinese-U.S. trade war," Scholz said.

Scholz has confirmed speculation over the weekend that he stood ready to run for the party leadership of his co-ruling Social Democrats (SPD), who have seen their support fall since joining Merkel's conservatives in a coalition government. 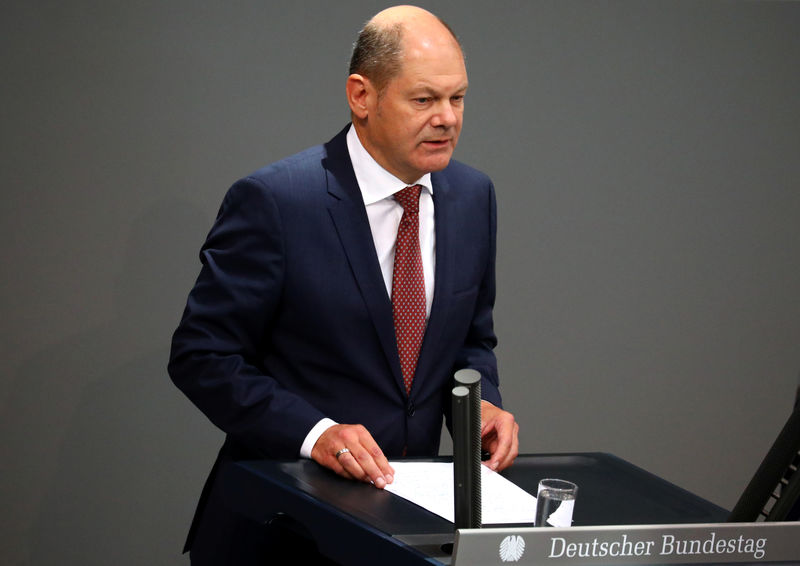