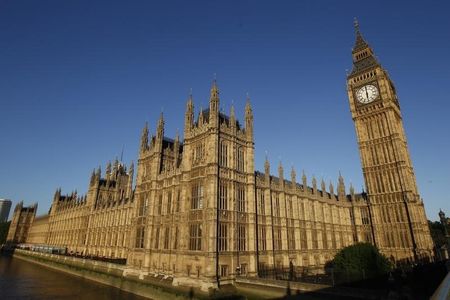 LONDON (Reuters) - British 30-year bond yields rose to their highest since March on Friday and the gap between five-year and 30-year borrowing costs widened to its most since January 2019, as markets reacted to Thursday's policy shift from the U.S. Federal Reserve.

Fed Chair Jerome Powell said the U.S. central bank would be more willing to allow inflation to rise above its 2% target after periods of undershooting, and would worry less about the inflation implications of very low unemployment.

"This may be okay for now, when inflation risks are low, but if price pressures come back with a vengeance there could be trouble ahead," said Michael Brown, a market analyst at currency brokers Caxton FX.

Thirty-year British government bond yields (GB30YT=RR) - which are sensitive to long-term inflation expectations - peaked at 0.969% on Friday, their highest since March 20. This yield was 3 basis points higher on the day and on course for its biggest monthly rise since October 2016, up 31 basis points.

Nonetheless despite record government borrowing due to COVID-19, gilt yields remain very low by historic standards - kept down by a record-low Bank Rate of 0.1%, 745 billion pounds of Bank of England asset purchases and a weak economic outlook.

Ten-year yields (GB10YT=RR) rose to their highest since June 5 at 0.372% on Friday, but shorter-dated yields were little changed as markets expect both the BoE and the Fed to keep official interest rates low in the short-term to deal with the economic hit from the coronavirus.

The yield spread between five-year and 30-year gilts

BoE Governor Andrew Bailey is due to speak at the same Fed conference as Powell at 1305 GMT.