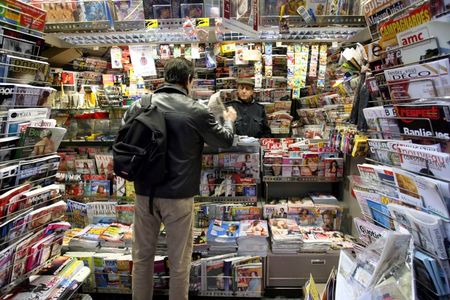 Investing.com -- Germany extends its lockdown restrictions through December 20th – but doesn’t tighten them much despite failing to bring down its infection curve. Consumer confidence in Europe’s two biggest economies falls. Bitcoin corrects sharply downward, and Ripple corrects even more sharply. Salesforce is reported to be close to buying Slack and Exxon Mobil is gloomy on oil. Here’s what you need to know in financial markets on Thursday, November 26th.

1. Germany extends restrictions - but doesn't tighten them much

Germany’s federal and regional governments extended current restrictions on business and social gatherings until December 20 and expanded restrictions on mask-wearing, but otherwise shied away from tightening restrictions as it tries to bring its second wave of the coronavirus under control.

Europe’s largest economy reported a record-high 32,000 new cases of Covid-19 on Wednesday, as well as over 300 deaths for the third straight day. Having implemented a less strict lockdown to deal with the second wave of the pandemic, it has so far failed to bring the virus under control. By contrast, France and the U.K. have started to relax their restrictions ahead, hoping to guarantee something closer to normal life by Christmas.

Consumer sentiment surveys in both France and Germany both fell by more than expected in November, data released on Thursday showed.

Doubts are growing about the reliability of the data provided by AstraZeneca (LON:AZN) and the University of Oxford over the effectiveness of their experimental drug to fight the coronavirus.

Moncef Slaoui, the head of the U.S. Operation Warp Speed team tasked with funding vaccine development, said on Wednesday that the subgroup which reported the highest degree of efficacy in the stage 2 trial data released last week had been restricted to people under 55, an age bracket that appears in any case to be more resistant to the disease, or at least its more severe manifestations.

The test data had shown that the drug had prevented the disease in 62% of people who received two full doses of the vaccine, but 90% in those who received only a half dose to start with. The half-dose experiment started as a mistake but was extended for the sake of consistency.

Global stocks stayed in mostly positive territory before drifting into range trading as the U.S. Thanksgiving Holiday loomed large over the day’s proceedings.

Weak consumer confidence data in France and Germany were marginally offset by stronger-than-expected credit growth figures from the European Central Bank, which is also due to release the accounts of its last policy meeting later.

There was a more violent correction in other markets, where Bitcoin gave up over 10% after an equally violent rally, while Ripple, another popular cryptocurrency, fell 22%.

Slack (NYSE:WORK) stock rose 36% on Wednesday to close near an all-time high on reports that it is in talks to be acquired by software giant Salesforce (NYSE:CRM).

Marc Benioff’s company could reach a deal for the office messaging software app within days, according to The Wall Street Journal, but it’s unclear how any deal would be structured. Like many software companies, its valuation is far in excess of what its current financials would usually justify.

For all its popularity, Slack’s shares have failed to capitalize on the trend away from email in offices, and now faces an increasingly acute strategic challenge from Microsoft’s Teams application.

The Wall Street Journal reported on Wednesday that Exxon Mobil (NYSE:XOM) had revised down its estimate of oil prices over the next six years by between 11% and 17%, indicating expectations of a prolonged impact on prices from the pandemic.

Short-term pressures may also be building up, given a surprisingly strong build in U.S. inventories last week, according to U.S. government data released on Wednesday.