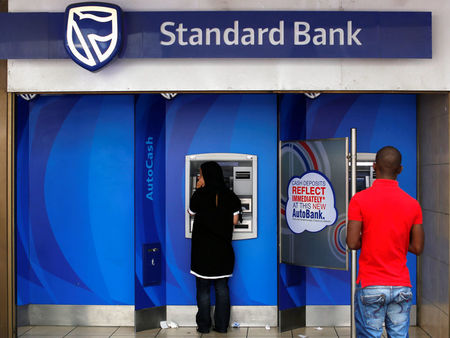 DURBAN, South Africa (Reuters) - South Africa is close to spinning a state-owned bank out of its postal service that will lend to the country's poor and distribute welfare grants, in a bid to loosen the grip of private sector banks.

Financial services, the largest sector of the South African economy at 20 percent of nominal GDP, have long been perceived as being dominated by the country's big four banks.

The government aims to address this through "radical economic transformation", which is understood locally to mean nationalisation and ownership transfers to the black majority.

"It's not going to be a normal bank like the big four. It’s going to be a developmental bank to deal with the market that is not being served at the moment," South African telecommunications minister Siyabonga Cwele told Reuters on the sidelines of the World Economic Forum for Africa on Thursday.

"It's a higher risk, but we are not saying we are going to be reckless in our lending but we must take that risk of funding entrepreneurs with small loans," Cwele added.

Unsecured lending in South Africa is seen as lucrative but risky after the collapse of lender African Bank in 2014 triggered a central bank bailout, but giving a banking licence to the country's Post Office (SAPO) would allow it to use its 1,500 branches to provide credit and other financial services to millions of people without assets.

"We are going to need a very strong risk management system," Cwele said. "The issue of financial inclusion is part of radical economic transformation. We are not talking about reckless access to finance."

A 2016 survey by Finscope found that about 11 percent of the adult population were "financially excluded" or unbanked, accounting for more than 4.3 million adults.

SAPO's Postbank has around 1.4 billion rand (£80.4 million) in excess capital, already enough to meet regulatory minimum requirements for a bank and the Post Office plans to list the business as a bank by July.

Its positive financial position contrasts with SAPO as a whole, which is supported by a 4.4 billion rand state guarantee and is set to record a loss of more than 1 billion rand in the 2015/16 financial year.

In the previous financial year it lost 1.5 billion rand after industrial action prompted major clients to pull out.