By Luc Cohen and Jorge Otaola

BUENOS AIRES (Reuters) - Argentina could revise the fiscal targets set as part of a $50 billion (£37.3 billion) financing arrangement with the International Monetary Fund to increase spending on social programs, an IMF director said on Friday.

Argentina requested IMF assistance on May 8 after a run on its peso currency in an investor exodus from emerging markets. The country's stocks rallied on the deal to provide a safety net and avoid the frequent crises of the country's past.

Many Argentines blame the austerity measures the IMF imposed under a previous bailout during its 2001-2002 economic crisis for plunging millions into poverty, but the organisation said spending on programs to protect the poor could actually increase under the financing arrangement.

"The fiscal targets can be revised in case there is a need to increase social spending," said IMF Western Hemisphere Director Alejandro Werner, adding that Argentina's economy today is "very different than 2001."

"That way, society does not have to choose between building a bridge or protecting the poorest."

As part of the deal announced Thursday night, the government agreed to speed up reductions in the primary fiscal deficit to balance the budget by 2020. The government also pledged to propose legislation for a more independent central bank to fight double-digit inflation, which Werner praised on Friday.

The benchmark Merval stock index (MERV) rose 3.8 percent on the deal. Bonds rose modestly, with Argentina's country risk <11EMJ> - a J.P. Morgan measure of the difference between the country's bond yields and less risky alternatives - down five points at 476 as of 3:56 p.m. local time (1746 GMT).

"The deal between Argentina and the IMF reduces immediate external financing risks and will help speed up fiscal consolidation," said Gabriel Torres, a vice president at credit rating agency Moody's.

The deal still needs approval from the IMF board, which is expected to discuss it at a June 20 meeting. Treasury Minister Nicolas Dujovne said on Thursday he expected Argentina to receive a disbursement of 30 percent of the total, or roughly $15 billion, in the days following approval.

Finance Minister Luis Caputo said the government would not necessarily use the rest of the money and may return to bond markets to finance the estimated $22 billion in financing Argentina needs in 2019 to cover its fiscal deficit.

"If you need it you can use it, but if we regain access to the market at good rates, it is better to save it," Caputo told investors on a conference call, according to a Finance Ministry statement. 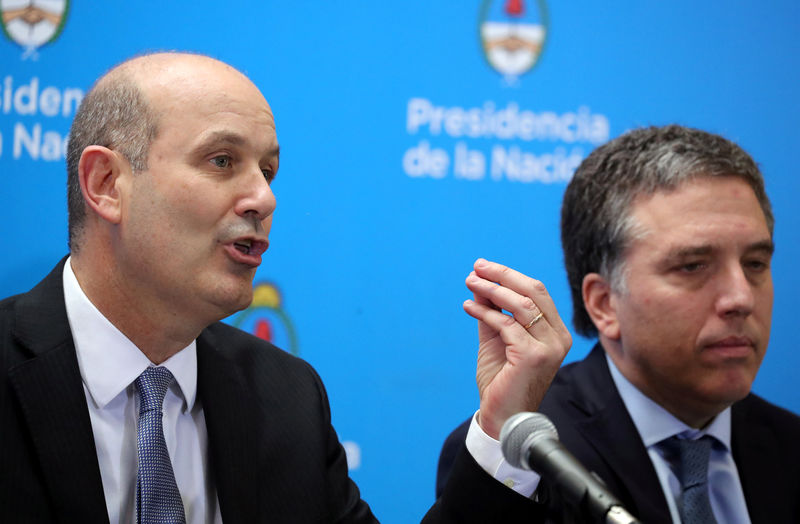 For the past few weeks, the central bank has offered to sell $5 billion in reserves at 25 pesos per dollar every day, effectively preventing the currency from falling below that level. That offer did not appear on Friday, traders said.