By Richard Lough and Jorge Otaola

BUENOS AIRES (Reuters) - Argentine bond prices and stocks firmed on Thursday, with news that international banks may be close to a deal to buy debt from holdout creditors that would resolve its debt crisis.

The creditors are considering an offer from Citigroup (N:C), JP Morgan (N:JPM), HSBC (L:HSBA) and Deutsche Bank (DE:DBKGn) of 80 cents on the dollar for their roughly $1.66 billion (986 million pounds) of Argentine debt, Thomson Reuters IFR reported on Wednesday.

Argentina defaulted for the second time in 12 years last week after the government said it could not reach a deal with the holdout creditors, New York hedge funds that have been demanding face value on bonds they bought on the cheap after the country's economic crash in 2002.

Argentina's Economy Ministry declined to comment but has said previously there was nothing to prevent private parties from reaching an agreement.

In New York, Thomas Griesa, the U.S. district judge at the centre of the bitter legal feud between the two sides, said he would hold a hearing on Friday at 3 p.m. (8 p.m. BST) to address recent public statements by Argentina.

In comments late Thursday night, President Cristina Fernandez goaded Griesa, calling him "a district judge who is overriding the sovereignty of a nation."

"The decisions being made by this district judge don't make any sense at this point," she added.

Both the dollar-denominated Par bonds

Which banks would ultimately purchase the debt remained unclear, a source close to the negotiations told IFR.

"It could turn out to be only two banks that go in for the final deal, with all the jockeying and various simultaneous talks going on," said the source close to the situation.

JP Morgan, Deutsche Bank and Citigroup declined to comment to IFR, while HSBC was not immediately available for comment.

Argentina fell into default after it missed a June 30 interest payment on restructured bonds following a ruling by Griesa that it could not service the performing debt until it had settled its legal battles with the holdouts.

Buenos Aires made the $539 million payment to a U.S. intermediary bank to deliver to bondholders, but Griesa blocked an onward transfer.

"There is no doubt whatsoever that the Republic of Argentina has duly paid the amounts due on the exchanged bonds in the manner required," the government said on Wednesday in a legal notice to creditors who took part in 2005 and 2010 bond swaps.

The blocked funds belonged exclusively to the bondholders, said Argentina, which has heavily criticized the judge and labelled him an "agent" of the New York hedge funds.

Now that Argentina is in default, the holdouts may have lost leverage. If no deal is reached quickly, other bondholders might demand advanced full payment of the principal value of their debt, a process known as an "acceleration."

That would potentially leave the funds, led by billionaire Paul Singer's Elliott Management Corp and Aurelius Capital Ltd, with nothing to show for a years-long courtroom fight.

The funds paid $48 million for the debt from 2001 to 2008 and would make a 1,600 percent profit if repaid in full, Argentina has said. The government depicts the holdouts as vultures.

Sources told IFR the banks were unwilling to absorb all the holdouts' debt and were offering 80 cents on the dollar, or roughly $1.32 billion.

Brazil's state-owned Caixa Economica Federal and development bank BNDES were supporting the talks, said a source close to the institutions, as they seek to avert contagion across the broader Latin American capital markets. 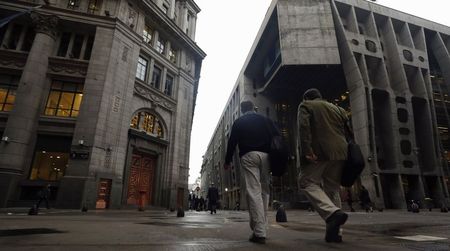 The government on Thursday began proceedings against the United States over its sovereign debt crisis at the International Court of Justice, the U.N.'s highest court for disputes between nations, the tribunal said.