WASHINGTON (Reuters) - U.S. manufacturing output increased solidly in August, boosted by a surge in the production of machinery and other goods, but the outlook for factories remains weak amid rising headwinds from trade tensions and slowing global economies.

The fairly upbeat report from the Federal Reserve on Tuesday came as officials from the U.S. central bank gathered for a two-day policy meeting. Economists said it was too early to conclude that the trade-driven manufacturing recession was over.

Fears that the drag from the trade war could spill over to the broader economy are expected to compel the Fed to cut interest rates again on Wednesday to keep the longest expansion in history, now in its 11th year, on track. The Fed lowered borrowing costs in July for the first time since 2008.

"We would want to see another solid gain in September before we would be prepared to say that there are signs that manufacturing is pulling out of its trade-related slump," said John Ryding, chief economist at RDQ Economics in New York.

Production at factories fell 0.4% in August on a year-on-year basis. Manufacturing, which accounts for about 11% of the U.S. economy, is being hobbled by the U.S.-China trade dispute.

The year-long trade spat has eroded business confidence, leading to a slump in the sector, which ironically the Trump administration has sought to protect against what it has called unfair foreign competition. Despite last month's rebound in manufacturing output, factory surveys remain downbeat, suggesting the turnaround in production was likely temporary.

Manufacturers in New York state were also less upbeat about business conditions over the next six months, with a measure of capital expenditures dropping to a three-year low.

"We expect manufacturing and capex spending to remain under pressure over the next few months as trade uncertainty still swirls, global growth remains meagre and the strong dollar creates an added hurdle for U.S. exporters," said Sarah House, a senior economist at Wells Fargo (NYSE:WFC) Securities in Charlotte, North Carolina.

Manufacturing is also weakening as the boost from last year's $1.5 trillion tax package fades. Cuts in the production of Boeing's (N:BA) 737 MAX aircraft, which was grounded indefinitely in March following two deadly crashes, are also adding to manufacturing's malaise.

Manufacturing and housing are main areas of weakness in the economy, which is being driven by robust consumer spending.

A separate report from the National Association of Homebuilders on Tuesday showed homebuilders' confidence edged up in September. Builders said while lower interest were supporting demand, land and labour shortages remained a constraint.

The Atlanta Fed is forecasting gross domestic product rising at a 1.8% annualised rate in the third quarter. The economy grew at a 2.0% pace in the April-June quarter, stepping down from the first quarter's 3.1% rate.

The dollar slipped against a basket of currencies ahead of Wednesday's rate decision. U.S. Treasury prices rose, while stocks on Wall Street were little changed.

Manufacturing has also been hurt by an inventory overhang, mostly in the automotive industry. Motor vehicles and parts production fell 1.0% last month after increasing 0.5% in July.

A strike by about 48,000 General Motors (N:GM) workers could further dent motor vehicle production, but much would depend on the duration of the work stoppage, which started on Monday.

Excluding motor vehicles and parts, manufacturing output increased 0.6% in August after declining 0.5% in the prior month. Machinery output rebounded 1.6% after dropping 1.7% in July. Primary metals production increased 1.3%. There were also gains in furniture and computer and electronic products output.

Mining production in July was depressed by Hurricane Barry, which disrupted oil extraction in the Gulf of Mexico.

Oil and gas well drilling fell 2.5% last month, decreasing for a second straight month. Energy firms have been cutting spending on new drilling to focus more on earnings growth instead of increased output. This has contributed to weakness in business investment, which contracted in the second quarter for the first time in three years.

Economists said it was unclear whether an attack on Saudi Arabia's oil facilities, which has boosted oil prices, would have an impact on drilling activity in the United States, adding much would depend on the size and sustainability of the price gains.

Capacity utilization for the manufacturing sector, a measure of how fully firms are using their resources, increased to 75.7% in August from 75.4% in July. Overall capacity use for the industrial sector rose to 77.9% from 77.5% in July. 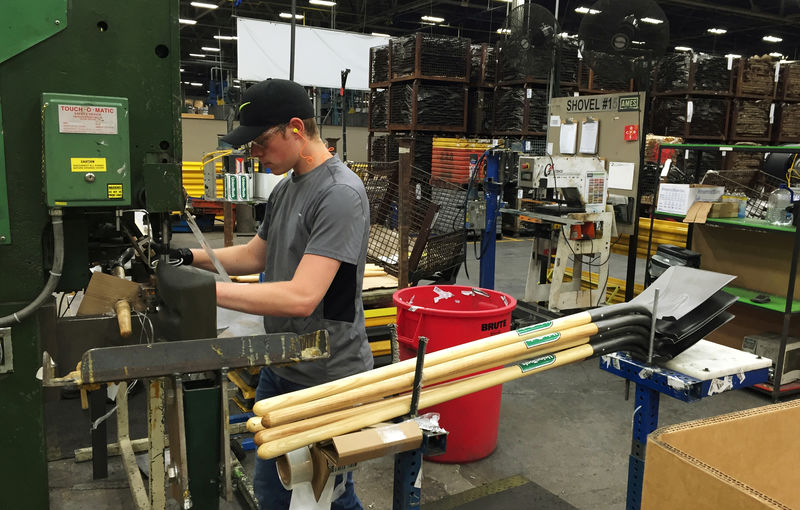 It is 1.9 percentage points below its 1972-2018 average. Officials at the Fed tend to look at capacity use measures for signals of how much "slack" remains in the economy — how far growth has room to run before it becomes inflationary.