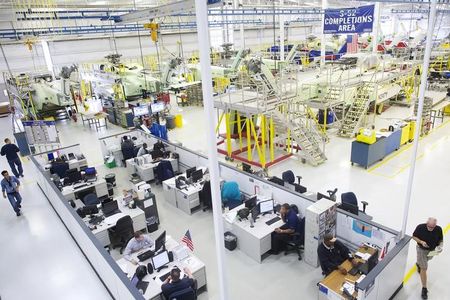 MADRID (Reuters) - - Spain's manufacturing sector contracted for a sixth month in November as weak overseas demand and domestic political uncertainty continued to drag, although rebounds were seen in all segments, a survey showed on Monday.

Markit's Purchasing Managers' Index (PMI) of manufacturing companies rose to 47.5 last month from 46.8 in October. It has remained below the 50 line separating growth from contraction since June.

"Whilst the relative improvement in this month's PMI raises hopes that the worst of the industrial downturn is passing, the sector remains a notable drag on the Spanish economy and is set to weigh on GDP figures for the fourth quarter," IHS Markit Economics Director Paul Smith said in a statement.

Output also rebounded to 47.5 in November from 46.3 in October, when it took its sharpest dive in 6-1/2 years, hit by political turmoil at home and abroad, Markit said.

The socialist leader won a snap election last month, the fourth in as many years in Spain, but the results were again inconclusive and left an even more fragmented parliament.