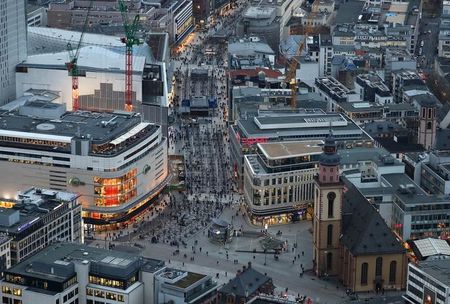 (Bloomberg) -- Germany’s economy is heading for a steep recession as attempts to slow the outbreak of the coronavirus pandemic send services sector into an unprecedented slump.

IHS Markit’s gauge of manufacturing and services activity plunged in March. It signals that GDP in the euro area’s biggest economy could drop by around 2% in the first quarter -- with worse to come.

“The escalation of measures to contain the virus outbreak mean we should be braced for the downturn to further intensify in the second quarter,” said IHS economist Phil Smith. Services in particular have deteriorated “at a rate that already far surpasses anything seen even during the depths of the global financial crisis.”

Chancellor Angela Merkel has tightened restrictions on public gatherings and ordered stores and restaurants to close. To cushion the blow, the government is abandoning its long-standing commitment to balanced budgets and will go on a borrowing binge to finance a stimulus package of more than 750 billion euros ($800 billion).

Markit’s composite purchasing managers index fell to 37.2 in March from 50.7 a month earlier, though it said the situation is far worse than the headline figure suggests because the crisis is distorting the data.

Figures for France earlier showed that country in a record economic downturn.