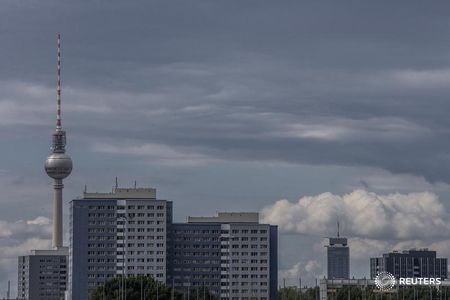 BERLIN (Reuters) - Investor morale in the euro zone fell for the first time in four months in February over fears that China will not be able to contain the coronavirus outbreak, a survey showed on Monday.

Sentix's index for the euro zone fell to 5.2 from 7.6 in January. The Reuters consensus forecast was for a fall to 4.1.

The slight drop reflects the fact that investors think the economic damage from the novel virus has been mostly limited to China, said Sentix chief Manfred Huebner, adding that the global economy was getting impetus from the United States.

"The outbreak of the coronavirus and the subsequent drastic measures taken by the Chinese government cast a shadow over the economic outlook," said Huebner. "Fortunately, so far the effect is limited."

He added: "However, in view of the significant declines in Chinese economic data, it is clear that the negative effect is likely to be much greater if it does not become apparent in the coming days that the spread of the virus has been taken away."

Reflecting such fears, a sub-index measuring investor expectations in the euro zone fell to 6.5 from 9.8 in January.

While morale deteriorated in Asia and the euro zone, the picture was different in the United States, which is showing resilience, the survey showed. The index for the world's biggest economy rose to 20.3 from 15.9 in January, reaching its highest level since November 2018.