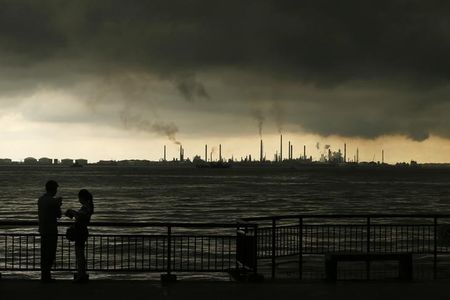 (Bloomberg) -- Oil fell for a second day -- dropping below $41 a barrel in New York -- after a surprise jump in U.S. crude stockpiles and a gloomy forecast from the International Energy Agency weighed on the demand outlook.

American crude inventories rose by 4.28 million barrels, climbing for a second week in three, according to data from the Energy Information Administration on Thursday. The IEA cut its global oil demand projections for this quarter by 1.2 million barrels a day in its latest monthly report.

Oil is still up 9% this week, however, after news of a potential Covid-19 vaccine breakthrough spurred a sharp jump in prices on Monday. The market has also been supported by indications that the OPEC+ alliance is closing in on a deal to delay a planned easing of output cuts.

While the vaccine news has provided oil with a strong tailwind, there’s still a lot of uncertainty about how quickly it could be rolled out. Three of the world’s top central bankers warned that it wouldn’t be enough to put an end to the economic challenges created by the pandemic. The IEA also cautioned the breakthrough won’t quickly revive energy markets that are being rattled by a second wave of Covid-19 that’s pummeling Europe and the U.S.

“The realities are setting in that the expectations for an immediate vaccine cure may be a bit far-fetched,” said Kim Kwangrae, an analyst at Samsung (KS:005930) Futures Inc. in Seoul. “Prices will be pressured in the short run as global demand stays suppressed with the unrelenting surge in coronavirus cases.”

Brent’s three-month timespread was 82 cents a barrel in contango -- prompt prices are cheaper than later-date ones. That’s near the narrowest contango since July, signaling concerns about over-supply have eased.

U.S. gasoline stockpiles fell by 2.31 million barrels last week, and distillate inventories, which includes diesel, dropped for an eighth week, the EIA said. Nationwide crude supplies were expected to decline by 1.9 million barrels, according to the median estimate in the Bloomberg survey.

OPEC+ meets at the end of the month to discuss its production policy and the alliance has already indicated it may need to defer increasing supply from the start of next year. Complicating the group’s efforts to manage the market is rising output from Libya, which now exceeds 1 million barrels a day.