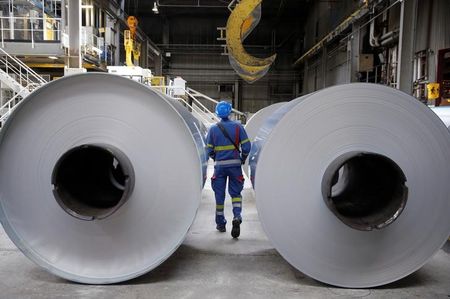 OSLO (Reuters) - Norsk Hydro (OL:NHY), one of the world's biggest aluminium producers, said on Monday it plans to cut production by 20% at its majority-owned Slovalco plant in Slovakia, citing a weakening market.

The plant has an annual production capacity of 175,000 tonnes of primary aluminium, the firm said.

"This is in line with what we have said earlier: that we see a demanding market, it is something we've seen throughout the autumn, and we have lowered our growth forecast throughout the year," Norsk Hydro spokesman Halvor Molland said.

The production cut is expected to start next month, provided it is formally approved at the plant's annual general meeting.

Hydro said in October that it expected global demand outside China to be largely flat in 2020, in a range from negative 1% to 1% growth, while domestic Chinese demand will likely rise by 1-3%.

The plant also has a casthouse capacity of close to 200,000 tonnes.