At a glance, it looks doomed, lying at the bottom of the heap with a loss of more than 20%—officially the worst performing commodity of 2019.

But scratch a little beneath the skin of its charts and fundamentals, and prices of orange juice look like they could make a splash in the coming months.

At Tuesday’s settlement of 98.33 cents a lb, the front-month December contract in frozen concentrated orange juice has rebounded far from the near 10-year low of 90.30 cents struck in May. 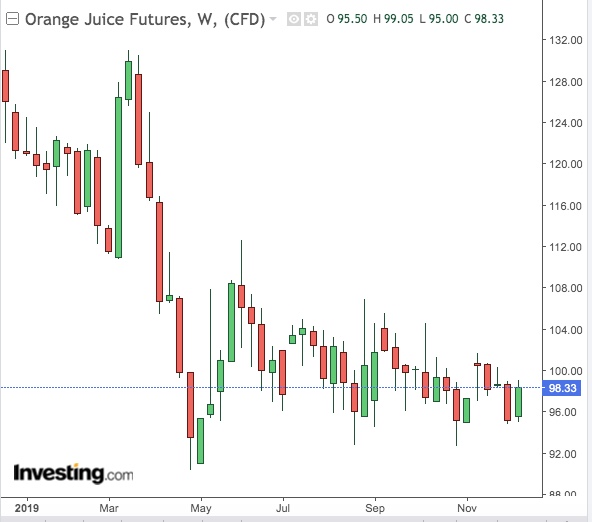 If it retains its bounce, the market could be headed for a second straight week of gains despite showing a slight loss for December, a 1.3% slide for the fourth quarter and a gaping 21.4% slump year-to-date.

For Believers In Orange Juice, The Risk/Reward Is Getting Better

“The chart structure is improving on a daily basis for OJ; therefore the risk/reward will become more in your favor in next weeks trade.”

America’s favorite breakfast staple has seen better, trading at $2.35 three years ago. But fundamentals have taken a turn for the worse since.

Oversupply Needs To Be Cleared First

The U.S. Department of Agriculture reported last week that cold storage holdings of FCOJ reached 757.8 million pounds on Oct. 31, the highest total for the date in five years and nearly 200 mln pounds more than on the same dates in 2018 and 2016.

“Good growing conditions and increased oranges production estimates by USDA this season have been bearish.”

“The weather has been great for the trees as there have been frequent periods of showers and no severe storms so far this year.”

“Crop yields and quality should be high for Florida this year. Inventories of FCOJ in the state are high and are more than 35% above last year.”

Citrus growers in Brazil and Mexico have locked long-term contracts with big U.S. juice brands such as Minute Maid and Tropicana since 2017 after Hurricane Irma wiped out almost all of Florida’s orange crop in September that year. Those supply agreements virtually dictate U.S. juice prices now, aside from local fundamentals and FCOJ technicals.

“It looks to me that orange juice prices are bottoming, as we basically have gone sideways over the last 3 months. As we head into the very volatile winter season for Florida, a possible frost can devastate the orange juice crop.”

“It is still early at this point, but I'm looking to play this to the upside as I do believe the downside is very limited.”