On Sunday 25th September Germany will go to the polls. Chancellor Angela Merkel is widely expected to win her fourth term in power, Oddschecker has Merkel’s victory at a 97% probability. The latest polls put her CDU party at 28%, with the opposition Social Democrats at 23%. While Merkel’s party is not likely to win an outright majority on Sunday, German governments have tended to be coalitions since the Second World War.

Why a German political shock is highly unlikely

The coalition issue is a key one for investors as it’s the main reason why we are confident that the polls are correct and Merkel will be the next Chancellor. This is an important point for investors, in recent elections the polls have been wrong and the underdog has won turning the political status quo on its head and triggering a spike in volatility. We don’t think that the same political shock will come from Germany for two reasons.

Coalition options after the election

Interestingly, there are good reasons to suggest that either the “Jamaica” coalition or the Grand coalition will be good news for German asset prices, which is one reason why the Dax is rallying this week ahead of Sunday’s vote.

As we mentioned, a deal between the CDU/FDP/Greens could be seen as pro-business, with the FDP potentially securing corporate tax cuts as the price to support Merkel in this three-way coalition. This is, unsurprisingly, good news for German business and thus the Dax. Equities that could be boosted by a “Jamaica” coalition include:

The CDU/SPD grand coalition may also be good news for German stock prices as the SPD may put pressure on Merkel to loosen the purse strings and boost public spending on infrastructure in her fourth term as Chancellor. This could boost the engineering and metal big hitters on the Dax in the aftermath of the coalition being announced, including:

The Dax is likely to be sensitive to the outcome of the German election and we believe that there is the potential for further strength as long as 1. Merkel wins, 2. the AfD don’t win more than 12% of the vote.

However, we also note that the Dax is influenced by multiple factors including the strength of the euro. In fact, the chart below shows that it is the euro, rather than Merkel that matters more for the German stock index. This suggests that even if Merkel is reinstated as Chancellor, as expected, if the euro rises sharply then the Dax may be more sensitive to the rising currency and its impact on exporters than it is to domestic politics. This is due to the inverse correlation between the Dax and the euro, so when the euro rises the Dax tends to fall, as you can see in the chart below. 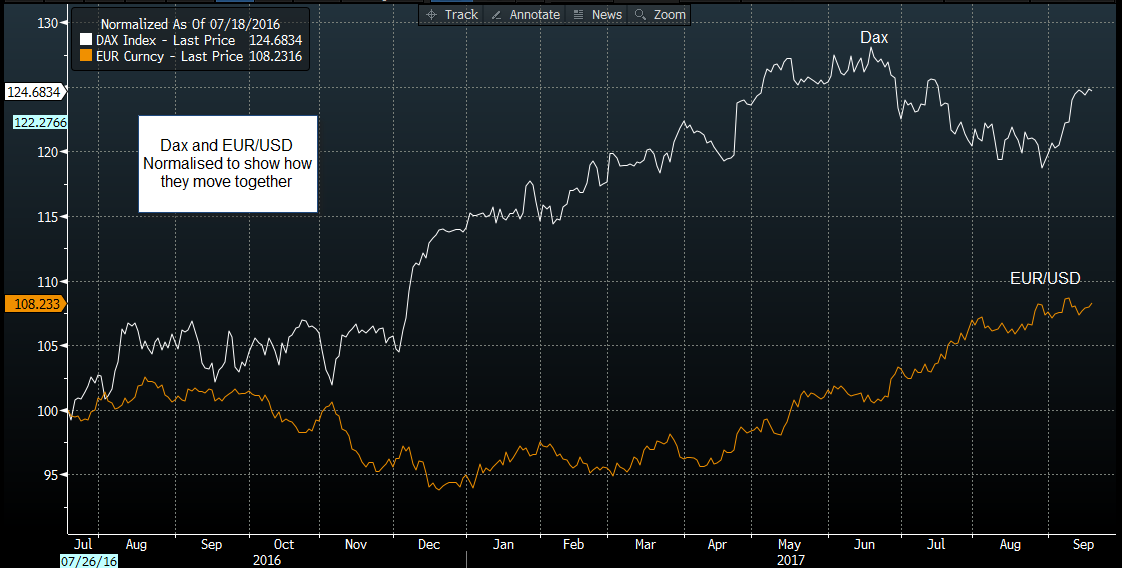 The 1-week EUR/USD At-the-Money option volatility is currently at 9.3% with 5 days’ to go before the vote, which is actually a touch less than the Vix at 9.95%. Although this level has been rising since July, it remains incredibly low and is far lower than it was ahead of the first round of the French election in April when it surged to 18.66. This suggests that FX traders are sanguine that the German election will not throw up a surprise that could trigger a sharp move in the euro. So, if Merkel’s CDU wins approx. 36% of the vote as expected, then we do not expect any outsize moves in the euro at this stage, although we would expect the single currency to drift higher at the start of next week upon confirmation that Merkel has secured a fourth term as Chancellor. 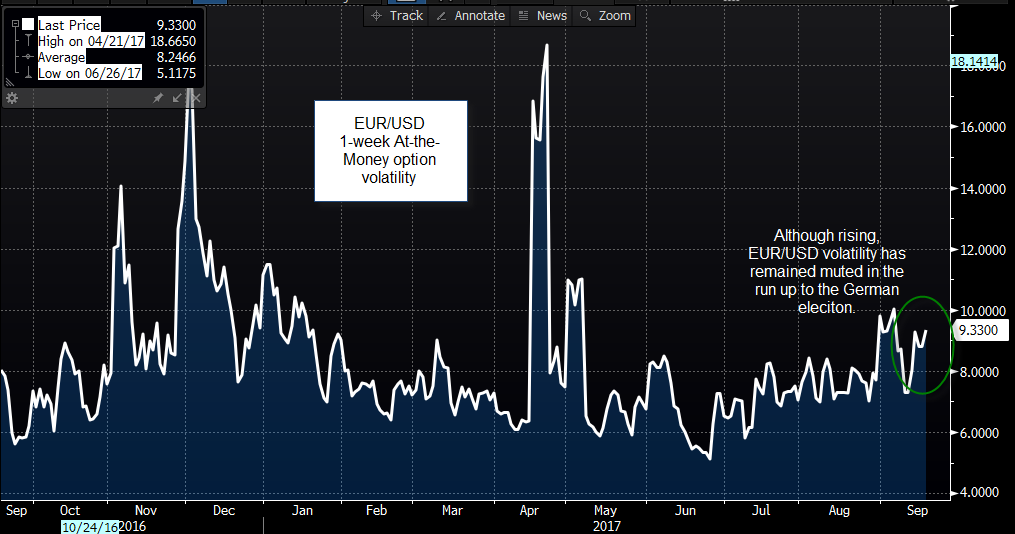 German Election Strategy: the Dax vs. the FTSE MIB

Our one to watch this German election is a relative value trade between the Dax and the Italian FTSE MIB. The Italian index has outperformed the German and overall European index since March this year, although its performance really took off over the summer, as you can see in the chart below. However, we believe that with the German election out of the way political risk in Italy, which needs to hold an election by Q1 2018, may start to rise, which could weigh on the Italian index. Also, after strong gains in recent months, the Italian index is looking less attractive from a valuation stand point, which may also support the Dax to outperform in the coming months. 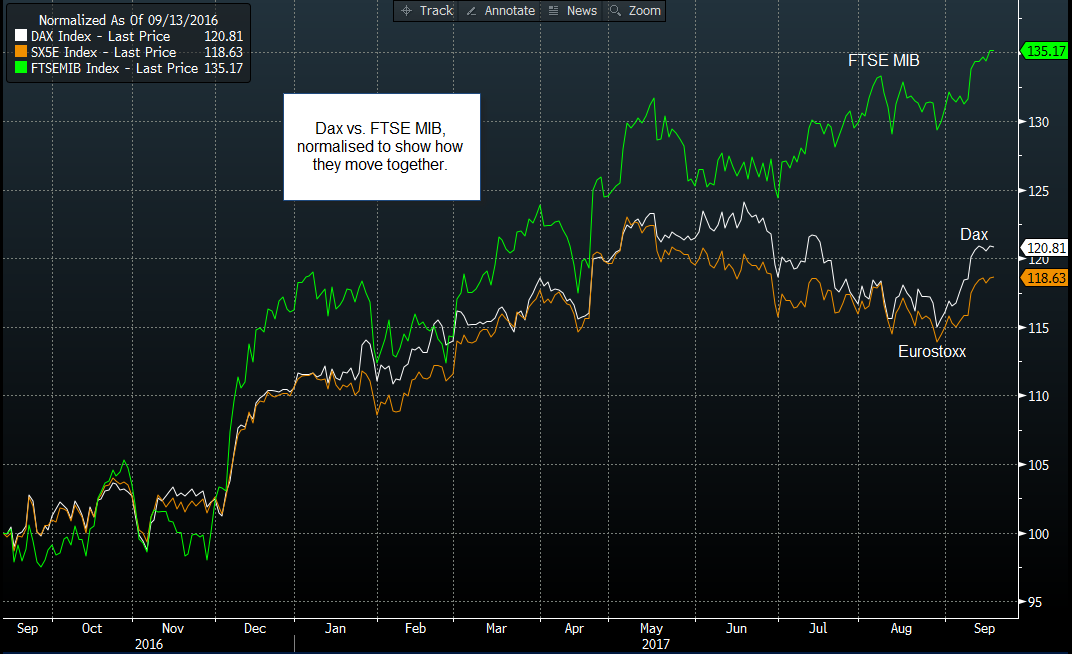 German equities - could get a boost once the next German coalition government is confirmed.

The Dax - could benefit from a win for Merkel, and we expect it to outperform the FTSE MIB in the coming months, although it remains sensitive to euro strength.

The euro - nothing in the market is telling us to expect a big move in the euro on the back of an expected win for Merkel’s CDU party this weekend. With EUR/USD hovering around $1.20, the highest level since early 2015, this is unsurprising.

Disclaimer: The information and opinions in this report are for general information use only and are not intended as an offer or solicitation with respect to the purchase or sale of any currency or CFD contract. All opinions and information contained in this report are subject to change without notice. This report has been prepared without regard to the specific investment objectives, financial situation and needs of any particular recipient. Any references to historical price movements or levels is informational based on our analysis and we do not represent or warrant that any such movements or levels are likely to reoccur in the future. While the information contained herein was obtained from sources believed to be reliable, the author does not guarantee its accuracy or completeness, nor does the author assume any liability for any direct, indirect or consequential loss that may result from the reliance by any person upon any such information or opinions.