Where Are Cryptocurrencies Headed In The Second Half of 2017?

Where Are Cryptocurrencies Headed In The Second Half of 2017?

The sharp gains and wildly volatile trading in cryptocurrencies during the first half of 2017 have raised questions over where trading in digital currencies will go during the second half of the year. 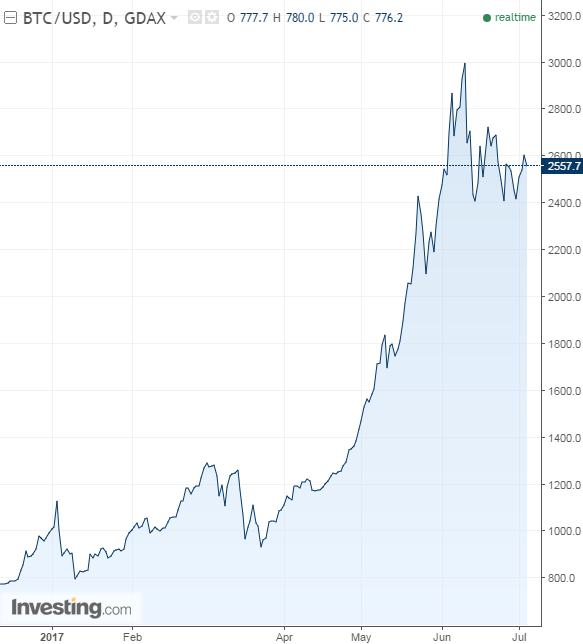 Bitcoin touched an all-time high of $3,000 on June 11 only to fall 27% in the following days. It ended the first half of the year at $2,436.7, after more than doubling its price in the previous three months.

The meteoric rise of Bitcoin was due in large part to increased demand in Asia. At the start of April, new rules went into effect in Japan that gave Bitcoin official recognition as a legal currency, with major retailers starting to accept it as a payment method.

But Bitcoin has come under pressure amid a growing rift between developers and businesses over how best to increase the digital currency’s trading capacity, since transaction speed has slowed as trading volume has grown. As a result, Bitcoin could be broken into separate, competing coins.

New proposals addressing this issue are expected to launch later this year, which could result in changes to the Bitcoin network’s processing capacity, referred to as a fork, or splitting the currency into two separate entities, hard and soft fork versions.

Fears over a potential split in the currency have curbed investor demand for Bitcoin and bolstered demand for the newer alternative, Ethereum. 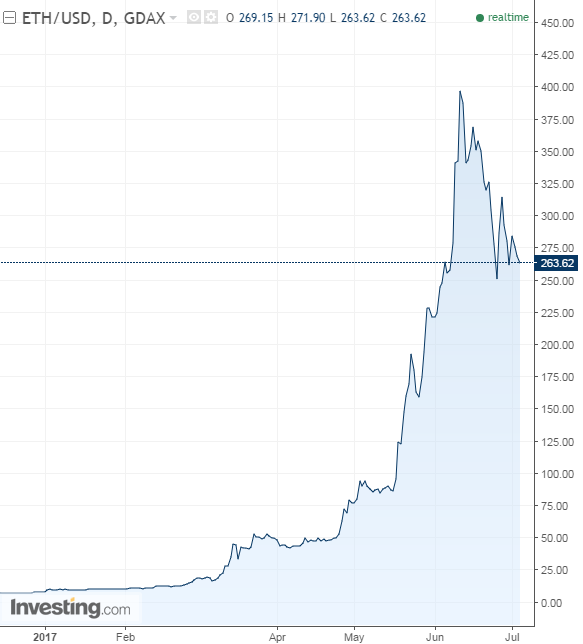 Ethereum, which launched in 2015, is the largest cryptocurrency by market capitalization after Bitcoin, according to Business Insider.

Bitcoin currently has a market cap of around $41 billion, while Ethereum has a total valuation of around $26 billion.

There are, however, a few key differences between Bitcoin and Ethereum. Some are technical, such as the time it takes to complete a transaction, but the most important difference has to do with the purpose of the coins.

Bitcoin was created as an alternative to fiat money; it's a purely digital currency. Ethereum developers on the other hand, set their sites on forging a platform that facilitates peer-to-peer contract, or as some refer to it, "smart contracts." The simplified explanation: Ethereum transactions of any sort would level the playing field for buyers and sellers by enabling payment to be released concurrently with fulfillment of transaction conditions.

While both Bitcoin and Ethereum compete as cryptocurrencies, they aren't in fact meant to be directly competitive.

In recent years, interest in cryptocurrencies has shifted to their underlying technology, blockchain. Potentially, this could cause a greater revolution in the financial world than digital currencies themselves.

A blockchain is a distributed ledger of financial transactions, stored in blocks, which is maintained by a network of computers on the internet.

Once recorded, the data in a block cannot be altered without the alteration of all subsequent blocks on the network. In May of this year, global fintech consortium R3 raised around $107 million in financing to develop commercial applications for the distributed ledger technology at the heart of blockchain.

Banks are hoping the technology, which verifies and tracks transactions on its own, could eventually help them reduce the complexity and costs of activities like trading settlement and international payments.

In the second half of 2017, the price of both Bitcoin and Ethereum is likely to be driven by initial coin offerings, or ICOs, which have emerged as a favored fundraising tool with which to launch new cryptocurrencies. An ICO is a cross between crowdfunding and an initial public offering that sells digital tokens, or “coins,” created through blockchain technology in exchange for cryptocurrencies of immediate value.

Ethereum’s development was initially funded by an ICO. With speculator appetite for blockchain rapidly expanding, the price of Bitcoin and Ethereum is likely to continue to rise as funds are being raised in those currencies.

Beyond Bitcoin and Ethereum

Litecoin and Ripple were, respectively the long-standing number-two and number-three cryptocurrencies, before the arrival of Ethereum. 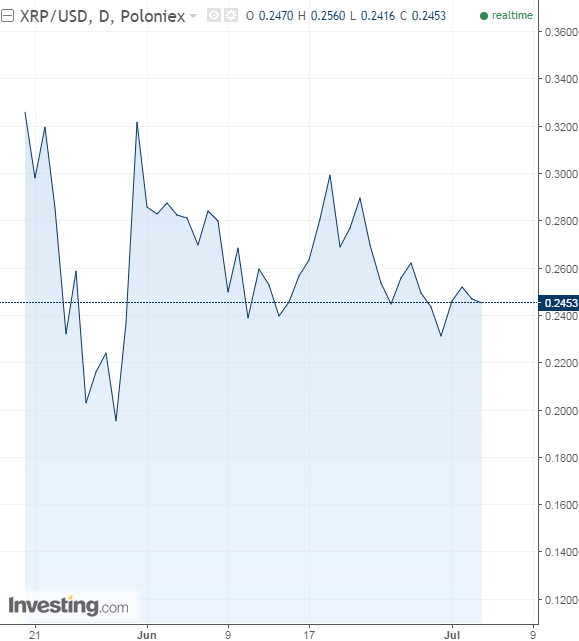 In recent years, Ripple has surpassed Litecoin in market cap, making it the current number-3 after Bitcoin and Ethereum.

Much like Bitcoin and Ethereum, Ripple and Litecoin have different purposes. Ripple is a payment protocol, a secure way to represent and transfer any unit of value. It is used by banks, such as UBS (NASDAQ:UBSI) and Santander (NYSE:SAN), and can't be mined, meaning creation of additional Ripple coins is centralized and can only be done by the owner or one of his representatives with knowledge and access to the appropriate technology. 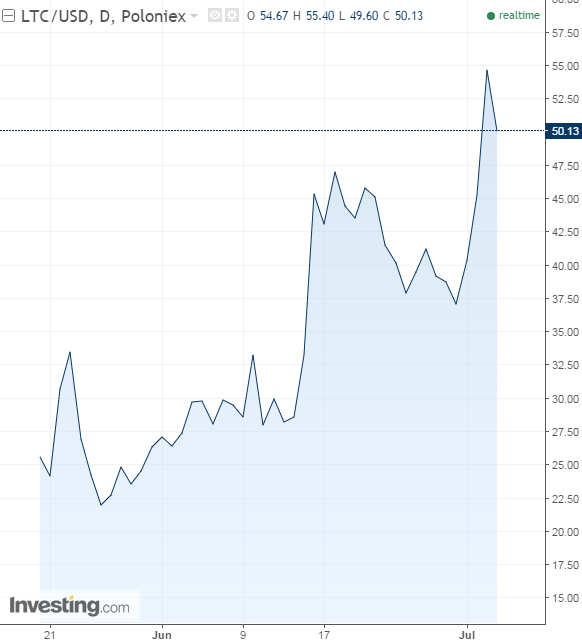 Litecoin, though similar to Bitcoin, is technically more advanced since transactions can be processed more quickly, reducing the types of bottlenecks often seen with Bitcoin trades.

On a day-to-day basis, however, cryptocurrency price volatility will continue to be controlled by traders. One thing is certain: 20% flash crashes or equally violent jumps within mere minutes are not yet a thing of the past in this arena. 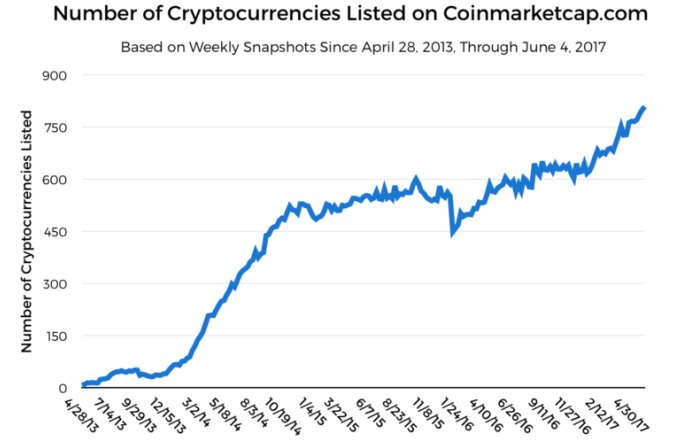 According to recent data, there are more than 800 different cryptocurrencies available today, including coins with such esoteric names as MarxCoin, PonziCoin, SelfieCoin, and PutinCoin, with additional currencies coming to market all the time. This is why the talk of a bubble continues to surface.

The possibility of such stratospheric profits greatly explains the current, swelling tide of interest in cryptocurrencies, which is pushing anything and everything in this realm higher.

With such potentially lucrative profits in play, it's no surprise that fund management groups and companies are also looking to enter the virtual currency domain.

Grayscale's Bitcoin Investment Trust (OTC:GBTC) is an ETF traded over the counter, meaning off established exchanges; the company describes the fund as the first "publicly quoted security invested in deriving value from the price of Bitcoin." The ETF doesn't exactly mimic Bitcoin's performance, as it trades at a premium compared to the BTCUSD pair. The fund had extraordinary returns in May, when it gained 248% to Bitcoin's 72%. Since the beginning of 2017, the ETF is up 199% to Bitcoin's 129%.

Others are proving eager to join the fray, not always with immediate success. In a decision released on March 10 of this year, the US Securities and Exchange Commission (SEC) rejected an application by Tyler and Cameron Winklevoss to list their Winklevoss Bitcoin ETF (COIN) on the Bats BZX exchange. At the time, the SEC said the denial of the Winklevoss bid was due to the risk of fraud and lack of regulation of world Bitcoin markets.

On March 24, Bats appealed the verdict by filing a petition for review of the rejection. A month later the SEC agreed to consider Bats' petition. Potential Bitcoin investors await the next round of deliberations on the matter and a possible reversal of the original SEC decision. Bitcoin prices surged on the review announcement. Still, according to CNBC, there's a high bar for approval.

Last month, Zug, Switzerland-based Crypto Fund AG, announced that they plan on launching the Cryptocurrency Fund, a European mutual fund based on the Cryptocurrency Index, which will invest in the most prominent virtual currencies including Bitcoin, Ether, Ripple and other well-established cryptocurrencies. The fund is scheduled to launch sometime in Q4 2017.

Along with investment fund recognition, there are an additional number of fundamental factors that can help boost cryptocurrency prices in the second half of the year. Official recognition by governments, acknowledging at least some of these virtual currencies as legitimate will add to their uptake, and thus demand. Japan has recently deemed Bitcoin a legal form of payment, sending that coin to record highs on the announcement.

Fund recognition and official sanctioning of virtual currencies could in turn bring broader mainstream attention. Today, even as interest in cryptocurrencies grows, only a small minority of the population is aware of its existence and inner workings—while even fewer actively participate in trading. As opportunities to use cryptocurrencies in daily life grows, so too will their value.

Finally, Bitcoin, Ethereum and others can be viewed as "disaster hedges" since they're unregulated and exist independently of federal governments and central banks which could prove invaluable during times of war or major catastrophe. Though their volatility prevents them from being true safe havens, if the situation with North Korea, for instance, were to go haywire, we fully expect Bitcoin and coins of similar ilk will skyrocket in value.

Some may argue that without broader uptake and more reliable governmental oversight of the still nascent but burgeoning virtual currency world, there's little to recommend the highly volatile, wild-west environment that seems to currently characterize the "digital token" universe. It seems as if buzz and headlines are the major drivers. As well, catastrophic safe haven status is a pretty slim niche for a new financial product let alone for an entirely new asset class.

For all those who believe in the future of cryptocurrencies, there are many who think they're a bubble. In early June, for instance, noted billionaire investor Mark Cuban tweeted about Bitcoin, "I think it's in a bubble...I'm not questioning value. I'm questioning valuation."

Is he correct about Bitcoin and its sister assets? Or are crytpocurrency early adapters onto something new, smart and potentially highly lucrative?

Wow! New 2018 VW POLO Could then Probably Possibly almost be the NEW!!! GOLF ERA or Something More Spectacular. ... Would be Exceptionally GREATE!  ... (Read More)