Week Ahead: Stocks To Hit Resistance As Sentiment Flips Between Risk, Safety

Week Ahead: Stocks To Hit Resistance As Sentiment Flips Between Risk, Safety

Market sentiment remains unstable, whipsawing between risk-on and -off. That volatility is likely to endure into the upcoming trading week.

Investors will continue to waver between two conflicting narratives: optimism fueled by reports of progress toward developing a coronavirus vaccine along with positive economic data, versus escalating worries created by the relentless spread of the virus for which, to date, there are almost 14.3 million confirmed cases worldwide, along with upward of 602,100 fatalities.

Friday's trade encapsulated the situation rather efficiently. Though most US equities advanced, to finish the trading week on a positive note, gold—perhaps the quintessential safe haven asset—also saw its strongest weekly gains on the final day of trade as the dollar fell.

Oil slipped, pressured by negative sentiment as the ongoing spread of COVID-19 accelerated.

Weekly Gains But On Thinner Volume

Equities posted the third weekly advance in a row for the first time since December. Bulls were able to take advantage of thin volume, which was about 25% below the 30-day average.

As well, on Wednesday, the S&P 500 Index posted its highest price since Feb. 21, which was the first day when stocks plunged on coronavirus jitters, on an intraday basis. 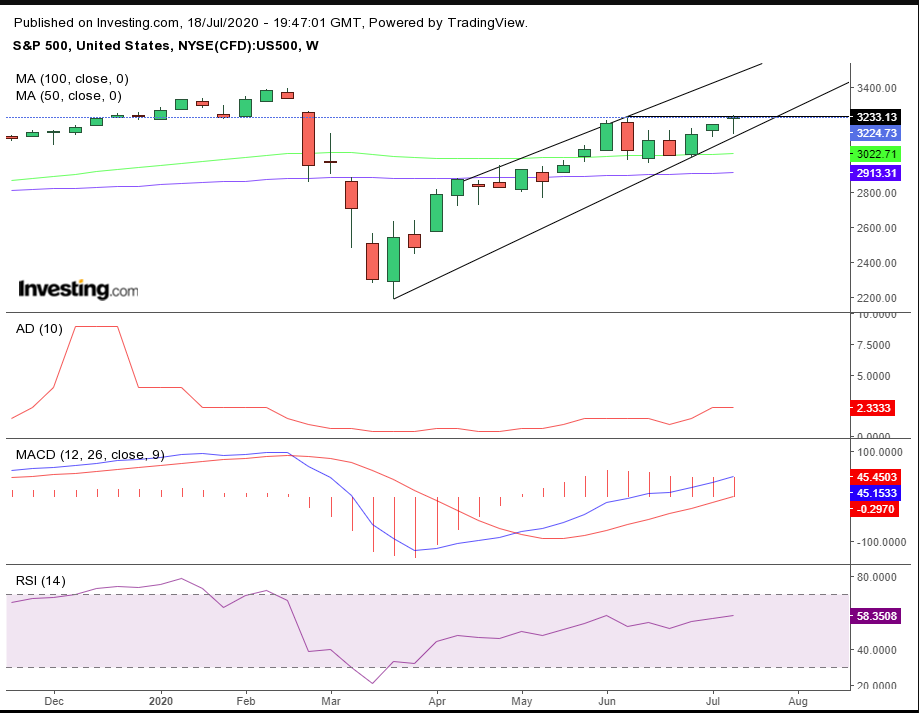 On Friday, the SPX saw its third small body in a row, a second doji within three days. Trading developed a weekly hanging man. Should next week’s candle close below its real body, it will confirm a bearish signal.

The MACD, RSI and the Advance-Decline line all rose with the price. However, they are very far below their previous levels, giving the price all the room the benchmark index needs to keep climbing. However, if next week’s price confirms the hanging man, these indicators will have proven to be a bull trap.

Last week, investors found solace in fresh data supporting a V-shaped economic recovery. US Retail Sales beat expectations, surging 7.5% in June. Spending, versus this metric, is nearly at their pre-COVID levels, after two months of gains. In addition, Industrial Production blew past estimates, gaining the most since 1959.

A continuous string of better-than expected economic releases has been undergirded by unprecedented monetary and fiscal policies. As well, the market appears to be pricing in the fact that Congress will reach an agreement on a new aid package, since its initial, expanded unemployment benefits expire at the end of July. This additional stimulus will be necessary to help support a swift economic recovery, which already generated the best quarter for stocks in decades.

Conversely, US Consumer Sentiment posted an unexpected decline in July, amid the widespread resurgence of coronavirus.

We expect that the market will continue to fluctuate. We've developed a somewhat dramatic mental image, picturing investors wearing both the masks of comedy and tragedy. Upon the release of good news about a vaccine they turn their heads to show the smiling mask; when reports of escalating coronavirus cases surface along with the rising death toll, they present the tragic face.

Nevertheless, since the news tends to shift so rapidly, investors remain unable to settle on a single trajectory—or narrative. Expect confusion and violent reversals in either direction to continue. And keep in mind, the road toward an effective and reliable coronavirus cure remains long, and potentially uncertain.

One expert warns “there will be another wave, and it will be very serious.” He also cautions that even if after there's a vaccine, because of logistics, it won’t reach most of the world. He believes the virus will only stop when everyone who is susceptible to it will have been exposed.

Yields, including for the 10-year Treasury note, provided a negative divergence to rising stocks. 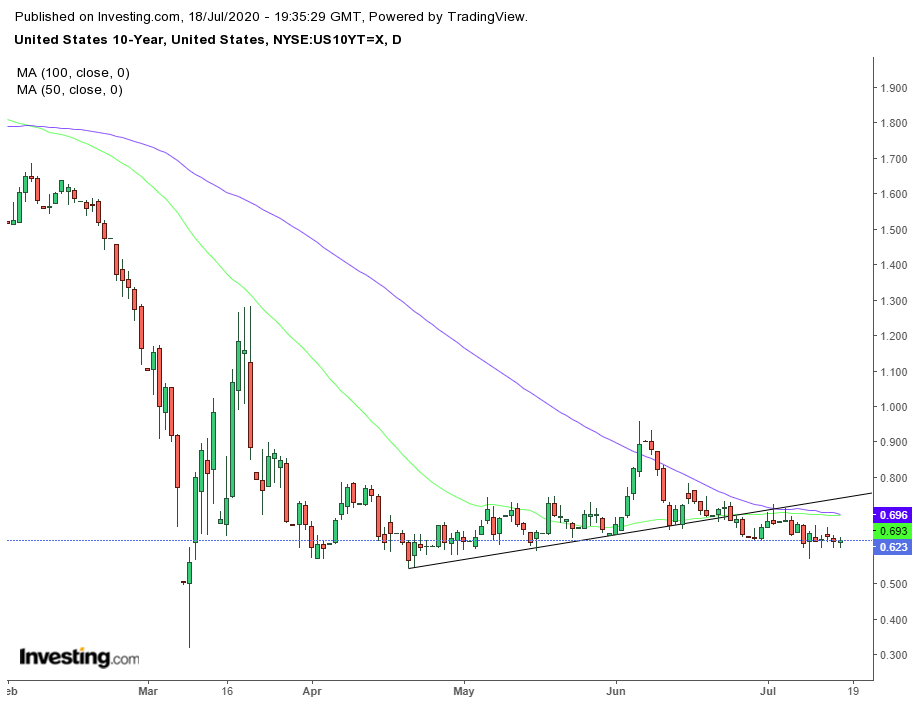 Rates remain as low as they’ve been since April.

The VIX, also demonstrated a negative divergence to advancing equities. 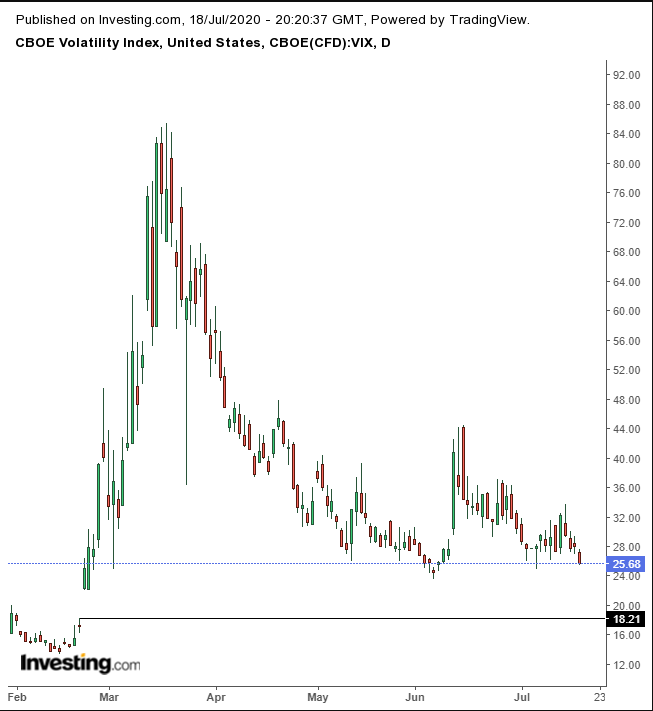 The volatility index remained above May and June lows, as well as higher than pre-COVID levels.

The dollar dropped for a fourth straight week. 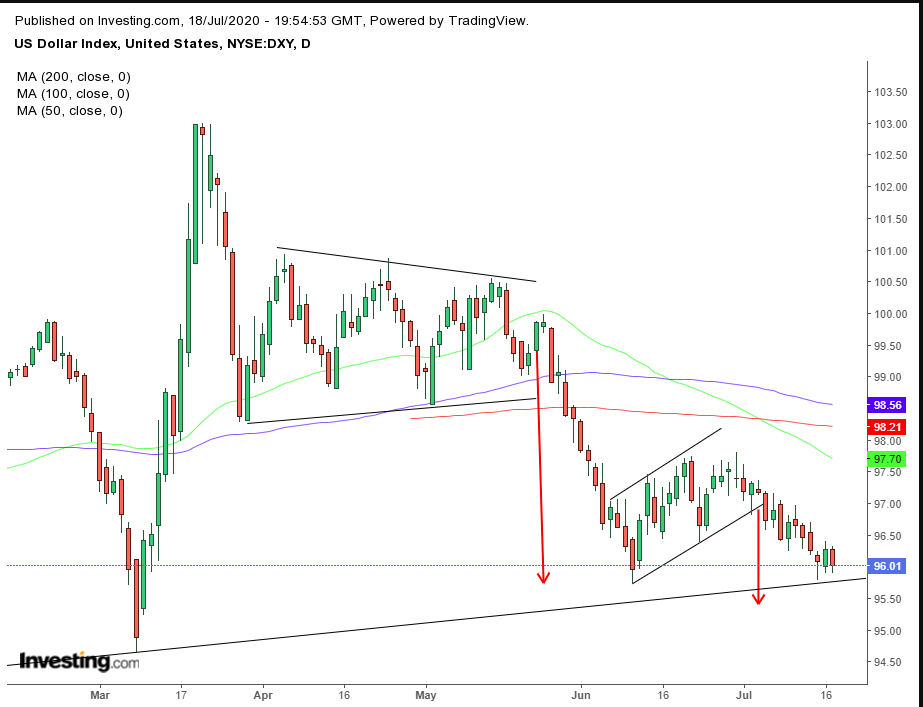 It was the longest losing streak for the global reserve currency since early January. The USD completed a rising flag, bearish after the preceding plunge, during which time it triggered a Death Cross. The bearish pattern’s implied target falls well below an uptrend line since February 2018, as well as the March lows. 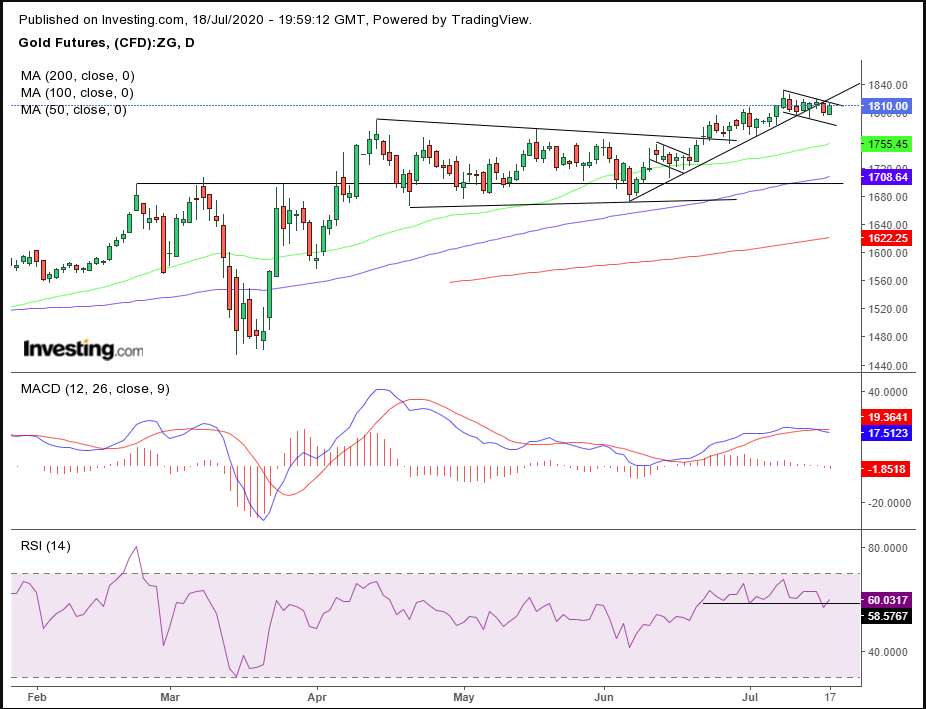 The precious metal found resistance at the top of a falling flag, a bullish pattern within a rising trend. An upside breakout will have allayed a recent concern of ours over a pullback before a continued rally. The RSI has already crossed back above the neckline of a complex H&S top, but the MACD remains within a bearish cross.

Oil slumped on Friday, for a second day, after US consumer sentiment missed estimates. 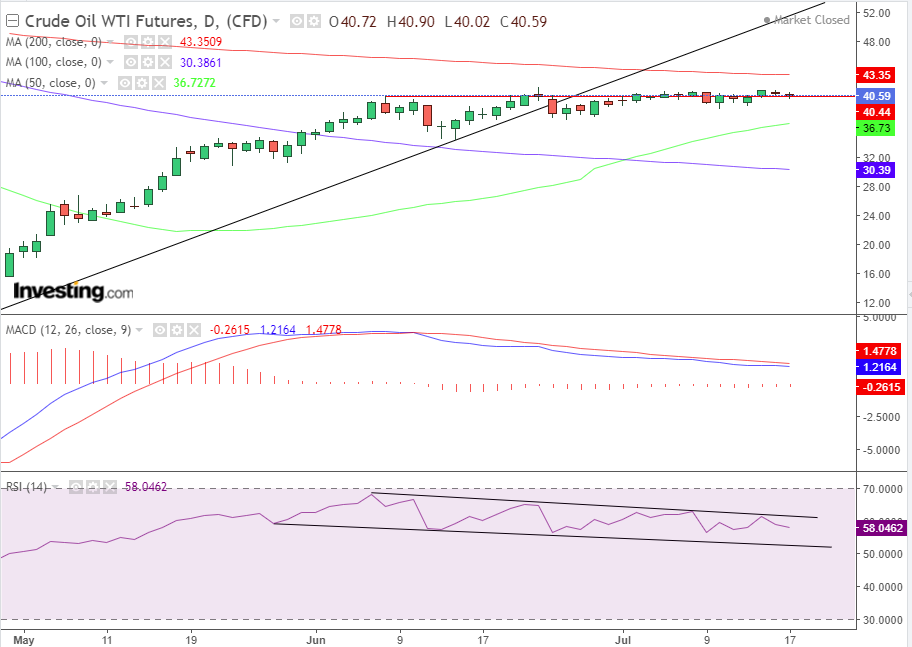 Technically, crude has been flat since June 8. The commodity has been trading horizontally since it fell on June 24, below the uptrend line since April 28. The 200 DMA looms above and the MACD and RSI remain bearish.