US futures, including the Dow, S&P 500, NASDAQ and Russell 2000, climbed on Monday with global stocks, boosted by optimism that there will be a successful vaccine for COVID-19 before the year is out. However, disappointing Chinese economic data has offset some of the gains.

In Europe, the Stoxx 600 index gained with the insurance and banking sector, while energy and healthcare underperformed.

Stocks in Asia climbed back to a two-and-a-half year high, the MSCI All Country Asia Pacific ex Japan added 0.22%, gaining for its second trading day in a row. However, it was held back by Chinese GDP data—after recent positive economic news, the world's largest economy reported GDP below expectations.

All in all, the benchmark is up for eight of the last ten trading days, a rally spurred by ongoing optimism about a potential virus vaccine and the expectation that US Democrats will gain control of all three houses: the White House, Congress and the Senate – forming a “blue wave in the Nov. 3 elections. The potential of a single party government, which would be able to function effectively, increases certainty and therefore investor confidence.

Bears have two main concerns. Persistently rising COVID cases means there is a threat of further restrictions which will choke economies, and stalemate in negotiations in the US.

These fears took control of the market on Monday, when the S&P 500 index traded just one percent from its Sept. 2 record. The market sold off for four straight days, its longest losing streak since March when the benchmark fell in the fastest bear market in history.

Meanwhile, bulls focused on encouraging US economic data which signaled some resilience to the economic recovery. Retail sales provided a bright spot, while jobless claims were higher than expected and job growth showed signs of weakening. Consumer spending is extremely important for a developed economy, as it accounts for approximately two thirds of its GDP. 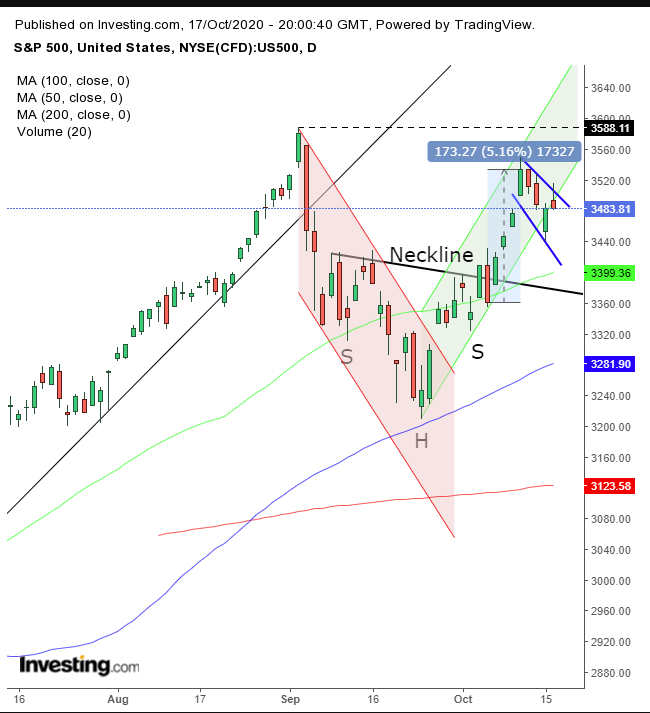 The benchmark developed a falling flag. Intuitively, it can appear as a bearish pattern because it falls. However, it is the formation of a bullish structure, and here’s why:

In other words, there are new bulls picking up the stocks that the early bulls are selling off. Once the early bulls finish selling off their stocks, the supply would suddenly disappear and only demand would remain, making the stocks jump. Of course, this is not a prophecy, but the dynamics of a falling flag.

If there will be an upside breakout it will signal that all available supply has dried up and buyers are forced to raise their bids to find new willing sellers, pushing prices higher.

The flag is considered the midpoint of a move. The first was the upside breakout of a H&S bottom—when a downtrend (red) turns into an uptrend (green). If the flag follows through, the second move would be taking on the all-time high, registered on Sept. 2 (dotted line).

Yields rose for the fourth straight day, as investors dump bonds in favor of risk assets. The Treasury selloff pushed the dollar down for the second session in a row. 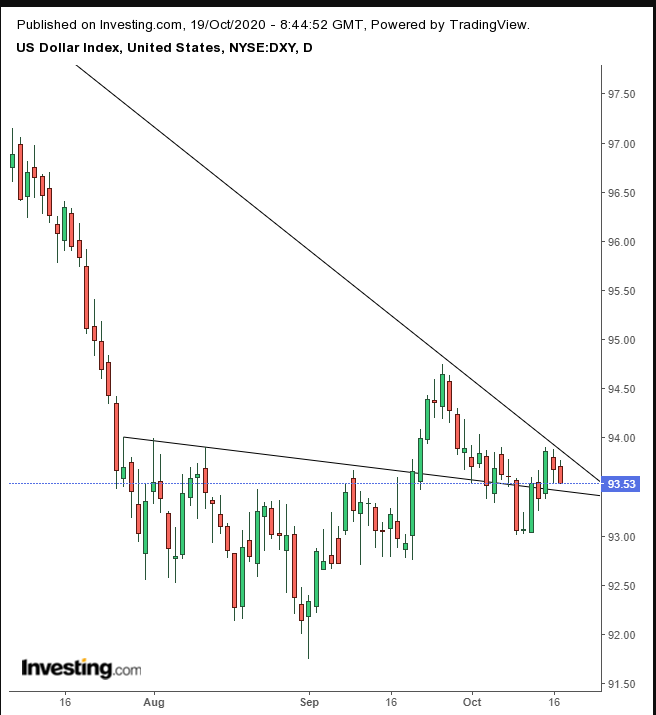 The dollar bulls and bears struggle to dominate their trends. The bottom and its neckline represent demand, while the downtrend line since the March high manifests supply.

Gold advanced to a weekly high on dollar weakness. 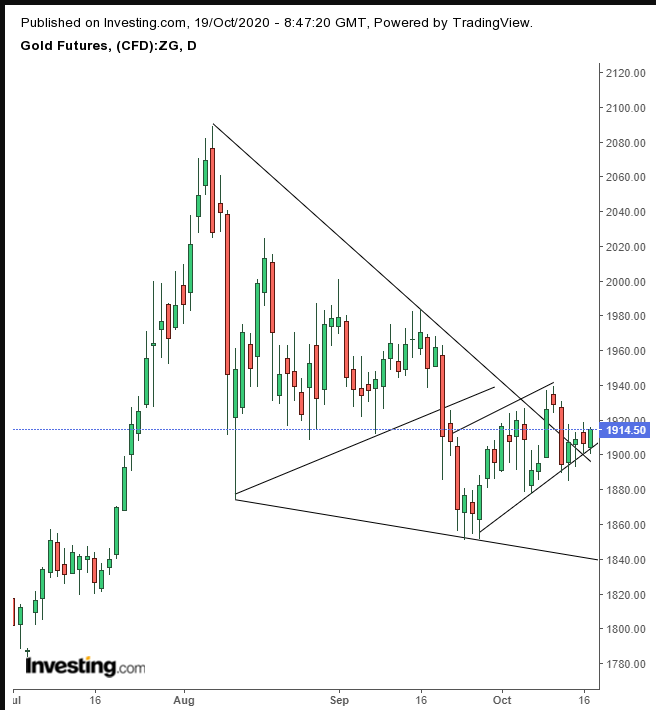 Supply and demand remain at an impasse, as the price struggles between its rising flag, bearish after the symmetrical triangle and the larger, falling wedge, bullish after the 15% surge that preceded it.

Bitcoin declined but within a bullish pattern. 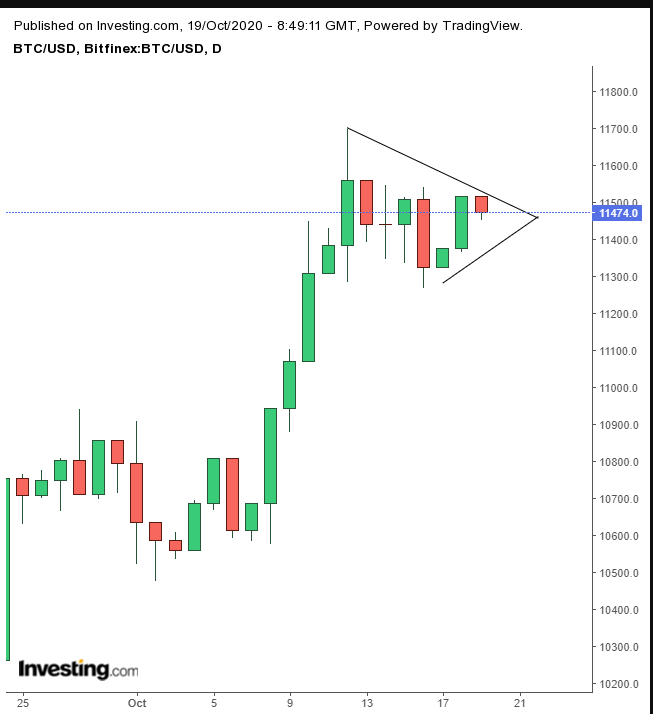 The price of bitcoin is at equilibrium for the seventh session, as new bulls pick up the digital currency from earlier bulls who enjoyed a hike of up to 10%. 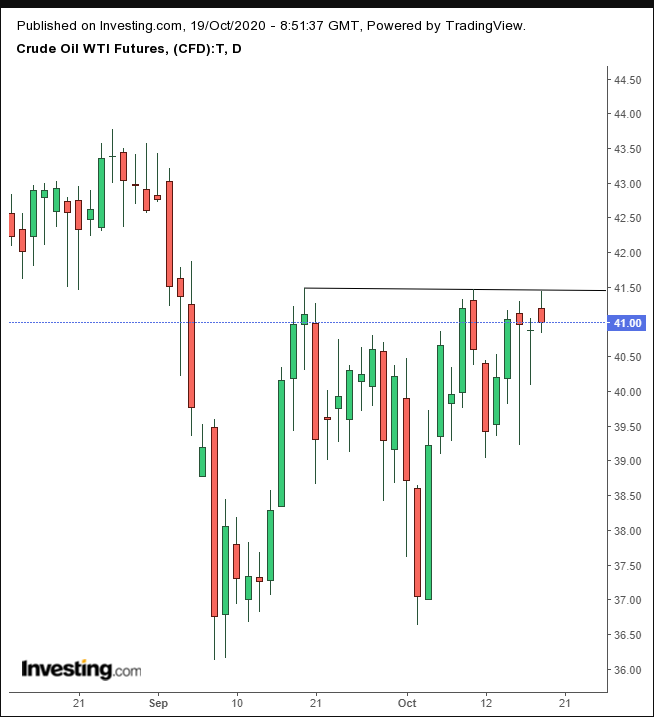 Technically, oil pared gains from the $41.50 level, where it has been rejected since Sept.18, two whole months.

All times are EDT