The focus is on the US, where the presidential campaigns of Hillary Clinton and Donald Trump come to an end, as the 45th President of the United States is elected. Although the outcome of the election is likely to dominate the markets, analysts will also be viewing some key economic data releases. Industrial production numbers are released across Europe and will provide information on latest industry trends, while retail sales numbers in the eurozone will give insight into how consumers are faring.

The outcome of the US presidential election has the potential to move markets around the world, and any disruption could thwart the Fed’s growing appetite to raise interest rates further at its December meeting. Consumer sentiment and mortgage data are also likely to add to the policy debate. The University of Michigan Index fell to its lowest level in over a year in October, with some of the weakness linked to uncertainty around the upcoming presidential election. 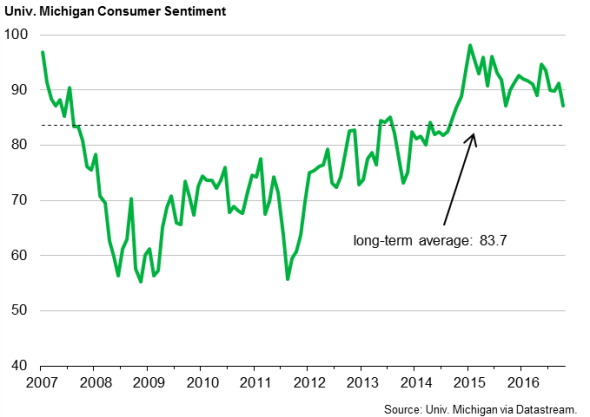 After the Bank of England left monetary policy unchanged and raised its UK economic growth forecast for 2016 to 2.2% (previously 2.0%) and for 2017 to 1.4% (previously 0.8%), eyes will now turn to the Office for National Statistics, which publishes construction, industrial output and trade data during the week. The releases will add important information to third quarter economic growth, after the preliminary estimate (which includes only roughly half of the final data) signalled GDP growth of 0.5%, and the economy’s trajectory heading into the fourth quarter.

According to the ONS’s first estimate, industrial production declined 0.4% over the third quarter as a whole, dragged down by a 1.0% relapse in manufacturing output, but the manufacturing PMI data signal a marked rebound in production volumes.

UK construction output data are also out and business survey results point to a recovery of the sector in September.

Meanwhile, the weak pound should be a boon to exporters, as it makes UK produced goods and services cheaper elsewhere. Trade data, released by the ONS on Wednesday, will show the extent to which exporters were benefitting in September.

UK manufacturing production and the PMI 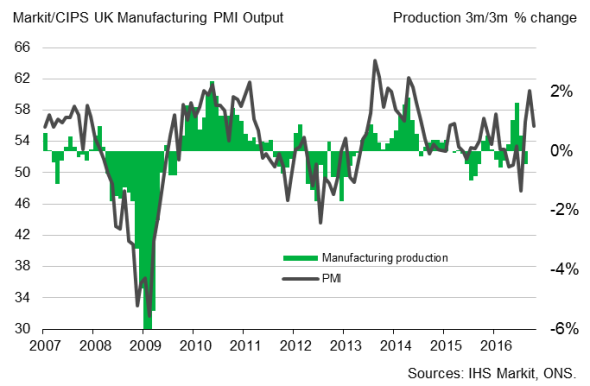 Industrial production numbers are meanwhile released in a number of euro area countries, including Germany, France and Italy. In August, industrial output in the currency union as a whole rose 1.6% and was supported by solid expansions in the region’s largest member states. The latest IHS Markit prediction sees industrial production in the euro area having grown 1.1% in September.

China data watchers will keep a close eye on inflation and trade data for more information on the health of Asia’s largest economy. In September, consumer prices rose 1.9% and producer prices increased for the first time since 2012, thereby relieving a source of global deflationary pressure. Latest manufacturing PMI data from Caixin highlighted the strongest rise in factory gate prices since early-2011, thereby supporting the view that producer prices should continue to rise.

The latest AIG Construction Index is released in Australia.

Eurostat issues retail sales numbers in the currency union. Moreover, the Eurozone Sentix Index and the latest Retail PMI are out.

Germany sees the publication of factory orders data, while industrial output figures are issued in Spain.

Halifax house price data are updated in the UK.

The US presidential election takes place.

Trade data are out in China.

In Germany, industrial production and trade figures are updated by Destatis.

Current account and trade balance numbers are released alongside latest results from the INSEE Investment survey.

In the UK, the British Retail Consortium issues retail sales data, while the Office for National Statistics publishes industrial output figures. Moreover, the latest UK & English Regions Report on Jobs is out.

Consumer credit figures and the latest NFIB Business Optimism Index are published in the US.

Current account and bank lending data are published in Japan.

In India, M3 money supply numbers are issued, while inflation figures are out in China.

Trade data are meanwhile issued in the UK.

Mortgage data are released in the US.

Machinery orders figures are out in Japan.

Trade data are issued in India.

Industrial production are updated in Italy and France, with the latter also seeing the release of third quarter non-farm payroll figures.

In Greece, inflation and unemployment data are issued.

Initial jobless claims figures are out in the US.

The Reuters Tankan Index is released in Japan.

The Office for National Statistics releases construction output numbers for the UK.

The Reuters/Michigan Consumer Sentiment Index is published in the US.

Disclaimer: The intellectual property rights to these data provided herein are owned by or licensed to Markit Economics Limited. Any unauthorised use, including but not limited to copying, distributing, transmitting or otherwise of any data appearing is not permitted without Markit’s prior consent. Markit shall not have any liability, duty or obligation for or relating to the content or information (“data”) contained herein, any errors, inaccuracies, omissions or delays in the data, or for any actions taken in reliance thereon. In no event shall Markit be liable for any special, incidental, or consequential damages, arising out of the use of the data. Purchasing Managers' Index™ and PMI™ are either registered trademarks of Markit Economics Limited or licensed to Markit Economics Limited. Markit is a registered trade mark of Markit Group Limited.