Week Ahead: Bank Earnings to Battle with COVID-19 for Traders’ Attention

Week Ahead: Bank Earnings to Battle with COVID-19 for Traders’ Attention

There are no two ways about it: The week after the US had its annual Independence Day celebration was an ugly one for the country’s fight against COVID-19. The world’s largest economy reported record-high infection figures in excess of 60,000 new cases on multiple days, and most alarmingly, saw the infection death rate start to tick higher. In recent weeks, optimists had argued that improvements in treatment and a younger cohort of cases would limit the ultimate human toll of this “second wave” (extended first wave?), those hopeful views are now being thrown in doubt.

On the economic front, it was a relatively quiet week. Stateside, Monday’s ISM Non-Manufacturing PMI, which represents one of most timely on-the-ground measures of economic activity, surprised to the upside, printing at 57.1, a massive improvement over last month’s 45.4 reading and well above consensus estimates of a 50.0 reading. Indeed, this figure (if not subsequently revised lower), represents the second strongest reading in the past year for the service sector. Separately, Producer Prices (PPI) came in soft, showing that there’s little reason to expect inflation hitting US consumers any time soon.

Outside the US, the picture was more mixed. Canada’s highly-anticipated employment report showed a better-than-expected job growth reading of nearly +1M, though the unemployment rate did come in a couple ticks higher than expected at 12.3%. Finally, the RBA left interest rates unchanged at 0.25% as widely expected as the country deals with its first recession in a generation.

In terms of price action, global equity indices mostly held steady (with the notable exception of the NASDAQ – see “Chart of the Week” below), while the US dollar and global bond yields edged lower. Perhaps the biggest move took place in gold, which rallied to break above $1800 for the first time since 2011 on expectations of continued monetary and fiscal stimulus measures. The established trend and sentiment continue to point to further gains in the yellow metal, so traders may look to buy any short-term dips in the coming days.

Turning our attention to the coming week, coronavirus will once again steal most of the headlines. That said, the virus will compete for traders’ attention with the true start of Q2 earnings season, with the five largest banks by AUM all reporting through the middle of the week. Though the yield curve did steepen slightly relative to Q1, big banks’ net interest margins likely remained low throughout the quarter, so the market’s focus will be on trading profits and balance sheets; the banks that capitalized on the rebound in broader markets and fortified their balance sheets (Goldman?) are likely to outperform more consumer-oriented institutions (Wells Fargo?).

In addition to the latest COVID-19 infection/death figures (especially in hard hit states like Arizona, Texas, Florida, and California), traders will also key in on these key economic data releases in the coming week:

As a final event-driven note, readers should also monitor the progress on an extension of the US fiscal stimulus that is set to expire at the end of the month. As Republicans and the White House have downplayed the need for continued support, the market has lost its bullish momentum, so any signs of serious progress on that front could boost appetite for global risk assets across the board.

Chart of the Week: Daily NASDAQ 100 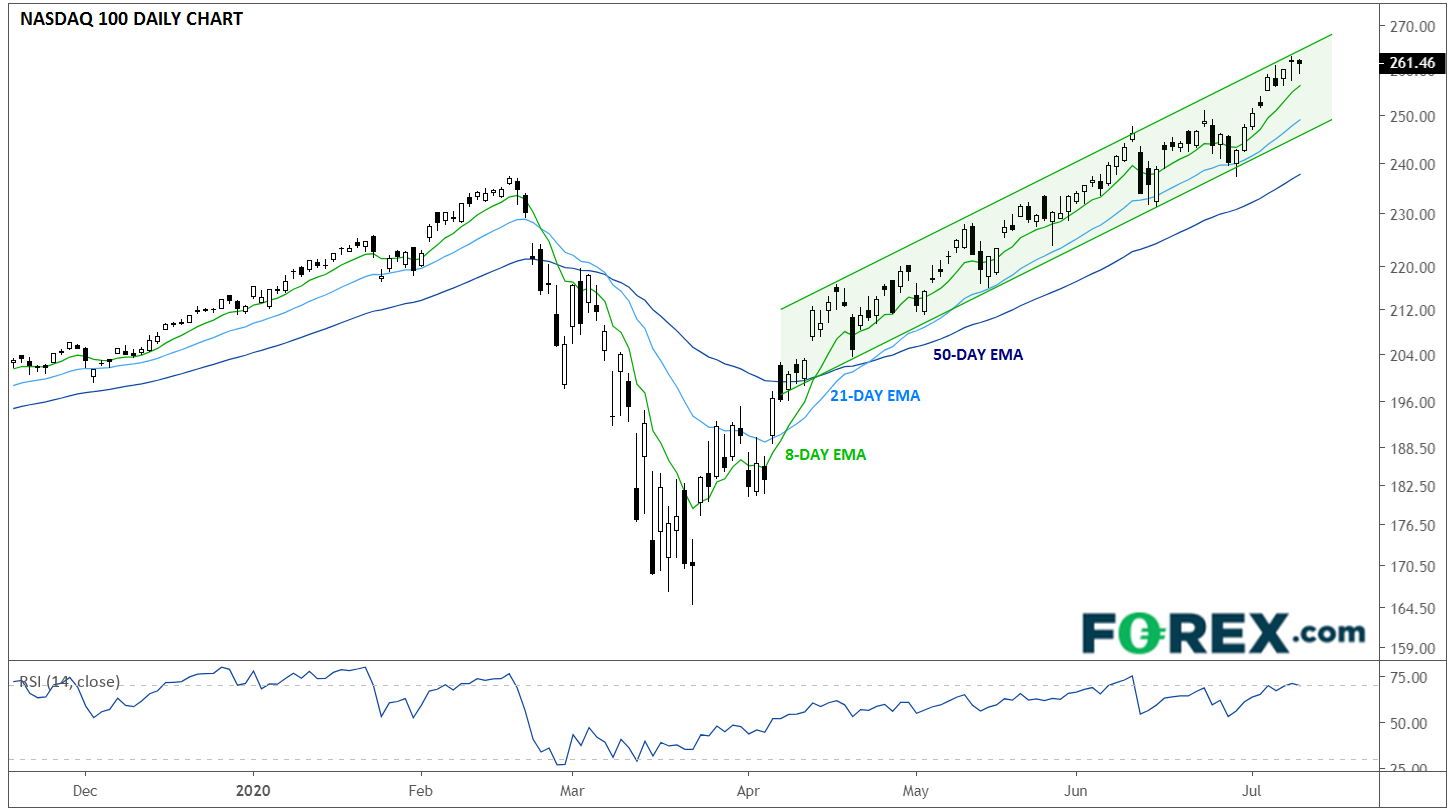