For anyone who’s following Turkish monetary policy (so about 6 of our readers), it’s not surprising that most traders were expecting no change to the Central Bank of the Republic of Turkey’s (CBRT) key interest rate given the close ties between the central bank and the government. After all Turkey’s President Erdogan outright said last year that he “fired the previous central bank governor because he wouldn’t listen and we have decided to move on with our new friend [current CBRT governor Murat Uysal],” whom he told “we are going to lower interest rates.”

Against that backdrop, it’s truly shocking that the CBRT decided this morning to raise its primary interest rate a full 200bps from 8.25% to 10.25%. In its statement, the central bank said a rate rise was needed to contain inflation, which stood at 11.7 per cent in July – more than double the bank’s 5 per cent target. While the move is clearly justified based on monetary policy and a need to avoid a balance of payments crisis (and the lira accordingly recovered off its record lows), some analysts have suggested that the abrupt change in policy shows that the situation may be more dire than feared; in other words, the CBRT’s surprise rate hike could indicate a panic, last-ditch effort to avoid a full-blown currency crisis.

Turning our attention to the chart, USD/TRY remains a clear uptrend despite today’s dip, with rates still trading higher on the week and up nearly 20,000 pips (!) from the January lows. The short- and medium-term exponential moving averages (8-day, 21-day, and 50-day) are all trending higher, signaling a healthy uptrend that may be more likely to continue. Meanwhile, though the RSI indicator is within “overbought” territory, it’s not showing a meanginful bearish divergence yet; in other words, the new highs in the exchange rate itself are being confirmed by new highs in momentum as well, so there could still be room for rates to extend their uptrend from here: 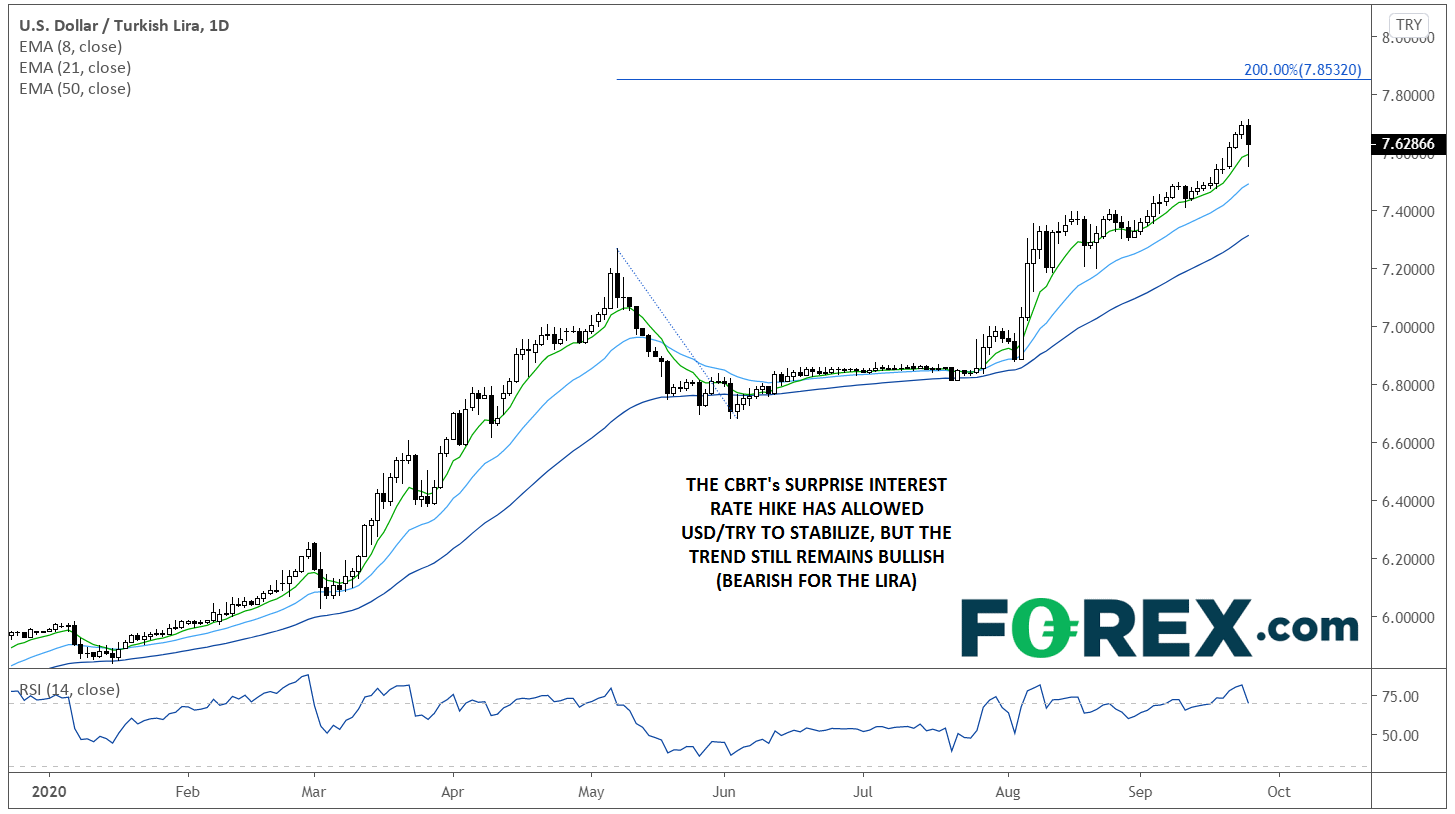 With USD/TRY already testing record highs (record lows in the lira), there are no levels of previous resistance to watch. One method that traders can use to project potential resistance levels in these types of scenarios is to look at “Fibonacci extensions.” The pair has already exceeded the 127.2% and 161.8% extensions of the Q2 pullback, so if bulls are able to shrug off today’s CBRT decision, USD/TRY may look to target the 200% retracement at 7.85 or the psychologically-significant 8.00 level next.