After so many weeks of “will they, won’t they?”, markets have taken one word “optimistic” from Democrat House Speaker Nancy Pelosi and run with it. We are risk-on once more. US Treasury yields are breaking higher, with the 10 year yield above 0.80% for the first time since June, whilst this is also accompanied by a “bear steepener” on the yield curve (which is bullish for risk). We have been here before though, and this move is clearly open to potential disappointment. Markets are taking fiscal stimulus as not “if”, but “when” and as just a matter of time now. The US dollar is coming under growing negative pressure, with the Dollar Index falling below 93.0 for the first time in a month. A move below 92.70 would now open a retest of the 91.75 September low (which would equate to EUR/USD testing 1.2010 once more). Equity markets have been fluctuating in recent sessions, with repeated bull failure moves, however, once more we see futures ticking higher. Can the move hold this time? Away from the US, we had UK inflation rebounding all but in line with expectations today, with the core at +1.3% year on year and headline at +0.5%. A tenth of a percent miss on the consensus headline has not been enough to weigh sterling down today.

Wall Street closed with gains well off the session highs, with the S&P 500 +0.5% at 3443. However, with futures rebounding again today (E-mini S&Ps +0.6%) the bulls are having another go today. Asian markets have been mixed to slightly positive, with the Nikkei +0.3% and Shanghai Composite -0.3%. In Europe, the rise in US futures is helping FTSE futures +0.2% and DAX futures +0.3%. In forex, we see USD as the main casualty today, with a risk positive bias. AUD and NZD are rebounding after recent weakness and are outperforming. In commodities, the dollar weakness is pulling gold +0.6% higher and silver +1.7% higher. Oil has slipped back around half a percent and is again unable to sustain traction.

It is another rather light economic calendar today. Canadian inflation is at 1330BST which is expected to see year on year headline inflation increasing to +0.4% in September (from +0.1% in August). The EIA Crude Oil Inventories are at 1530BST and are expected to show a small drawdown of -0.2m barrels (after a +2.9m barrels build last week). We are also on the lookout for the Fed’s Beige Book which is released at 1900BST.

There are a number of central bank speakers listed today to keep an eye out for. ECB President Christine Lagarde speaks at 0830BST whilst the ECB’s Chief Economist Philip Lane speaks at 0845BST. For the Fed speakers we have the FOMC’s Lael Brainard (voter, leans dovish) at 1350BST and the FOMC’s Loretta Mester (voter, leans hawkish) at 1500BST.

Chart of the Day – USD/CAD

The dollar seems to be coming under mounting pressure once more. There have been some fluctuations in the outlook on USD/CAD, but there is a net impact of lower highs and lower lows in recent weeks. With yesterday’s decisive negative candle, a three week downtrend has continued. This comes after last week’s technical rally once more faltered at an increasingly important pivot band of recent months around 1.3240. Momentum indicators are renewing their negative configuration, but also with downside potential too. The next key move will be a closing breakdown below 1.3095 which would re-open the 1.2990 key September low. The market is already eyeing this move early today and has made an intraday break. It just needs to be confirmed with a strong bear candle now. We look to use any intraday rebound as a chance to sell now, with the three week downtrend coming in at 1.3200. The hourly chart reflects the sell into strength strategy, with near term resistance between 1.3130/1.3150. It would need a move above 1.3200 to improve the outlook, with a move above 1.3260 needed to confirm a change of outlook. 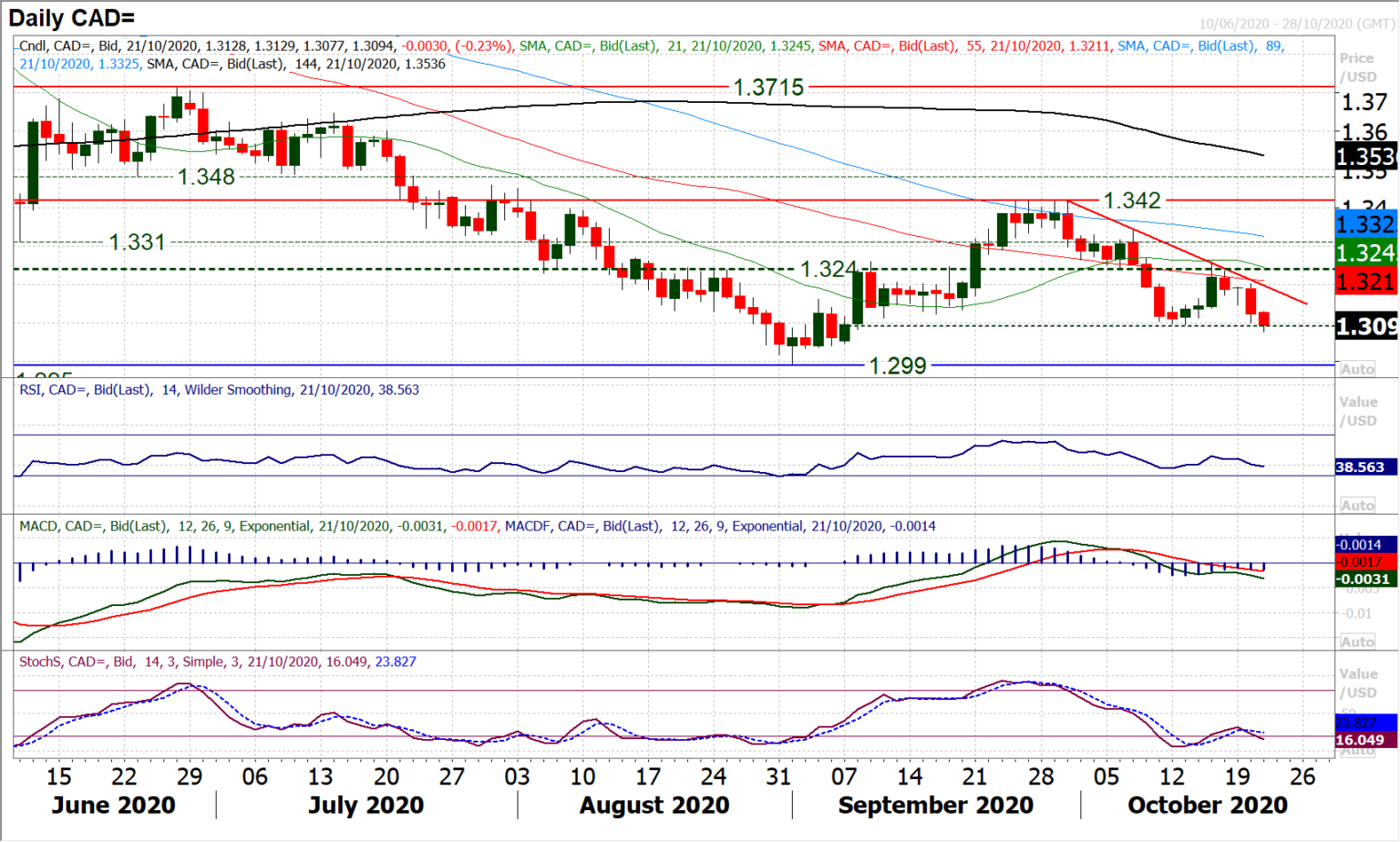 After a few weeks of aimless fluctuation, the pair is starting to find some direction as the dollar comes under growing selling pressure. EUR/USD has moved higher though initial resistance at 1.1830 which opens the resistance levels towards the highs of the three month consolidation range. There is an improvement in momentum, however, this needs to be confirmed with daily RSI holding into the 60s and MACD lines rising above zero. This would then point towards the pair holding around the upper half of the 1.1610/1.2010 medium term range. Above 1.1870 the more important resistance at 1.1900/1.1915 is open. The hourly chart shows 1.1815 initial support this morning, and then 1.1760/1.1795. If this breakout above 1.1830 holds on a closing basis, then we would look to buy into intraday weakness. 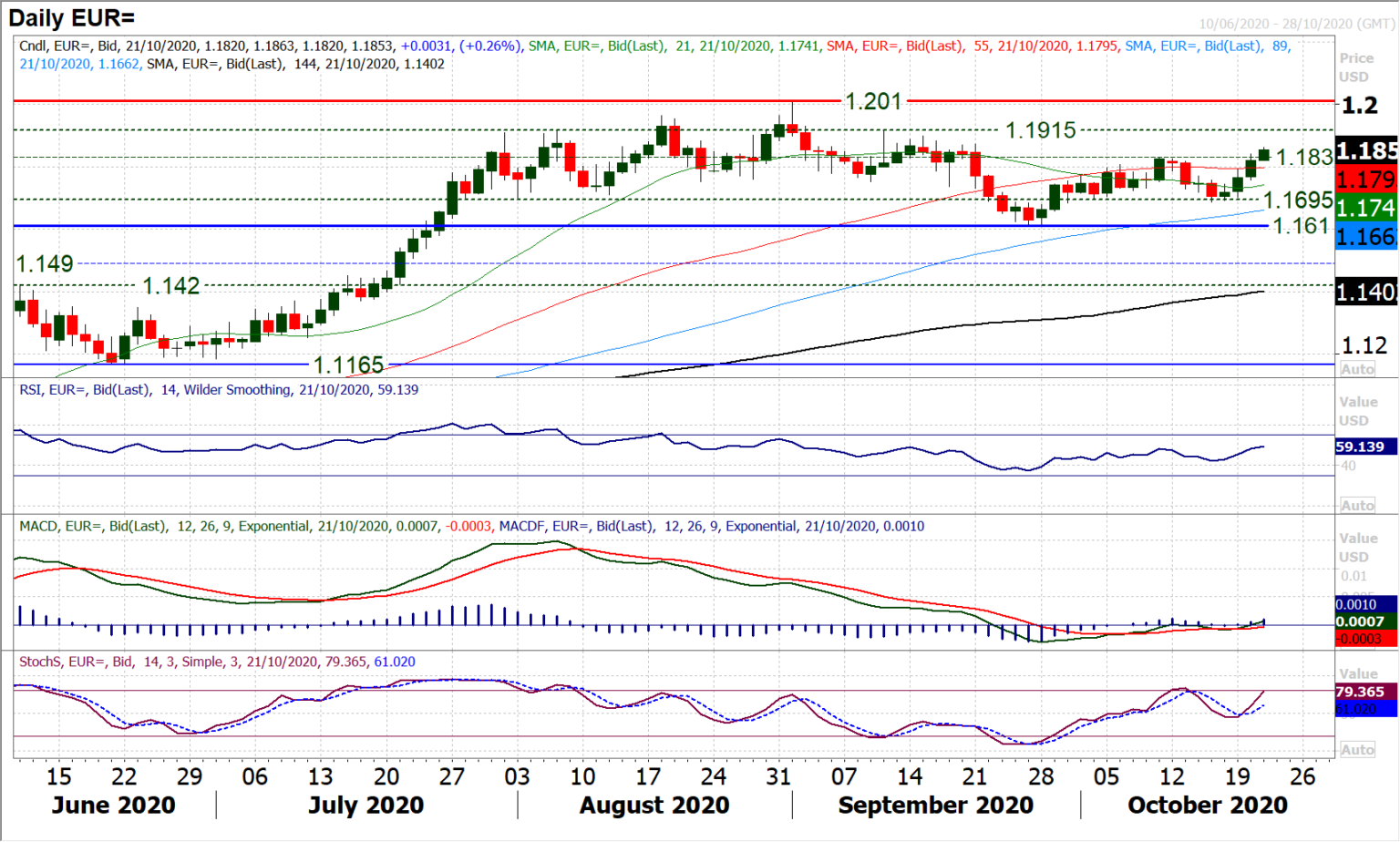 The dollar is growing under pressure across major forex. For Cable, this move has so far been less decisive, as there is the added uncertainty of sterling and the reaction to the Brexit trade deal negotiations. However, there is a move which is building pressure back towards 1.3000 once more. The resistance of the past six weeks has consistently been around 1.3000/1.3080 and it will be interesting to see whether the bulls take a view and are able to pull Cable up through this barrier. Momentum indicators are ticking higher in improvement, but have more to confirm a bullish breakout is on the way. For now, we still sit with an uncertain neutral outlook, however, there is a positive bias to Cable which is developing once more. The support at 1.2845 is strengthening and initially support is at 1.2910 this morning (from yesterday’s low). A move above 1.3025 would be a sign of positive intent. 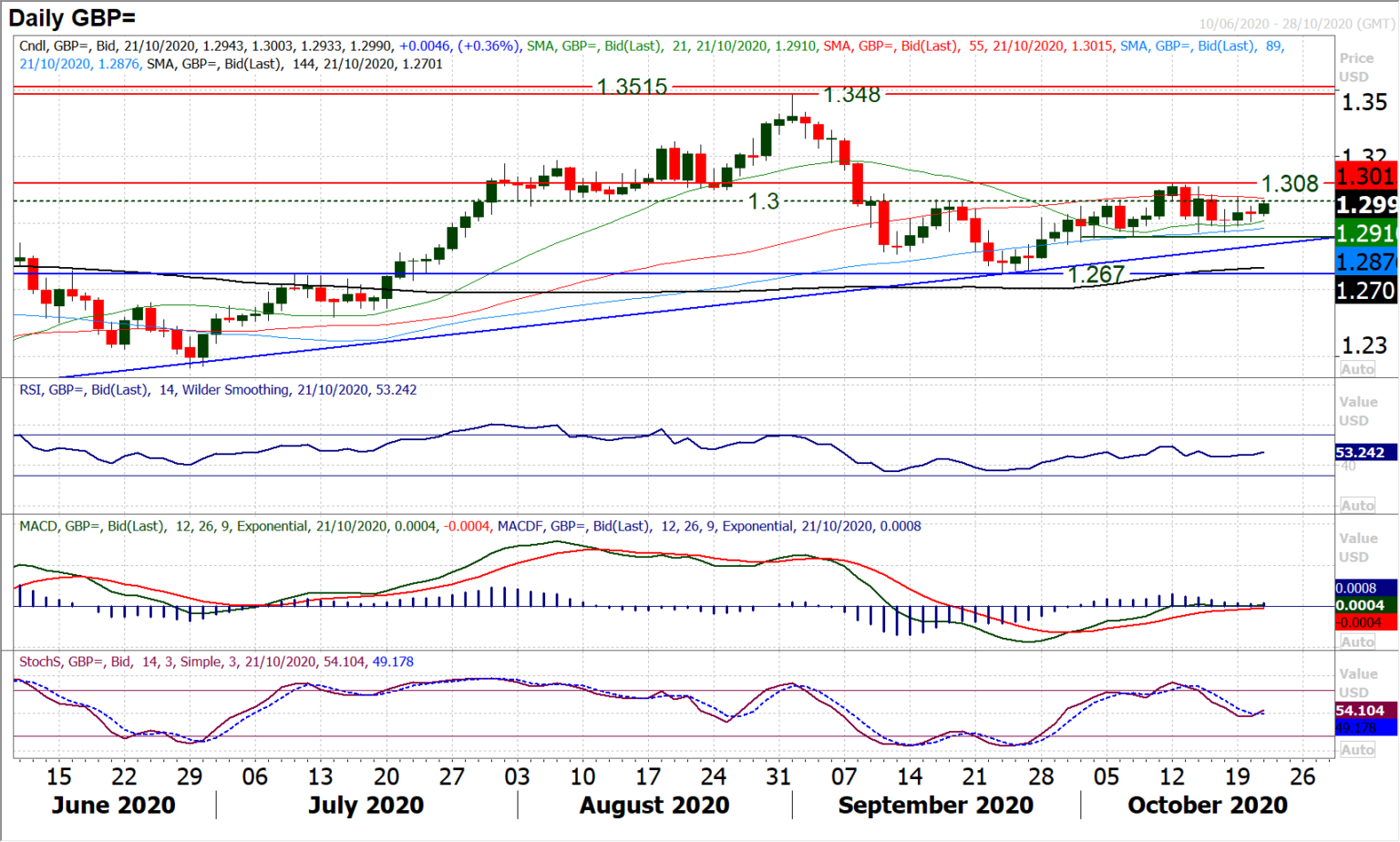 We continue to see near term rallies on Dollar/Yen within the near four month downtrend as a chance to sell. The trendline falls at 105.84 today. Yesterday’s intraday failure at 105.75 and continued downside today simply adds to the sense that the pair is moving towards a test of 104.90. It comes with the struggling momentum improvement also now falling over and we look to use intraday strength as a chance to sell. The hourly chart shows initial resistance 105.40/105.60 is a near term sell zone now. 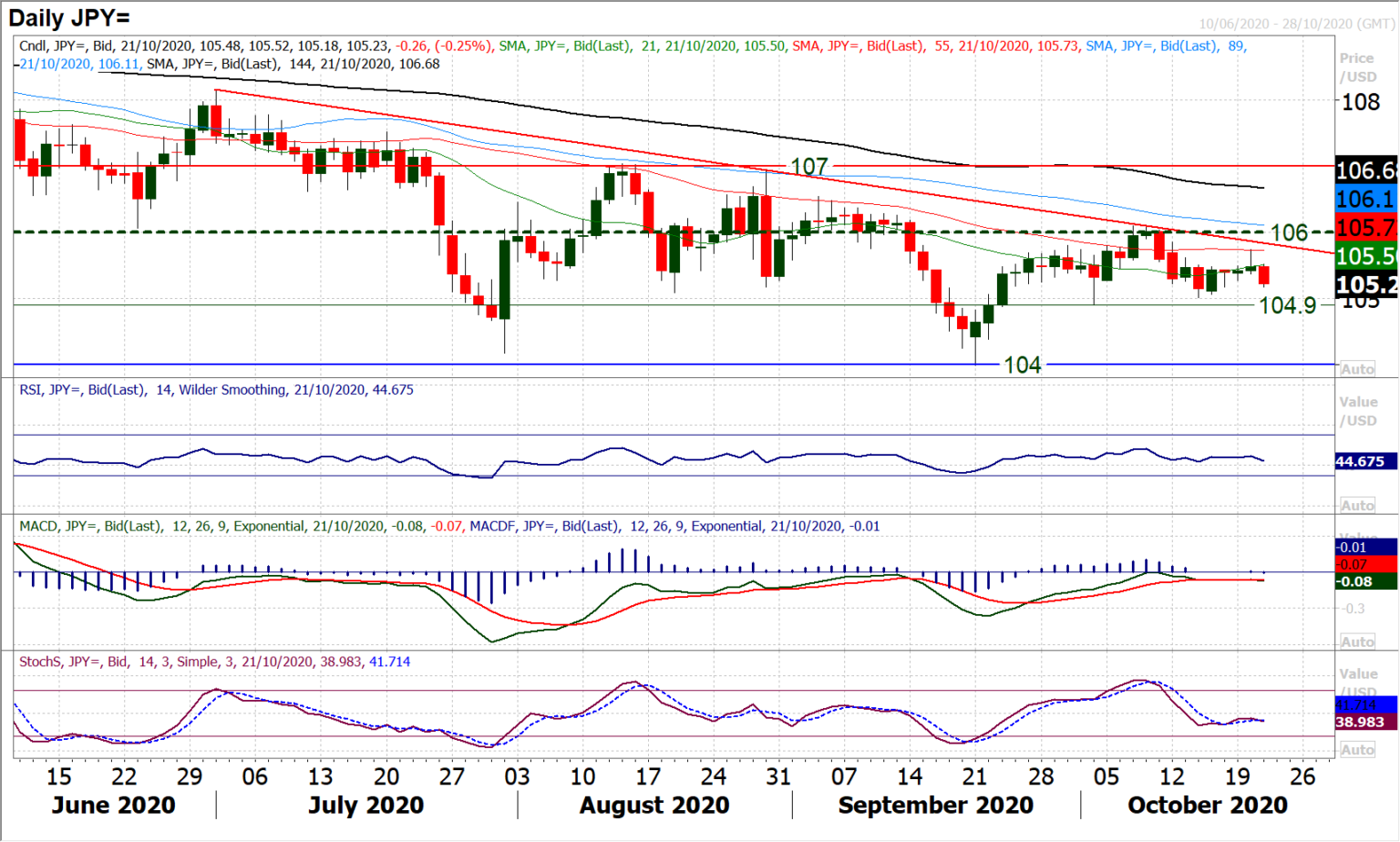 After several days lacking conviction, are the bulls starting to make their move again? The past four completed sessions have seen a mild creep higher, but the small candlestick bodies reflect a lack of real intent. However, this morning, we see the market pushing the buying pressure and this pressure is testing the key two month downtrend (today at $1920). There are three key near to medium term technical barriers immediately overhead now. Initially the two month downtrend at $1920, then the 23.6% Fibonacci retracement (of $1451/$2072) at $1926 and then the $1933 October high. If these can be overcome then the bulls will be in a strengthening position to test much higher at $1973 and $1991. Momentum is still a little sluggish, with RSI rising but still under 55 (around where the lower highs have all been posted since August). A move into the high 50s would suggest real positive momentum could be forming. The hourly chart shows a gradually more positive configuration is forming. The bulls will be looking to use $1910/$1914 as near term support to buy into intraday weakness now. A higher low comes in at $1894. Signs of life once more, but this move still has plenty of hurdles to overcome before we can buy with confidence again. 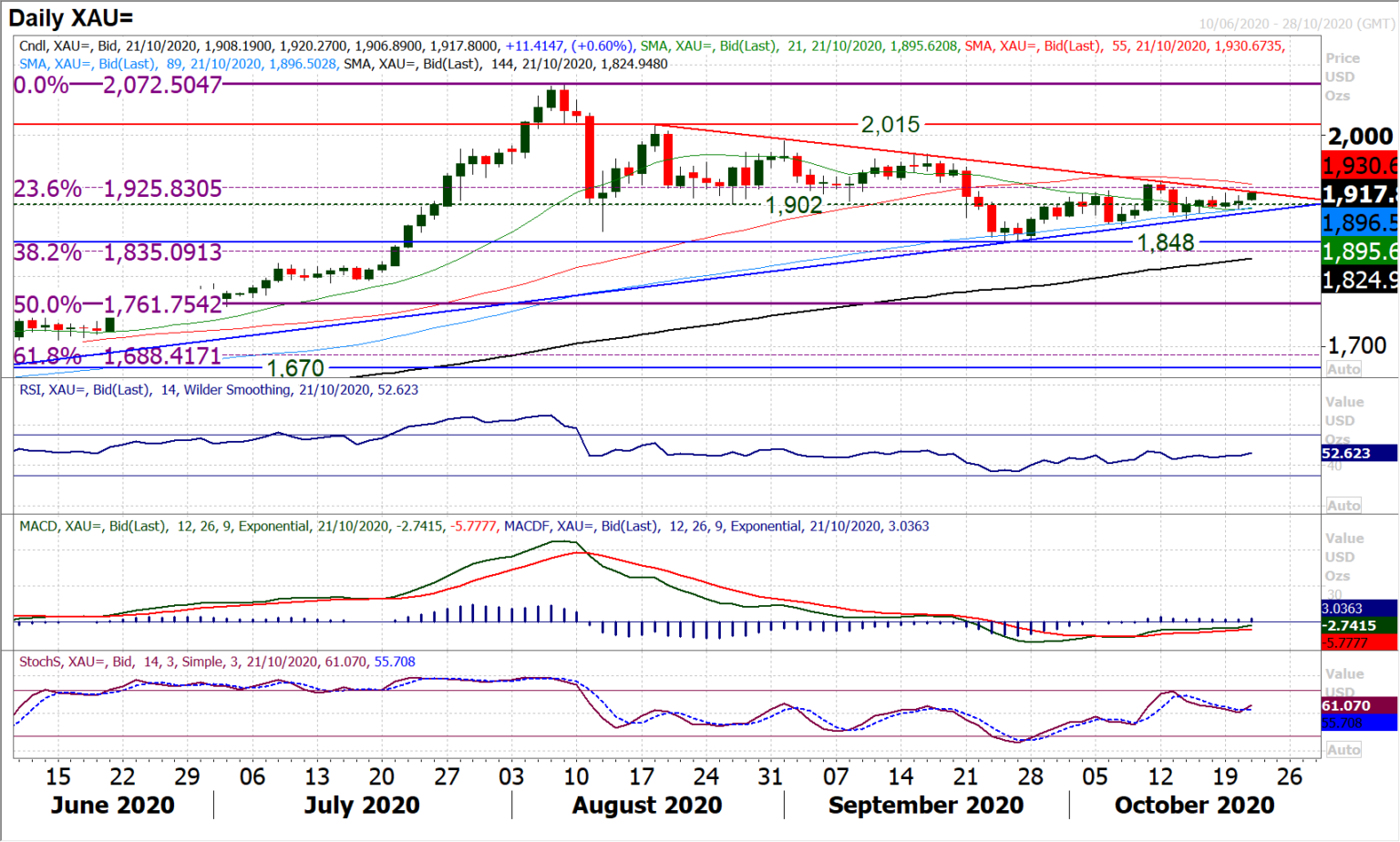 Brent Crude remains in consolidation mode over the medium term. In the past six weeks, the price has fluctuated consistently between $38.80/$43.80. More recently, in the past two weeks, the price has consolidated in an even tighter range between a pivot at $41.30 and resistance at $43.55. This has come with moving averages all converging and flattening off (in neutral fashion), whilst momentum indicators (RSI and MACD especially) have flattened around their neutral points. After a few sessions of mild negative drift, Brent countered this yesterday with a rebound back higher again, to once more negate any sense of direction. This has been confirmed today as the market has opened back lower once more. Another decisive positive candle today would though begin to hint at a potential upside break. Resistance at $43.55/$43.80 is key. Initial support at $42.20 which now helps to protect $41.30. If fiscal stimulus is agreed in the US, then this could produce the fuel that the bulls need for a renewed rally. 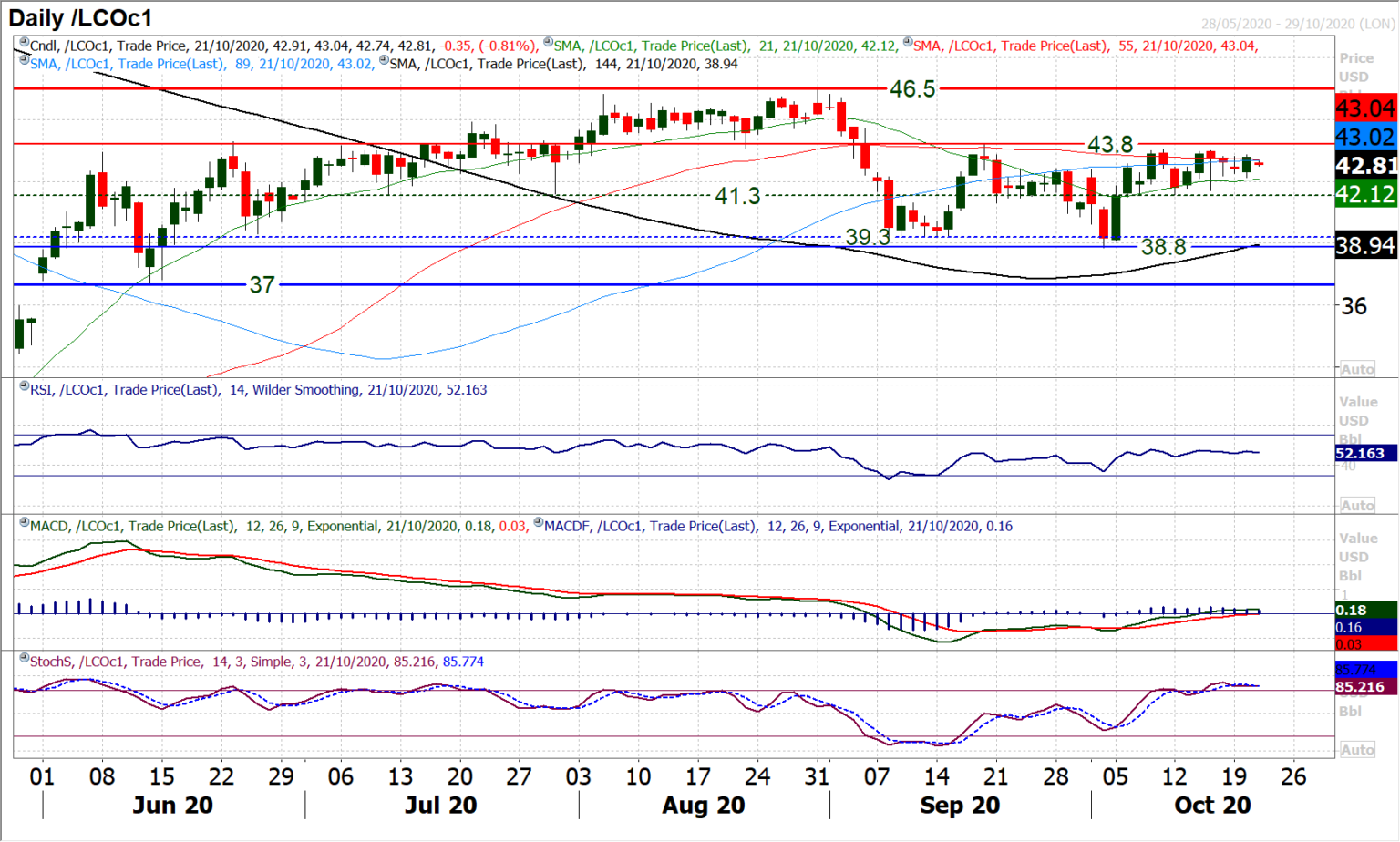 There is a very uncertain feel to moves on Wall Street right now. The Dow has pulled back into the support band of 28,040/28,365 to build support. However, in doing so, the support is rather tentative. Yesterday’s positive close added +1.4% but the daily candlestick shows a loss of -1% back from earlier session highs to leave a highly questionable positive candlestick (and very similar to Friday’s candle which came before a strong negative session). Futures are ticking higher once more today and this buying needs to hold for at least a close above 28,365 again otherwise the bulls may suffer another sell into strength session. Support at 28,140 (Monday’s low) will be important, but a close under 28,040 is becoming increasingly important as it would open much deeper downside targets. Resistance is at yesterday’s high of 28,575, whilst the bulls have failed at successive lower highs in the past two sessions under Friday’s high of 28,843. 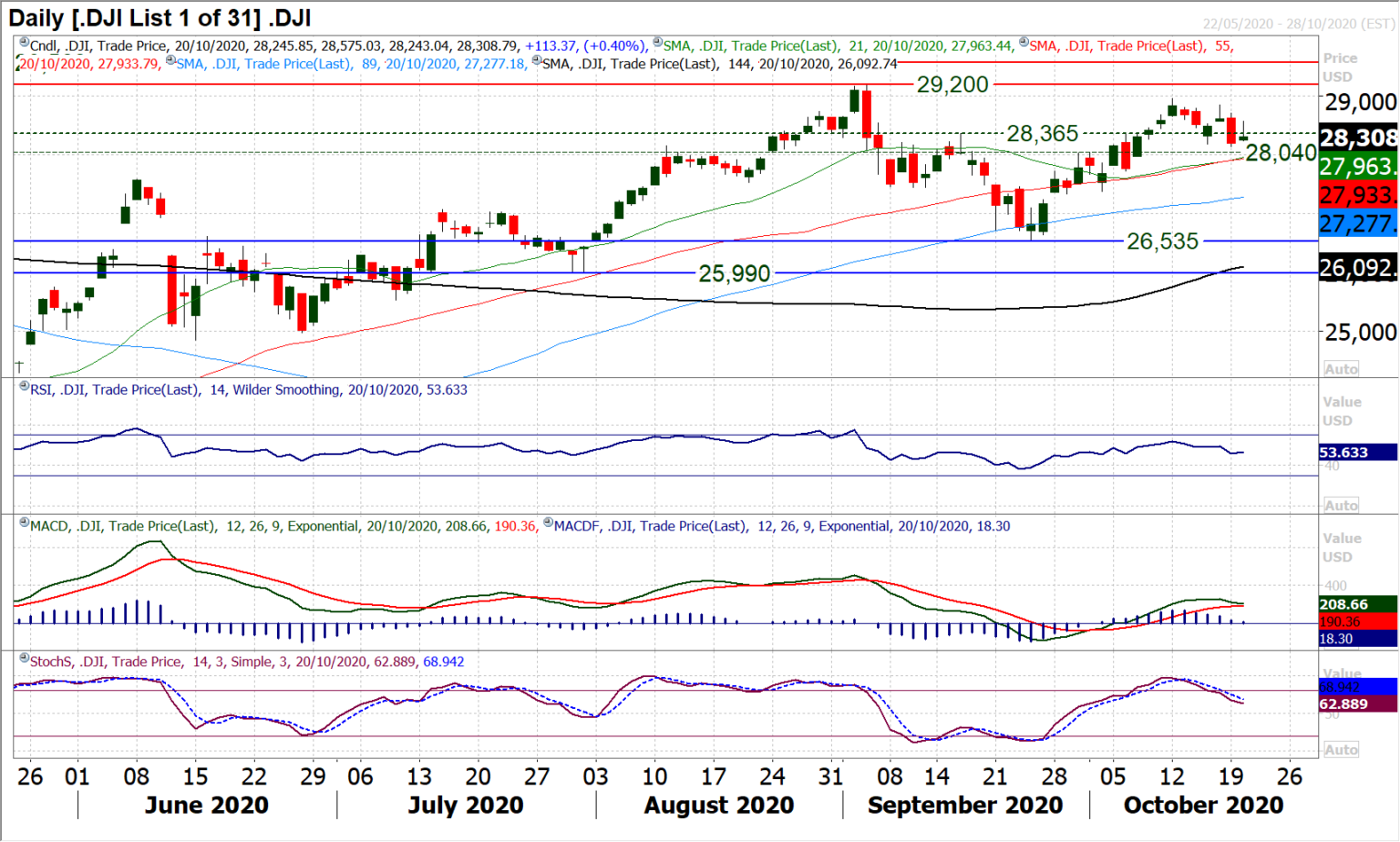