A recovery on the US dollar is gathering momentum. With traders increasingly concerned about second wave COVID infection rates rising across Europe and trends also turning higher for the US, there is a shift into the dollar. Throughout the summer months the perception was that the US was in for economic underperformance. However, this perception is now being re-set as France, Spain and increasingly the UK are struggling with rising infection rates which are forcing the reinstatement of social containment measures. Congress may have been able to pass a stopgap funding bill to keep government open, but a fiscal support package remains some way off. Fed chair Powell may have towed the dovish line, but there has also been surprisingly hawkish comments from the FOMC’s Charles Evans over limiting QE and raising rates sooner than expected. The dollar has seen the benefit of all this, driving higher through 94.00 resistance on Dollar Index. This equates to two month lows on EUR/USD whilst gold has also broken decisively below $1900. The Reserve Bank of New Zealand maintained a fairly steady ship on monetary policy (rates at +0.25%, asset purchases steady at NZD 100bn) and kept the door open to negative rates. This has not helped the Kiwi too much though this morning.

Wall Street closed with good recovery gains, with the S&P 500 +1.1% at 3315, whilst US futures are steady this morning (E-mini S&Ps +0.1%). Asian markets were all but flat overnight, with the Nikkei just -0.1% lower after two days of public holiday and the Shanghai Composite basically flat. European markets look set for a decent rebound with FTSE futures +0.9% and DAX futures +0.5%. In forex, we see USD strengthening continuing across the major pairs, with AUD and NZD underperforming, whilst EUR and JPY are only slightly weaker. In commodities, the big declines continue in the precious metals, with silver -5% and gold -1% lower again today. Oil is also around -1% lower.

Once more there will be focus on Fed chair Jerome Powell who testifies before the House Select Committee at 1530BST about impact of COVID-19. Again, any clarity on Fed monetary policy could drive volatility. There are two other Fed speakers today too, with Loretta Mester (tends to lean hawkish) at 1400BST and Randall Quarles (centrist) at 1900BST.

Chart of the Day – AUD/JPY

Aussie/Yen remains a classic signal for risk sentiment. So as risk appetite heads south in the early part of this week we have seen an acceleration lower on AUD/JPY. This move has dragged the cross back to the old June/July pivot at 75.00 again, a level coming under significant scrutiny early today. This seems to be a sharply deteriorating market right now, but a closing breach of 75.00 would effectively open the way towards 72.50 again. The concern for the bulls is that having broken the final (shallowest) uptrend (since mid-June) of the recovery late last week, the market is now building a new downtrend of lower highs and lower lows. The move below 75.55 in the last couple of days confirms the retreat now underway. A three week downtrend is in play, whilst momentum indicators are increasingly correctively configured. It suggests now selling into near term strength, with a band of resistance 75.55/76.10 being a band of overhead supply. On a close below 75.00 the initial support is 74.00. 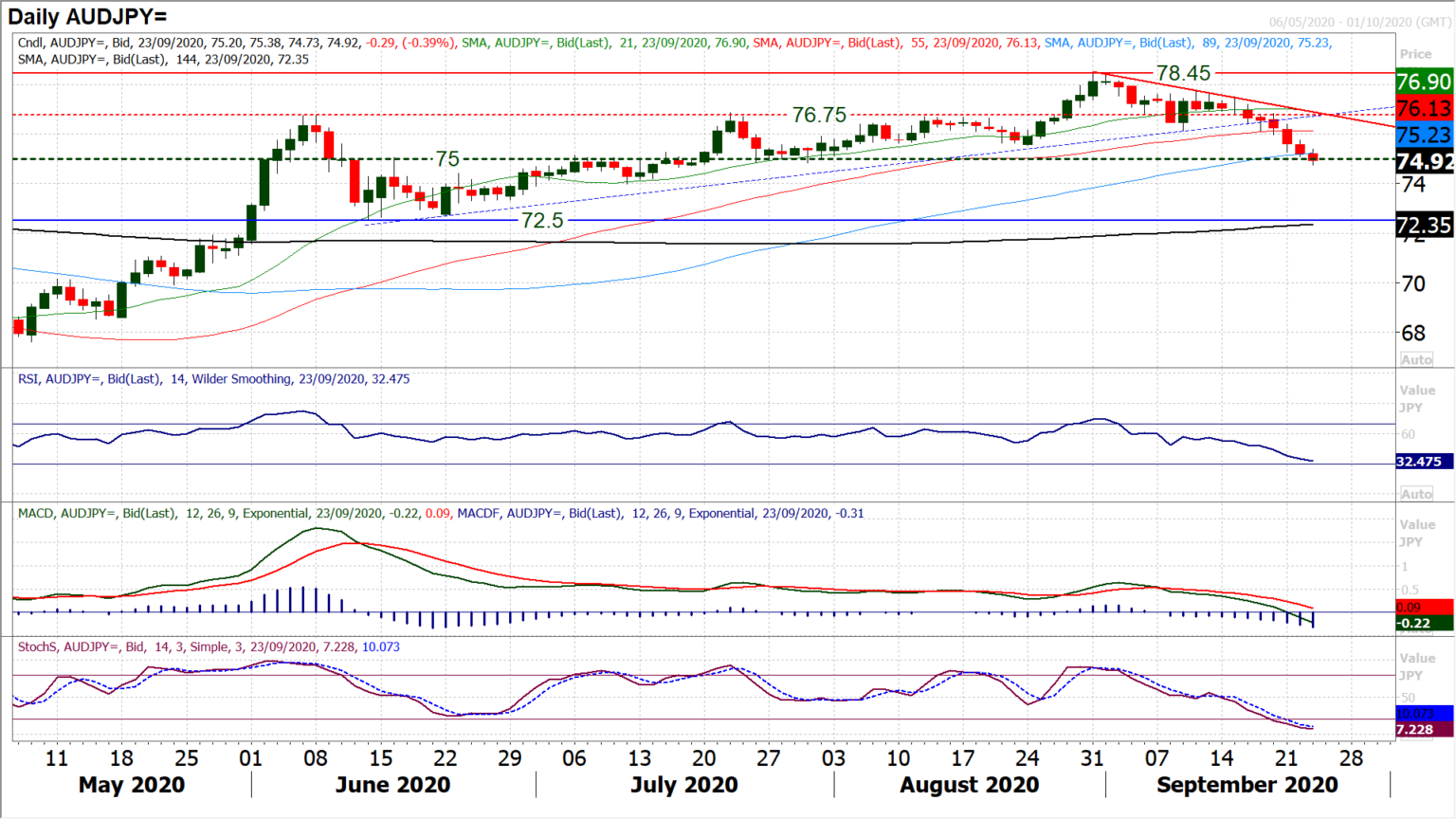 The euro is under mounting pressure now. Two decisive negative candles in the early part of this week have completely changed the outlook. A strong bear candle that closed below the support at 1.1750 has now been followed by an early move this morning to breach 1.1695. This is the market now looking to confirm a topping out. A close below 1.1695 would be the confirmation of a downside break of a two month trading range (effectively a top pattern) that implies around -300 pips of further downside in the coming weeks. An unwind towards the old resistance levels 1.1420/1.1490 would then be a viable target. Momentum is increasingly corrective with RSI into the mid-30s whilst also having downside potential. Increasingly the outlook is becoming one where intraday rallies are a chance to sell now, and any bull failure between 1.1695/1.1750 would add weight to this strategy. Below 1.1695 the first real support is not until 1.1490. 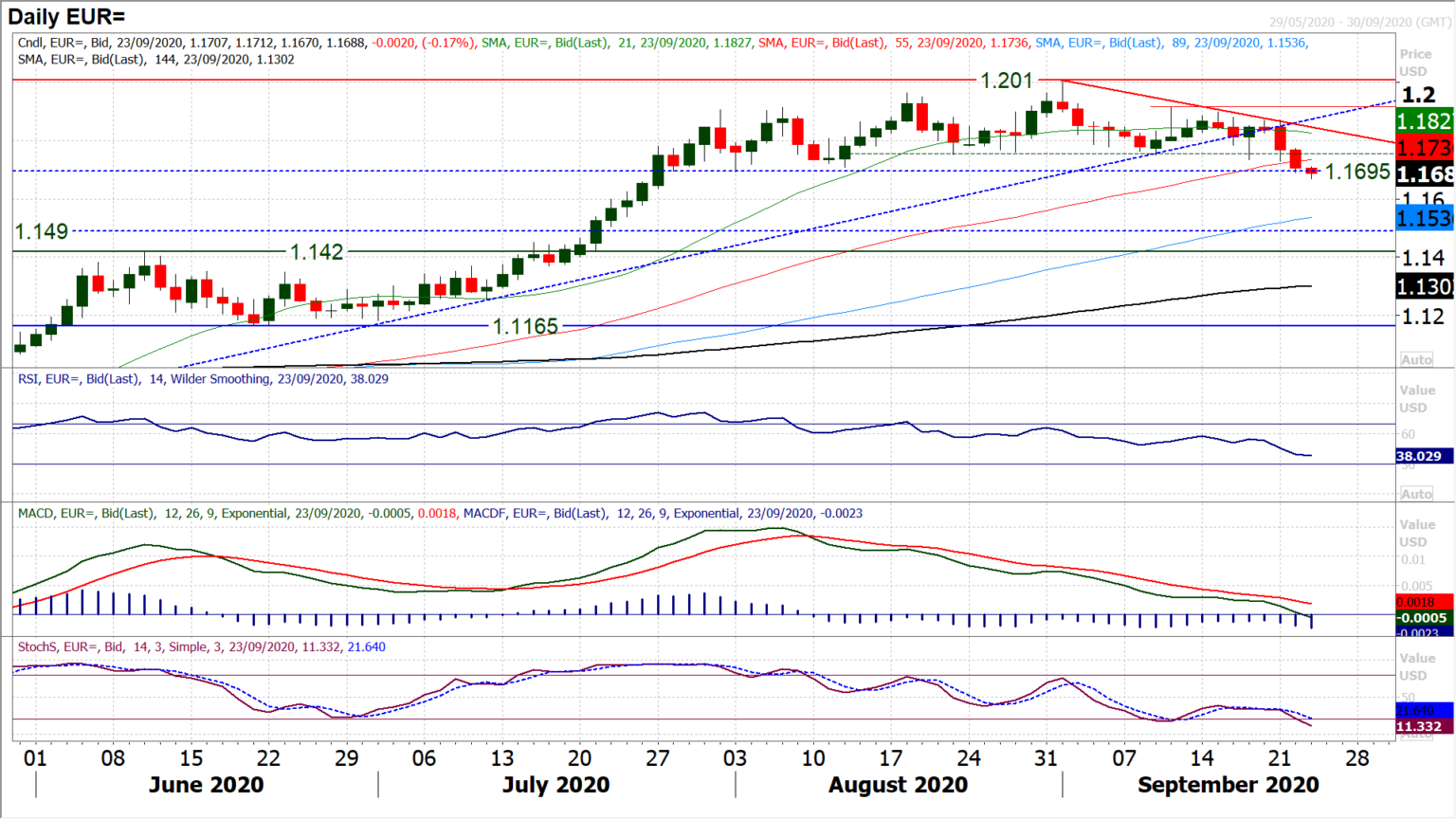 Selling pressure is mounting. After the recent rebound failed around 1.3000, three decisive negative candles have driven Cable below the support at 1.2760. This has opened a test of 1.2650 which are the old highs from Q2 2020. With the increasingly negative configuration on momentum indicators, the market is selling into near term strength. A downtrend of the past three weeks is around 1.2900 so any near term rebound is a chance to sell. The old 1.2760 support is the first line of resistance now. A downside break back under 1.2650 would essentially move the outlook into a new bear phase and the low 1.20s come back into play. The importance of 1.3000 as a medium term resistance is growing. 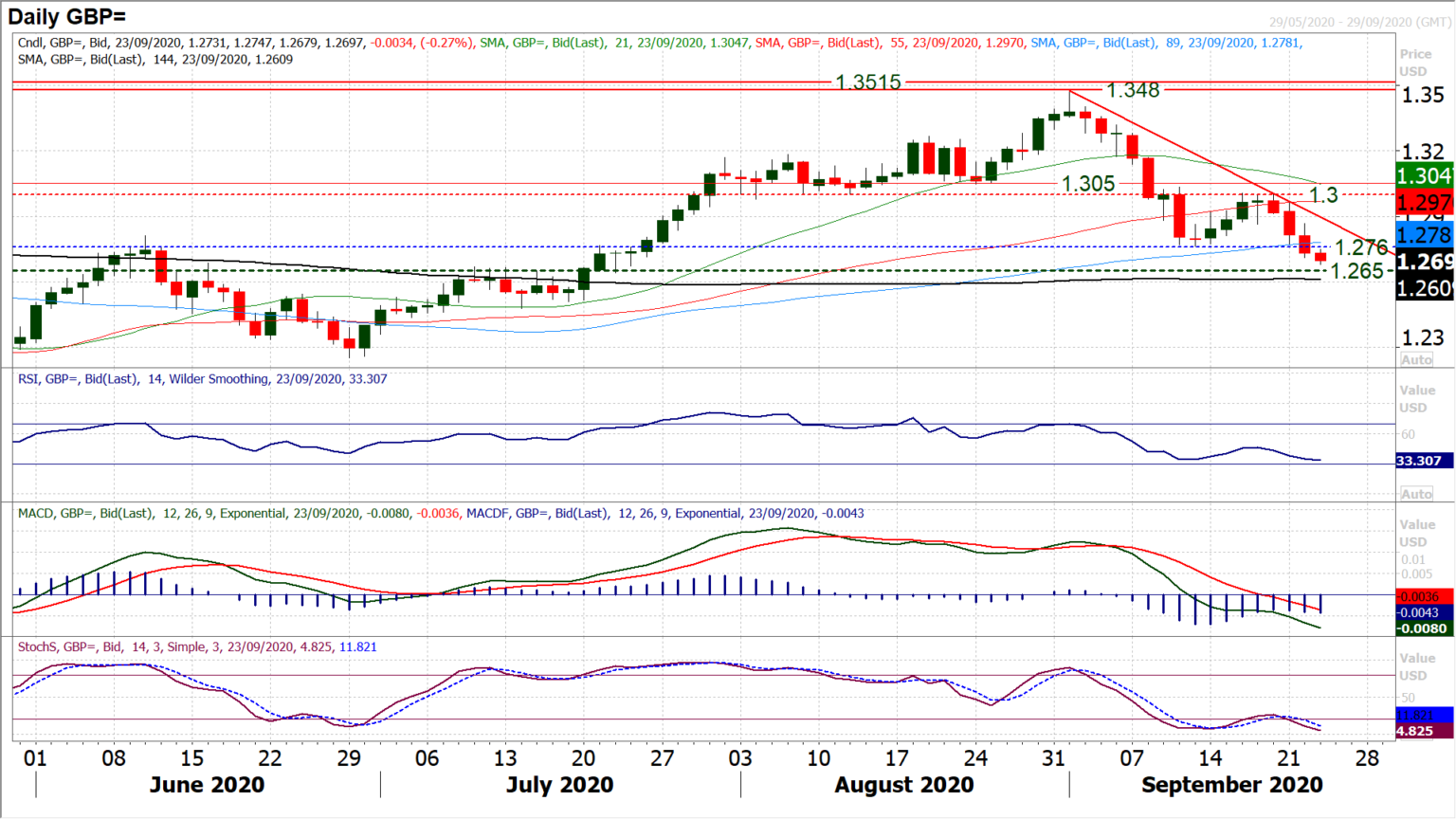 Another remarkable session of swinging sentiment on the dollar saw the eventual formation of a second decisive positive candle for Dollar/Yen. For a second consecutive session, an initial move lower was used as another chance to buy and this marks a significant shift in sentiment as the recovery begins to really develop now. The hourly chart shows the decisive move above 104.85 resistance to complete a small base pattern and imply +85 pips of additional recovery. This may not sound like much but there has been a significant shift in the outlook over the past couple of sessions where a recovery is now building strongly. Momentum indicators are reacting strongly too, with a bull cross now on Stochastics, whilst RSI has also turned higher. Early gains today add to this move. There is upside potential in this near term bounce, but the daily chart shows the need to pull through the initial overhead supply 105.10/105.30 from all the old August lows. This is being tested this morning. Above 15.30 brings the market up towards the old 106 pivot area again. The hourly chart shows 104.85 is growing as neckline support above 104.40 as a higher low. 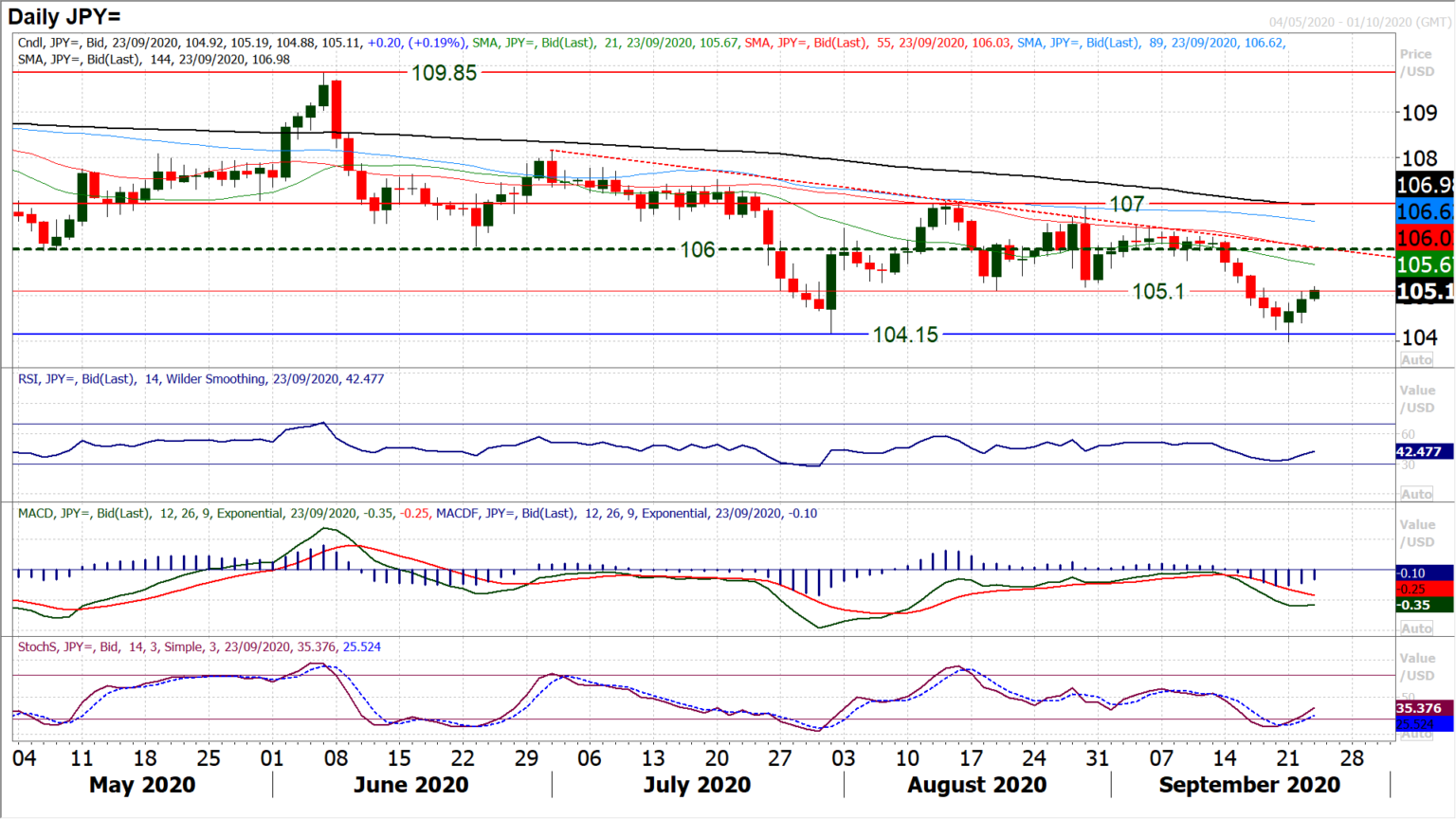 There has been a decisive shift in sentiment on gold in the past few sessions. Consolidation has turned to correction of the big March to August rally. This rally from $1451 to $2072 is now decisively retracing. Where the 23.6% Fibonacci retracement at $1926 had previously been supportive, now this has given way it has opened a move back towards the 38.2% Fib level at $1835. We have talked numerous time about the importance of the $1902 floor in this. Yesterday’s closing breach and continuation lower today show that this floor giving way opens the downside too. A test of the initial August spike low at $1863 is now on, however a deeper correction is now the risk. Momentum indicators are decisively corrective now, with RSI falling into the mid-30s whilst MACD and Stochastics accelerate lower. All have downside potential and suggest that near term strength is now a chance to sell. Below the spike low of $1863 the next real support is not until $1818. The hourly chart shows resistance building up around old supports too. Initial resistance this morning at $1894/$1906 with $1920 increasingly important now. 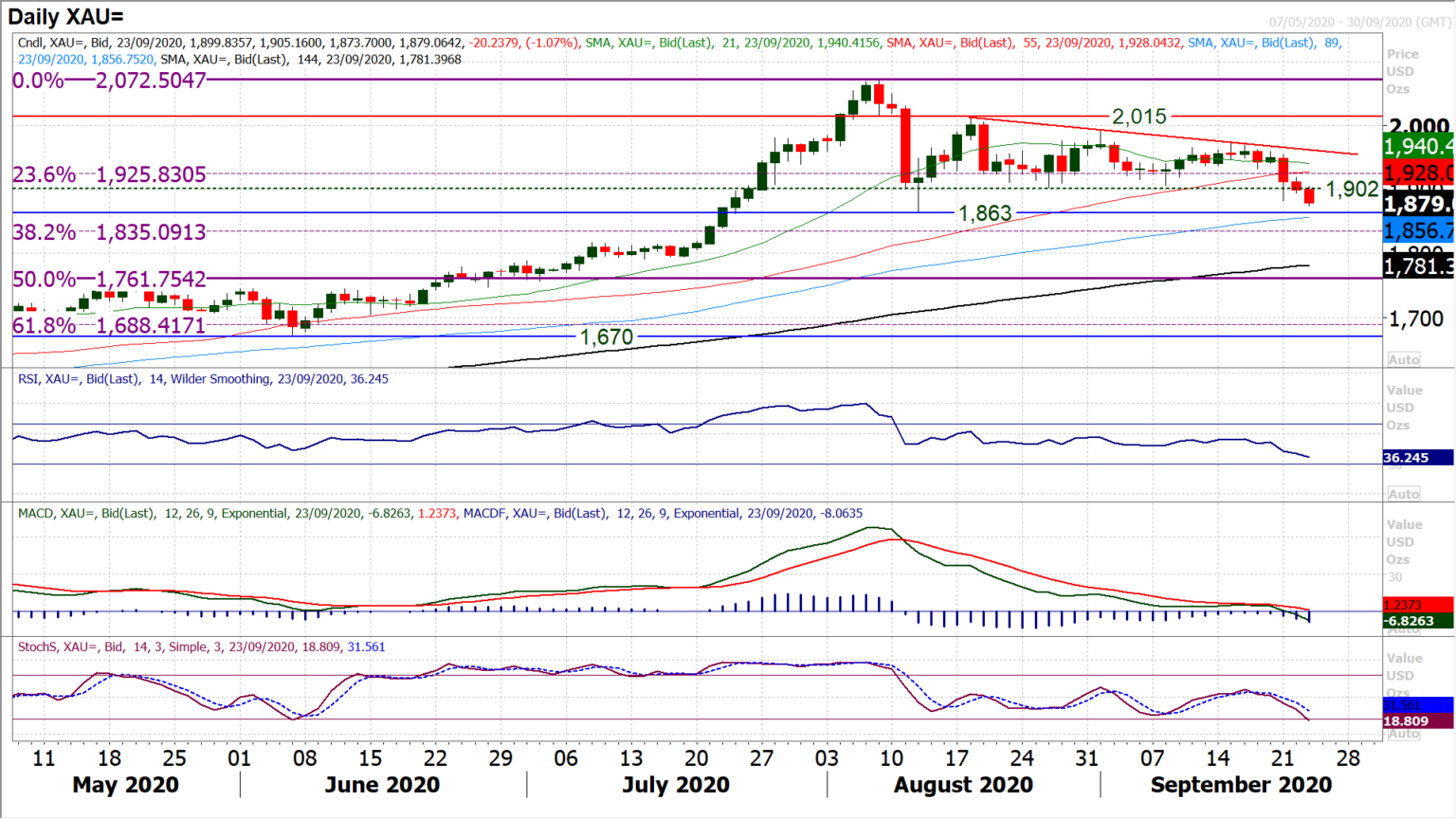 After the near term recovery fell over on Monday, a less certain outlook has begun to develop. An inside day (neutral candle) formed yesterday as support around $41.30 appeared to be holding. This support is under threat once more today as the market ticks back lower again. The mild negative bias to momentum suggests the ongoing pressure on this support, whilst if there is a closing breach, it would open the key $39.30 support again. Given the recent configuration of candlesticks, this is our preferred near term outlook now. The market needs to move back above $43.60/$44.25 resistance to enable a more positive outlook now. 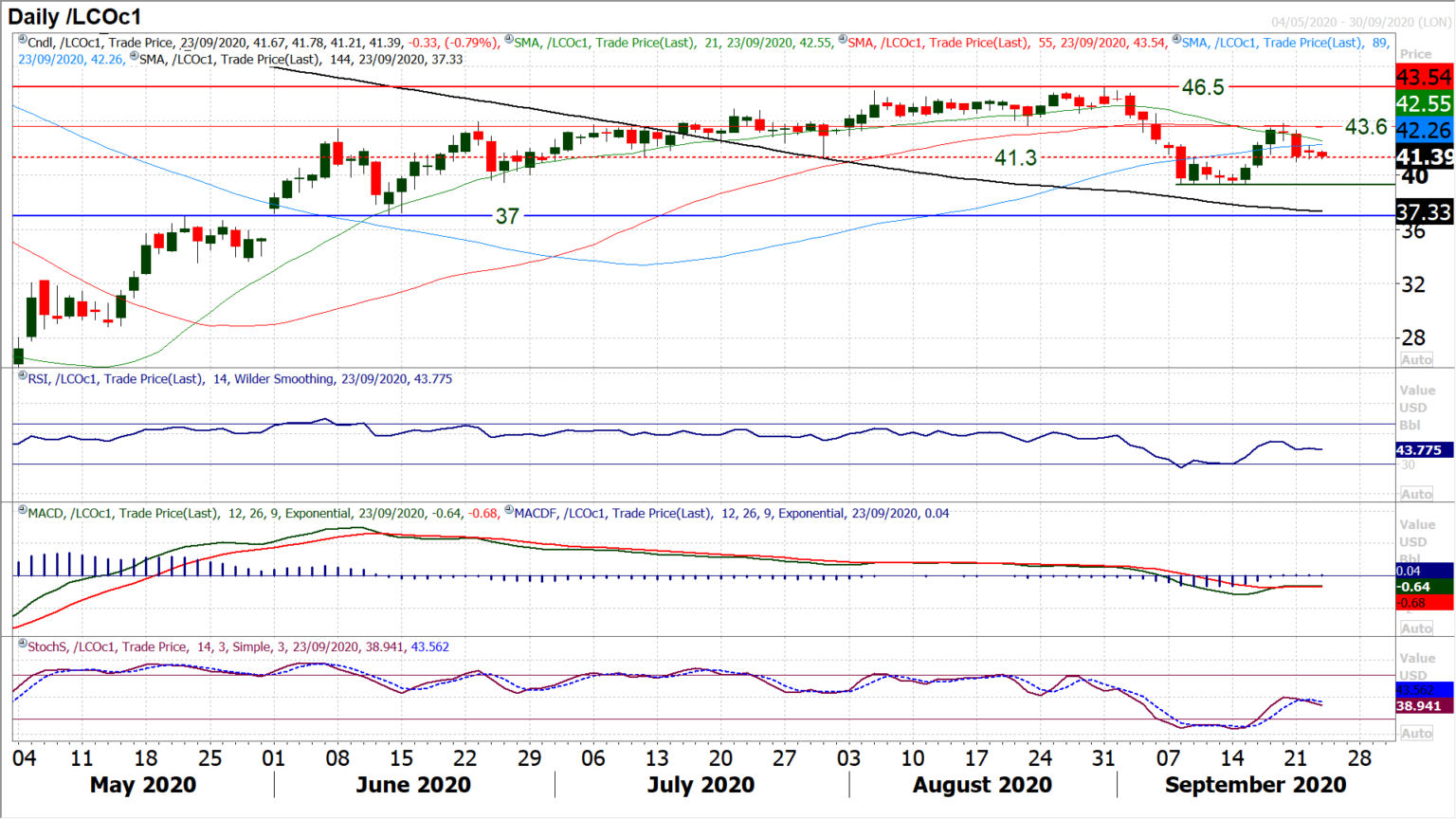 The selling pressure may have eased slightly yesterday, but as yet there is no decisive recovery underway. Starting with the positives, the reaction since hitting Monday’s low of 26,715 has been positive. Closing above the session mid-point on Monday held a sense of encouragement, whilst yesterday’s positive candle has added to that. However, the key test remains the band of neckline resistance between 27,445/27,580. How the bulls respond around here will be crucial for the medium term outlook now. A failure in this rebound would put pressure back on 26,715 and the downside targets of the six week top pattern (c. 26,000) come into view. Momentum is still corrective and the fear is that rallies are a chance to sell now. A close above 27,580 is needed to begin to generate a more improving outlook. 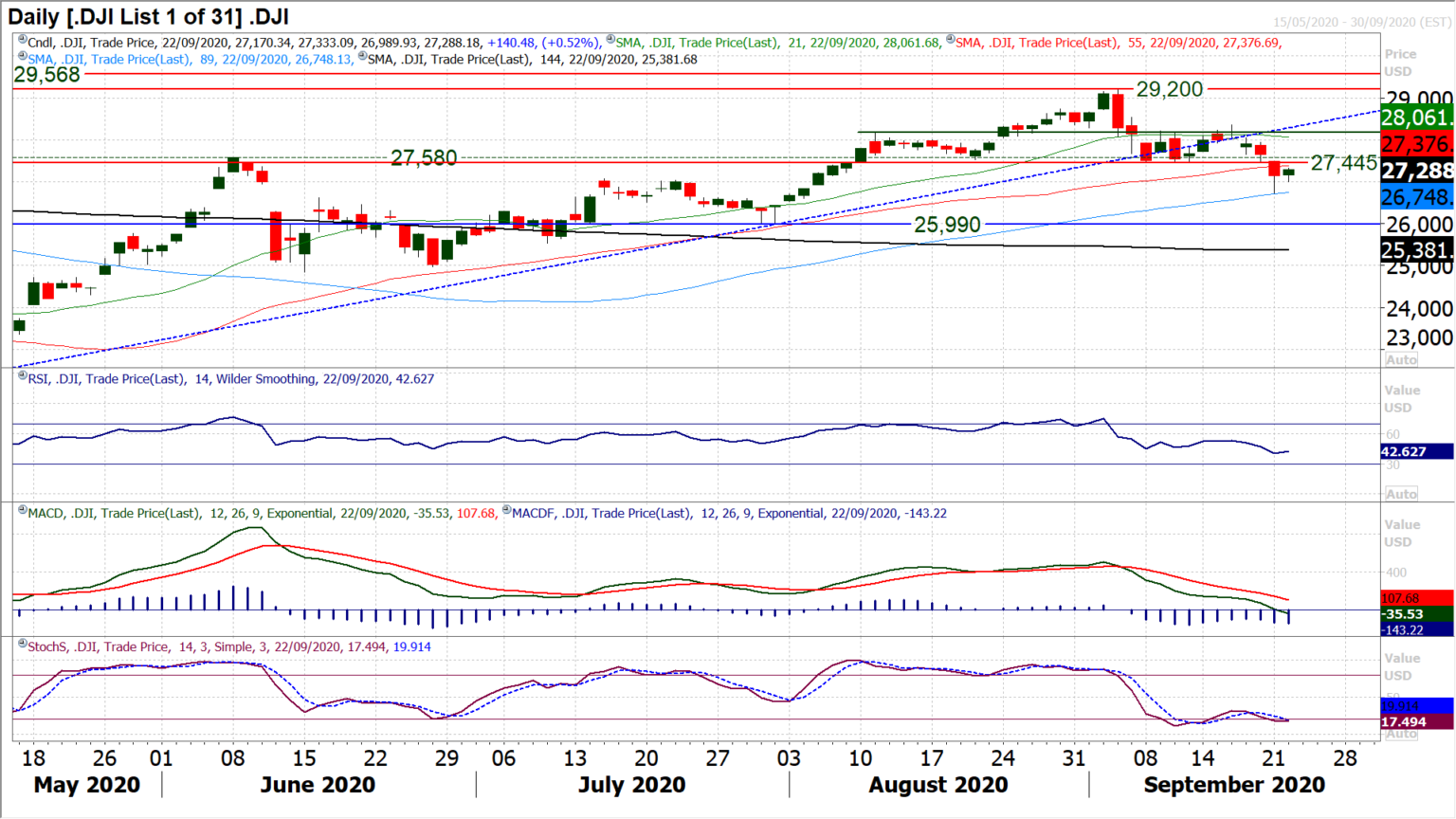