UK Banks In Focus, Can RBS Return To Profit?

UK Banks In Focus, Can RBS Return To Profit?

When we last looked at the UK banking sector at the end of last year, the general consensus was one of a mixed bag with concerns about rising consumer credit the main source of worry domestically. But for the underperformance of Barclays (LON:BARC) it would have been a much more solid year for the sector overall.

Despite rising inflation expectations, yield differentials have narrowed sharply from where they were at the beginning of 2017.

This flattening of the yield curve while not unique to the UK suggests that markets don’t have a great deal of confidence that interest rates will rise particularly sharply over the next few years. It is either that or there is a belief that inflation is likely to remain subdued, neither of which when looked through the prism of the last few days seems probable, though recent moves in yields would appear to suggest that perception is changing, with a significant steepening of the yield curve in the past four weeks.

Even now, despite inflation at around 3% and pressure on wages starting to rise the yield differentials between UK 10 year gilts and 2 year gilts remains below 1%, despite being well above that at the beginning of 2017 when the gap was at 1.15%. This gap has widened since the 15th January with the 10/2 spread on UK gilts rising from 0.73bp to 0.94bp now.

The steepening of this gap from the end of last year is encouraging, but nonetheless there is a danger that the Bank of England appears to be worrying too much about the political noise coming out of the Brexit negotiations than the wider problems in the UK economy.

The last 12 months have been fairly steady ones for the UK’s banks, and while we’ve seen a sharp drop in valuations in the past two weeks a higher interest rate environment is likely to be a positive one for the banking sector, at least in terms of margins. 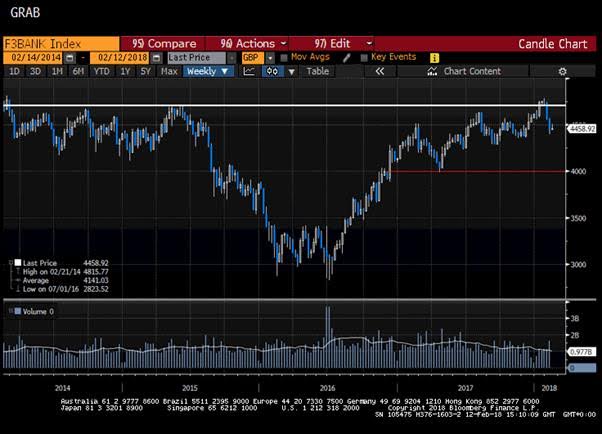 There is a wider concern when it comes to overexposure to companies with higher debt levels, as well as over indebted consumers, as recent events here in the UK have starkly highlighted

This is why Lloyds Banking Group (LON:LLOY), Royal Bank of Scotland (LON:RBS) and Barclays, latest and full year numbers will be of particular interest in the coming days.

We’ve heard a number of Bank of England policymakers express concern about an over indebted consumers over the past few months and that the process of managing up interest rate expectations is likely to be a balancing act.

When Lloyds Banking Group announced its Q3 numbers towards the end of last year it was notable that management set aside an additional £270m in respect of bad debt provision. At the time the general view was that this was sensible planning for a bank that remains highly exposed to the UK market amidst concern about rising car finance and credit card debt.

It now turns out that a good part of this provision was in respect of its exposure to Carillion, the UK construction company that has just collapsed into liquidation. It is quite likely that we could well see further provision in respect of this corporate horror story when Lloyds reports its full year results.

In Q3 the bank still managed to post record profits of £2bn, up from last year’s £811m, and above forecasts of £1.6bn, while also returning itself fully to the private sector, and free from government interference.

Despite this increased profitability the share price has persistently underperformed despite a UK economy that beat economic expectations last year, in spite of all the predictions of doom and gloom in the wake of the 2016 Brexit vote.

Given recent concerns about rising debt levels this week’s Q4 and full year numbers should give us a good indication as to how Lloyds management views the future outlook. Will it set aside further provisions in the wake of the Carillion collapse, as well as the prospect of rising interest rates? 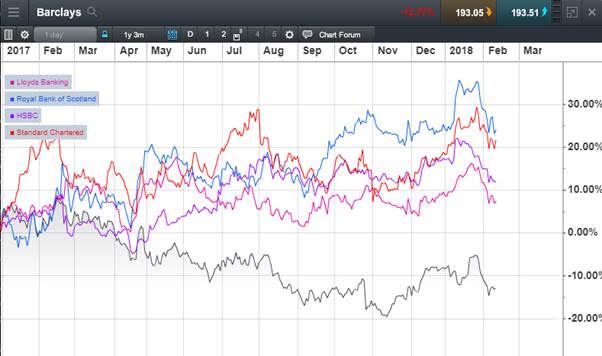 Amongst other reasons for UK banks resilience has been the insistence of the Bank of England that they hold more regulatory capital in respect of recent rises in consumer credit, particularly in car loans and credit card debt, a sensible measure given some of the uncertainty being generated by the ongoing Brexit negotiations.

Moving onto Royal Bank of Scotland and despite the bank being rarely out of the news over the last twelve months the share price performance has been fairly positive on optimism that finally after nearly a decade of losses the bank might finally turn a profit.

In the first half of last year the bank returned a profit of £939m, with optimism high that 2017 could see the first annual profit since 2008, after a decent Q3 as well.

RBS management have been careful to downplay the prospect that we could see the first annual profit in this particular decade, probably a wise course of action given the bank’s current woes.

At the end of 2016 the bank set aside £400m in respect of alleged malpractice at its now defunct Global Restructuring Group. At the time of writing the FCA is withholding the contents of a controversial report into the running of that division and which could prompt further legal proceedings down the line. There remains a risk that this sum could well rise if any of the malpractice evolves into something potentially more serious, or even criminal.

The bank was also exposed to the collapse of Carillion so we could see a provision hit here as well.

On the underlying business the bank continues to perform well, with a further £392m net profit in Q3, while the recent increase in the base rate is likely to help with respect to its margins for the final quarter, as it looks to post its first annual profit since 2008. The outlook continues to remain challenging given its recent decision to close 259 branches, nearly 25% of its network with the loss of 680 positions.

The good news is that the bank managed to resolve a number of high profile legacy issues last year but it still hasn’t settled its issues with the US Department of Justice over mortgage backed securities mis-selling.

This could be a positive as far as the overall profit numbers for 2017 are concerned as it won’t need to include any fine in its end of year numbers. That being said the bank may choose to set aside further provision to help cushion and final settlement into next year’s numbers, with the fine rumoured to be in the region of $10bn.

Barclays has had a year to forget if truth be told with CEO Jes Staley under investigation by the FCA over claims he tried to identify a whistle-blower, despite warnings not to, while the bank itself appears to be suffering a soft patch as it continues to push on with its restructuring program.

Its most recent Q3 set of results were not well received by investors with profits in the investment banking division sharply down, though in the wider scheme of things year to date profits for the year are still a healthy £3.4bn, as lower provisions and better margins in the UK business offset underperformance elsewhere. As with Lloyds and RBS the bank also had exposure to Carillion and could well set aside provision in respect of that.

There does appear to be some concern about the wisdom at devoting ever increasing resources to the investment banking side of the business at a time when it continues to act as a drag on overall profitability, and yield curves continue to remain challenging.

The bank has still to settle its dispute with the US Department of Justice over toxic mortgages, while the bank is now being charged by the Serious Fraud Office over the funding it received from Qatari investors in 2008. This seems like a distraction at a time when the guilty parties no longer work for the bank, but there is a risk in the longer term that the bank might lose its banking licence if it is found that there was a wilful breaking of the law on the part of bank senior management.

The bank is also on course to meet ring fencing rules that require a separate UK bank from the rest of the investment banking operations.

DISCLAIMER: CMC Markets is an execution only provider. The material (whether or not it states any opinions) is for general information purposes only, and does not take into account your personal circumstances or objectives. Nothing in this material is (or should be considered to be) financial, investment or other advice on which reliance should be placed. No opinion given in the material constitutes a recommendation by CMC Markets or the author that any particular investment, security, transaction or investment strategy is suitable for any specific person.