UK Banking Set To Remain A Challenge Into 2018

UK Banking Set To Remain A Challenge Into 2018

Compared to previous years, 2017 has been a fairly steady one for the UK banking sector despite rising concerns about a rise in consumer credit; the effect of low interest rates; as well as the emergence of further legacy issues for Royal Bank of Scotland (LON:RBS)

From the strong rally in the FTSE 350 Banks seen in 2016, the last twelve months have seen a period of consolidation for the majority of the sector with serial underperformer and perennial ball and chain of the UK banking sector, RBS standing out as a significant outperformer.

Could it be that after years of underperformance that the UK banking sector’s problem child could be on the cusp of emerging from the shadows of its previous crises?

After the sharp drop in the aftermath of the Brexit vote, the FTSE 350 Banks index has continued its slow march higher finding solid support at the 4,000 level earlier this year as predictions of a UK economic slowdown proved to be somewhat wide of the mark. 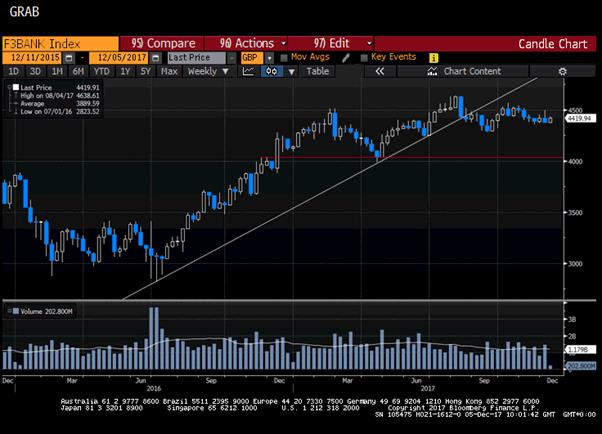 While concerns about UK banks, and the wider banking sector in general, have subsided to some degree that doesn’t mean that the problems that we were concerned about at the beginning of the year have gone away.

The underperformance of Germany’s largest bank Deutsche Bank (DE:DBKGn) suggests that investors remain far from convinced that its problems are behind it despite its recapitalisation earlier this year, while the German banking sector remains hamstrung by negative rates and too many banks and too many branches.

On the plus side crude oil prices, after an initially sticky start to the year, have traded at much higher average prices than they did in 2016, while we are starting to see some modest inflationary pressures start to manifest themselves, which in turn has prompted the US Federal Reserve, Bank of Canada and the Bank of England to raise interest rates this year

Despite these rate rises we haven’t seen a corresponding steepening of yield curves, though some banks have managed to maintain their net interest margins.

It has also been notable that UK and European banks have lagged behind their US counterparts when it comes to investment banking revenues, and profits expectations.

The first year of President Trump’s presidency has been one of unfulfilled expectations across the board from tax reform to possible reform of Dodd Frank.

One of the things that has held UK bank share performance back has been the insistence of the Bank of England that they hold more regulatory capital in respect of recent rises in consumer credit, particularly in car loans and credit card debt.

While the UK economy has slowed quite a bit from the levels we saw in 2016, it hasn’t done anywhere near as badly as most forecasters predicted towards the end of last year, however the continuing uncertainty over the Brexit negotiations has hampered some of the upside progress, while recent stress tests have seen UK banks up their resilience to future shocks quite substantially.

Somewhat surprisingly this year’s outperformer has been Royal Bank of Scotland despite the fact that it still hasn’t completely put its problems with US regulators completely behind it, and is also being investigated by the UK regulator over alleged malpractice in its now defunct Global Restructuring Group.

In the first half of this year the bank returned a profit of £939m, with optimism high that this year could see the first annual profit since 2008, after a decent Q3 as well.

At the end of last year the bank set up a compensation fund in respect of misconduct at its GRG unit to the tune of £400m, however this sum could well rise in the coming months given recent headlines that the bank deliberately excluded thousands of small businesses from the scheme.

On the underlying business the bank continues to perform well, with a further £392m net profit in Q3, while the recent increase in the base rate is likely to help with respect to its margins for the final quarter, as it looks to post its first annual profit since 2007. The outlook continues to remain challenging given its recent decision to close 259 branches, nearly 25% of its network with the loss of 680 positions.

The good news is that the bank has resolved a number of high profile legacy issues this year but it still hasn’t settled its issues with the US Department of Justice over mortgage backed securities mis-selling which could wipe out any profit for the current year. 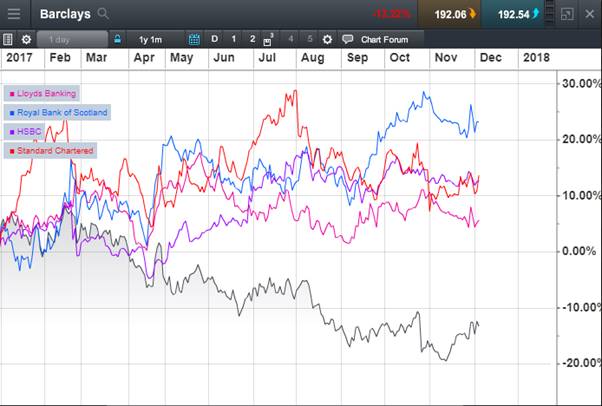 At the lower end of the food chain Barclays (LON:BARC) has had a wretched year, with CEO Jes Staley under investigation by the FCA over claims he tried to identify a whistle-blower, despite warnings not to, while the bank itself appears to be suffering a soft patch as it continues to push on with its restructuring program.

Its most recent Q3 set of results were not well received by investors with profits in the investment banking division sharply down, though in the wider scheme of things year to date profits for the year are still a healthy £3.4bn, as lower provisions and better margins in the UK business offset underperformance elsewhere.

There does appear to be some concern about the wisdom at devoting ever increasing resources to the investment banking side of the business at a time when it continues to act as a drag on overall profitability, and yield curves continue to remain challenging.

The bank has still to settle its dispute with the US Department of Justice over toxic mortgages, while the bank is also being investigated over the funding it received from Qatari investors in 2008.

As for the rest of the sector this year’s performance has been slow but steady with Lloyds Banking Group (LON:LLOY) lagging behind both HSBC (LON:HSBA) and Standard Chartered (LON:STAN).

This is disappointing given that of all the UK focussed banks it appears to be further ahead in terms of restructuring its long term business.

In its Q3 trading update the UK focussed bank was able to post Q3 profits of £2bn, up from last year’s £811m, and above forecasts of £1.6bn. Despite this welcome news the share price response has been muted at best and remains well below the highs we saw just before this year’s UK election.

This share price weakness is probably down to concern about a slowing UK economy and a bank that has a significant chunk of the lending market at a time when the Bank of England has been expressing concern about an over-leveraged consumer. This exposure has been magnified in the last twelve months with the banks purchase of the MBNA credit card business from Bank of America (NYSE:BAC).

This may help explain why the bank increased its impairment provision in Q3 to £270m, a number which was slightly above what markets had been expecting. This seems eminently sensible at a time when there is rising concern about car finance and credit card debt. The bank also joined RBS in also announcing further job losses with the closure of 49 branches on the basis that more and more customers are banking digitally.

According to Bank of England figures it is estimated that total UK credit card debt is around £67bn, while car finance is just below £60bn, across the whole of the UK.

As one of the UK’s major lenders it is only sensible to mitigate against some of those loans going bad, and given recent requests by the Bank of England for banks to boost their capital reserves by up to £10bn this could be an area which may start to weigh on profitability, especially if rates stay where they are.

The performance from HSBC has been fairly unremarkable with only modest rises in the share price, with most of the gains in terms of profitability being driven out of its Asia business, though this performance may be more due to the fact that the shares are stuck near multi-year highs and as such already richly valued.

Having made modest gains this year the UK banking sector has been a bit of a mixed bag with concerns about rising consumer credit the main source of worry domestically. But for the underperformance of Barclays it would have been a much more solid year for the sector overall.

Despite rising inflation expectations, yield differentials have narrowed sharply from where they were at the beginning of the year.

This flattening of the yield curve suggests that markets don’t have a great deal of confidence that interest rates will rise particularly sharply over the next few years. Either that or they think that inflation is likely to remain subdued.

For example, at the beginning of this year the difference between UK 10 year gilts and 2 year gilts was at 1.15%, whereas now its sitting just below 0.8%, despite having seen a rise in interest rates since then. This narrowing of yield differentials is likely to be a concern if sustained at a time when banks may have to be more discerning who they lend to.

Another factor likely to dictate investor risk is whether or not we see significant progress in the Brexit talks over the next few months.

DISCLAIMER: CMC Markets is an execution only provider. The material (whether or not it states any opinions) is for general information purposes only, and does not take into account your personal circumstances or objectives. Nothing in this material is (or should be considered to be) financial, investment or other advice on which reliance should be placed.

No opinion given in the material constitutes a recommendation by CMC Markets or the author that any particular investment, security, transaction or investment strategy is suitable for any specific person.