Try This Energy ETF To Supercharge Your Portfolio

Try This Energy ETF To Supercharge Your Portfolio

What is weighing the markets down right now?

There are many fears contributing to this heightened level of uncertainty, holding people back from investing at this time:

“This too shall pass…”

More than anything, the markets hate uncertainty. As we've seen through countless presidencies, it doesn't necessarily matter who is in the White House, since markets adapt once uncertainty is lifted. Our fears are always greater than the reality of the issues we must solve.

What matters to the markets is uncertainty. Even the devil we know is better than the imaginary demons uncertainty provokes among otherwise rational people. The US presidential election will be over in 6 days. The great fear that it will take weeks to count all the votes still persists. And yet, 66 million Americans and counting have already cast their ballots, breaking early voting records.

I myself will be away from my polling place on Election Day. My vote will be handed directly to a duly authorized official at my local library before that time.

Knowing that it may take some time to count all the votes, and understanding the danger of waiting in line many more Americans are likely to cast their ballots in the coming days rather than waiting for Nov. 3.

I believe the worst fears the headline writers at most of our media outlets have promulgated—that it will take weeks to determine the winner—are overblown. If I am wrong, this may delay, but not sidetrack, the next move up in the US and world markets.

Regarding COVID-19, I have a personal friend who is currently enrolled in Pfizer's (NYSE:PFE) human trials study. The company states that it believes it will be able to begin offering an approved vaccine for the most at-risk populations by the end of the year. The “end of the year” sounds like a long way away, but it is just nine weeks hence. Even if the company encounters a problem, there are three other major ethical drug pharmaceutical companies that are not far behind them, and scores more around the world ready to contribute.

Thus, this uncertainty, too, will soon be behind us. That does not mean we will be out of the woods immediately. It does mean that it won't take all that long for those able to be vaccinated to move on with their lives. Even if it will take longer than we might have hoped for the economy to fully recover, we will be moving in the right direction. And direction is what moves markets.

How To Invest In This Scenario

The FANMAG stocks—Facebook (NASDAQ:FB), Apple (NASDAQ:AAPL), Netflix (NASDAQ:NFLX), Microsoft (NASDAQ:MSFT), Amazon (NASDAQ:AMZN) and Alphabet (NASDAQ:GOOGL)—which have led the market for most of this year, are no bargains. It is easy to believe their momentum must continue. I disagree. I still want to be invested in technology companies, but I see a wonderful sea change coming to sectors that are currently out of favor.

Energy, Materials, and Industrials should perform exceedingly well in an environment where the economy is returning to a more even keel. Case in point: I have been casting about looking for another energy company that has the same rebound capability as Exxon (NYSE:XOM), which I currently hold in my own investment portfolio.

The very first name that percolates to the top of my search is, of course, Chevron (NYSE:CVX). But I also wanted to buy one or more of the refiners in America that are depressed as much or more as the oil and natural gas explorers and producers are.

In so doing, I believe I have found the best possible choice: a relatively un-remarked-upon ETF

The fund is a market-cap index of the US oil and gas industry. Buying an “all-market” index with the good, the bad, and the ugly does not make sense to me. I'd rather try to buy the good via the various factor funds that are out there today.

But in this case— while there may be a few ugly babies in this ETF portfolio, they are way down the list in terms of their representation. The entire energy sector is so beaten down it has entered my favorite buy point: quality stocks that represent value and have had their growth stymied, but look now to see robust growth as the economy rebounds. 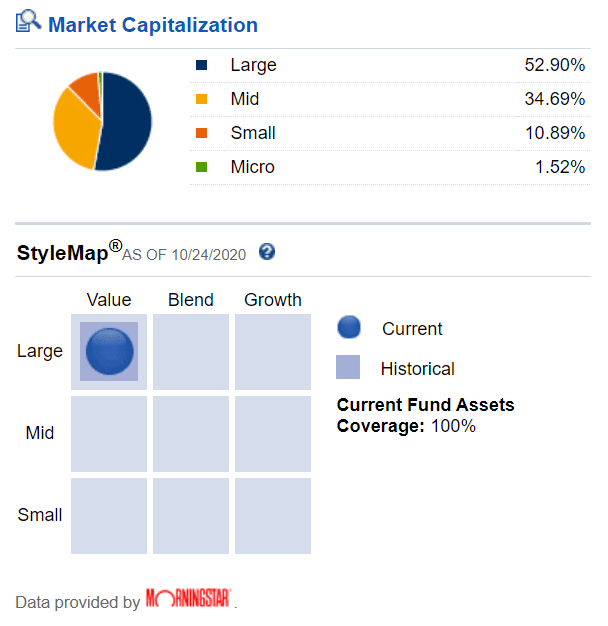 I set out to find an addition or two for my Exxon holding and instead discovered a viable alternative. Since FENY is capitalization-weighted, XOM and CVX constitute between them more than 43% of the total portfolio. Add the three biggest refiners and I am at more than 50% of this fund’s holdings. In addition, there are five more beaten-down firms in the E&P, pipeline and equipment world, all of which are way down. The 10 top holdings, constitute 72% of the portfolio. I know and like every one of these: 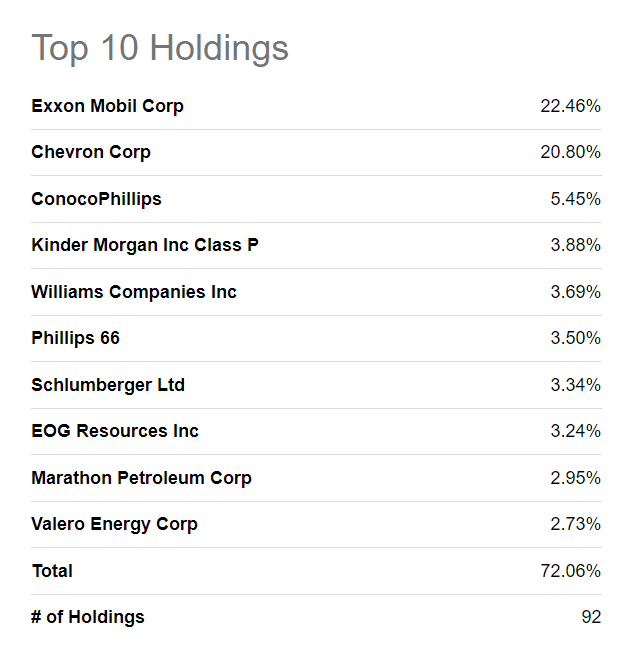 This beaten-down ETF is wonderfully representative of the entire US energy sector. XOM is the fund’s biggest single holding, so by replacing my XOM position in the portfolio with FENY, I will still have my favorite “energy survivor” and I will also own the others as well.

The other 82 positions constitute just 28% of the fund, but many pay such substantial dividends—some of which I imagine will be reduced if the economic recovery is prolonged—that I have not only made an equity switch by this trade but have increased the dividend payout as well, in this case, to double digits. Here are some of the positions with the largest dividends:

Please note how closely this ETF follows its benchmark:

Notice, too, the expense ratio—less than 0.09%. That is not decimal dust but it is close.

Do not join me in this investment if you believe oil and natural gas companies are in their final death throes. Seriously—many people actually believe this.

They point to China, where almost every new car sold is an electric vehicle (EV) of some sort. What they do not realize is that China is today building more coal power plants than any other nation and that much of the electricity powering the batteries of all these EVs is produced by coal.

The graphic below clearly shows those coal-fired power plants that are in the process of being closed around the world, those still operating, those newly built, and those under construction. (To see more granularity, visit the website cited below as the source. You can zoom in on any region of the world...) 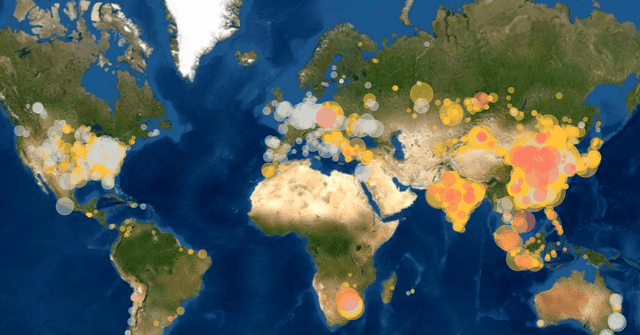 As the US energy industry recovers, I imagine the PRC (Peoples Republic of China) may well find it worthwhile to switch some of the 70% of the electricity that is currently produced by coal in favor of liquified natural gas (LNG) supplied by the US, Australia and other big producers of natural gas, a much cleaner-burning fuel than coal.

The US energy industry is composed of wind, solar, biomass, geothermal, hydro in addition to oil and natural gas—the two Mother Nature thoughtfully provided for our use as already-compacted batteries. I have no doubt that the US energy industry will gain ascendancy in world markets and I believe an ultra-low-cost energy fund that has as its largest holdings the biggest and arguably the best value to be had is the way to invest right now.

Abused, scorned and forgotten as Big Energy might be, these companies represent distinct value at these levels. Some patience might be required but I am convinced they will be around, and return to profitability, for a long time to come. Some day we might be able to generate 100% of our electricity, 100% of our transportation, 100% of our manufacturing and 100% of our HVAC needs from renewables.

That day is not now. For the immediate future, oil and natural gas will still be the big dogs in all the above areas. I want to own them now when they are cheap.