The coronavirus pandemic, its impact on the economy, and efforts to combat both challenges continue to roil the market for US Treasuries, with sentiment shifting bullish or bearish depending on the news.

Bears predominated last week, amid relatively strong economic data, hopes for vaccines, and the prospect of a new stimulus package from Congress. Positive signs for the economy are bearish for Treasuries because the government bonds provide a safe haven for worried investors and good economic news makes them less concerned.

Yields on the benchmark 10-year Treasury bond rose to 0.71% over the week as prices declined (yields move inversely to prices). 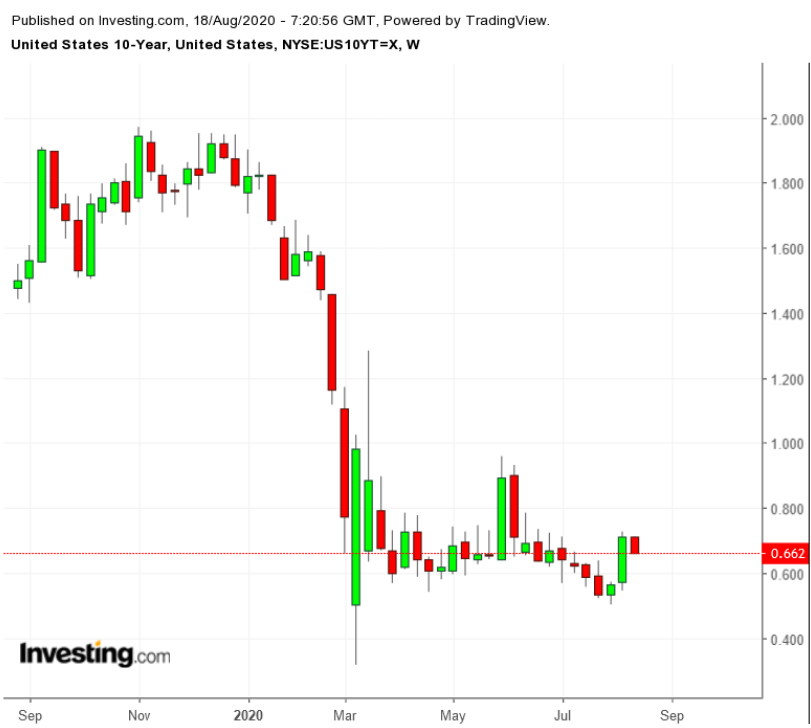 Sales of $112 billion in Treasury notes and bonds, including $26 billion in 30-year bonds, also contributed to softer prices.

Sentiment shifted again at the beginning of this week as COVID-19 fears surged on the news that testing in the US was declining and that Congress was interrupting its August break to debate funding issues in the US Postal Service amid worries about mail-in voting in November.

The post office funding and its impact on mail-in voting continue to divide lawmakers, with Democrats seeking more money for USPS as part of their stimulus package and Republicans saying they are willing to supply the funds in a separate action.

Last week, investors were heartened by new applications for unemployment benefits falling below 1 million for the first time since March, by a better-than-forecast gain in retail sales once volatile car and gas sales were excluded, and higher-than-expected price increases (yes, a gain in inflation is considered positive news in this environment).

Inflation projections over 10 years, as derived from the real yield on Treasury inflation-protected securities, rose to 1.72% on Thursday, compared to 0.50% at one point in March, before finishing the week at 1.67%. 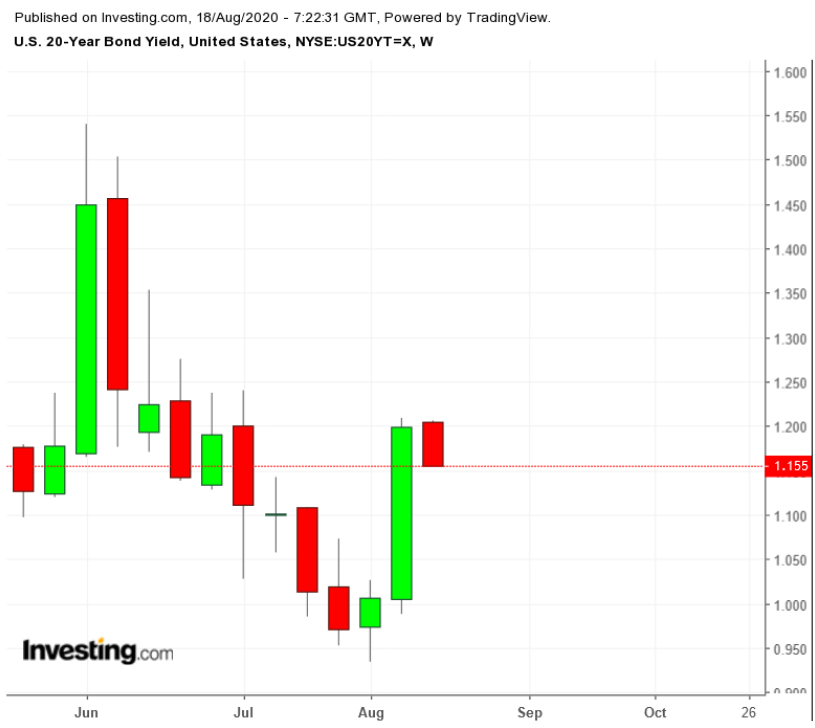 The roller-coaster ride is likely to continue this week. Sales of $54 billion in 13-week Treasury bills and $51 billion of 26-week bills on Monday will lead up the sale of $25 billion in 20-year bonds on Wednesday—all of which may contribute to lower prices and higher yields.

The Democratic National Convention, which will be held virtually instead of in its planned venue in Milwaukee, opened Monday evening and culminates Thursday with the formal nomination of former Vice President Joe Biden as presidential candidate and California Senator Kamala Harris as his running mate.

The ticket is already leading in the polls and candidates usually get a bump from the convention, though it’s hard to say what will happen with all the political theater missing this time around.

Meanwhile, the minutes of the Federal Reserve’s policy meeting July 28-29 will be released on Wednesday and analysts will be looking for clues about how the Fed will be shifting its view on the inflation target. The US central bank is anticipated to go from just tolerating increases above the 2% target to actively working in that direction to achieve an average rate of 2% over time. However, as the TIPS inflation expectation indicator suggests, no one forecasts inflation to get near 2% anytime soon.