Treasury yields tumbled on Monday as a raft of bad news sent investors to the safe haven of U.S. government bonds.

Where to begin? It turns out Democrats don’t have as complete control of the government as presumed. There's a pat situation in the Senate, a paper-thin majority in the House of Representatives, and a president who has yet to command allegiance.

This is bad news}} for the $1.9 trillion fiscal stimulus package President Joe Biden has pledged to push through with his putative control of Congress. Not so fast, say Republicans, not-so-secretly aided and abetted by some Democrats.

A bipartisan group of senators led by Republican Susan Collins of Maine and Democrat Joe Manchin of West Virginia pushed back on the price tag, and specifically a $1,400 payment to individuals whether they need it or not. They prefer something much more modest to start with – namely, some help getting vaccines to people.

Meanwhile, House Speaker Nancy Pelosi proceeded with her plan to hijack the Senate by forcing them to confront a motion to remove a president who is already out of office. Her declared goal is to force accountability and to ban former president Donald Trump from future public office.

Supreme Court Chief Justice John Roberts, who is supposed to preside over impeachment trials in the Senate, has already bowed out because the way he reads the Constitution he is only obliged to run trials for sitting presidents. The honor of presiding over this trial on a single charge of inciting insurrection will go to Patrick Leahy of Vermont, the Democrat who is president pro tem of the upper house.

On top of the domestic fracas, investors are taking fright at Europe’s economic prospects, as data from Germany hints at a double-dip recession. Then there is the government crisis in Italy, where the prime minister evidently thinks he can get majority support for his leadership without a snap election simply by resigning.

Yes, worries about Europe can depress Treasury yields. Even the Dutch are rioting against more closures as European leaders impose lockdowns and curfews to contain a resurgence of COVID-19 infections, including a new variant that may be more dangerous. 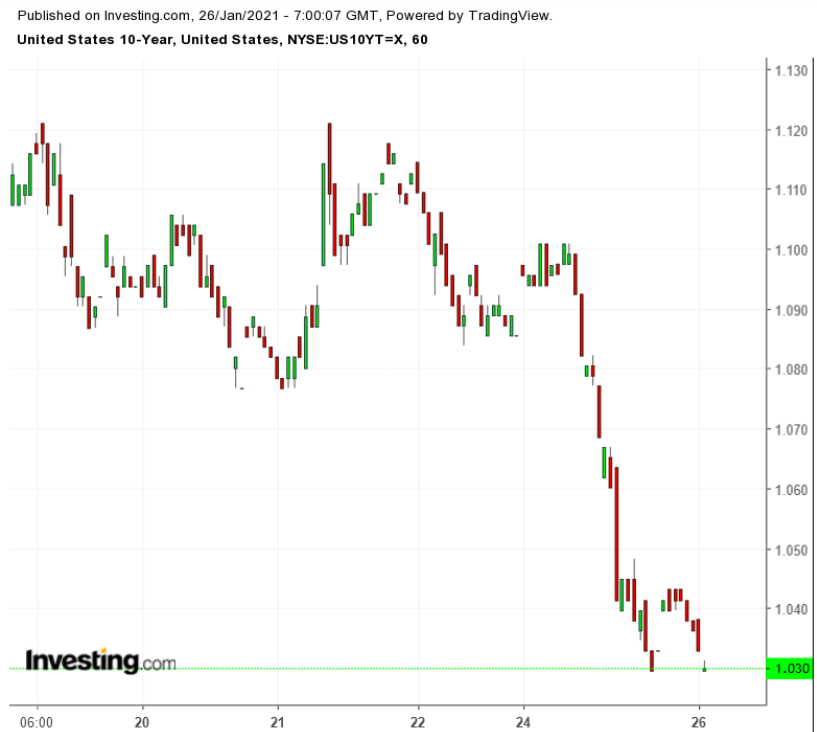 Yields on the benchmark 10-year Treasury note fell nearly 6 basis points on Monday, to 1.033% in late trading. The 30-year yield fell 6 bps to 1.796%. The yield curve also flattened, as the closely watched spread between two-year and 10-year notes fell to 91 bps, the narrowest gap in three weeks.

The drop of more than 10 bps in the 10-year yield from near 1.14% in more optimistic times earlier this month may continue, though analysts expect the decline to pause at the 1.0% threshold.

The results of a $61 billion five-year note issue are due out Tuesday, and $62 billion of {{23704|seven-year notes on Thursday.