Timing is always important. Sometimes, it’s even a telltale sign.

In the cannabis sector, it can be both. If you need convincing, look no further than what has happened at Hexo (NYSE:HEXO), (TSX:HEXO) in the last week.

The Quebec-based cannabis grower issued a press release on Dec. 26, Boxing Day, announcing a US$25-million (C$32.6 million) registered direct offering. At first it seemed like odd timing because Boxing Day is an official holiday in Canada.

That sparks the question: why was the company making this move on a holiday?

Although the Toronto Stock Exchange was closed that day, it could be argued that Dec. 26 was not necessarily that odd a time to make the announcement. After all, it wasn't a holiday in the U.S., where the company’s stock is also traded on the New York Stock Exchange. But the exact day of the announcement was not all that was odd about the timing of Hexo’s move.

But before we get to that, let’s look at the announcement itself. The company disclosed that it would issue just under 15 million new shares to raise the targeted US$25 million Hexo was seeking.

As the statement claimed, the company reached a deal with institutional investors “for the purchase and sale of 14,970,062 common shares at an offering price of US$1.67 per share for gross proceeds of US$25.0 million.”

The cash will be used as working capital to fund “research and development to further advance the company’s innovation strategies.” 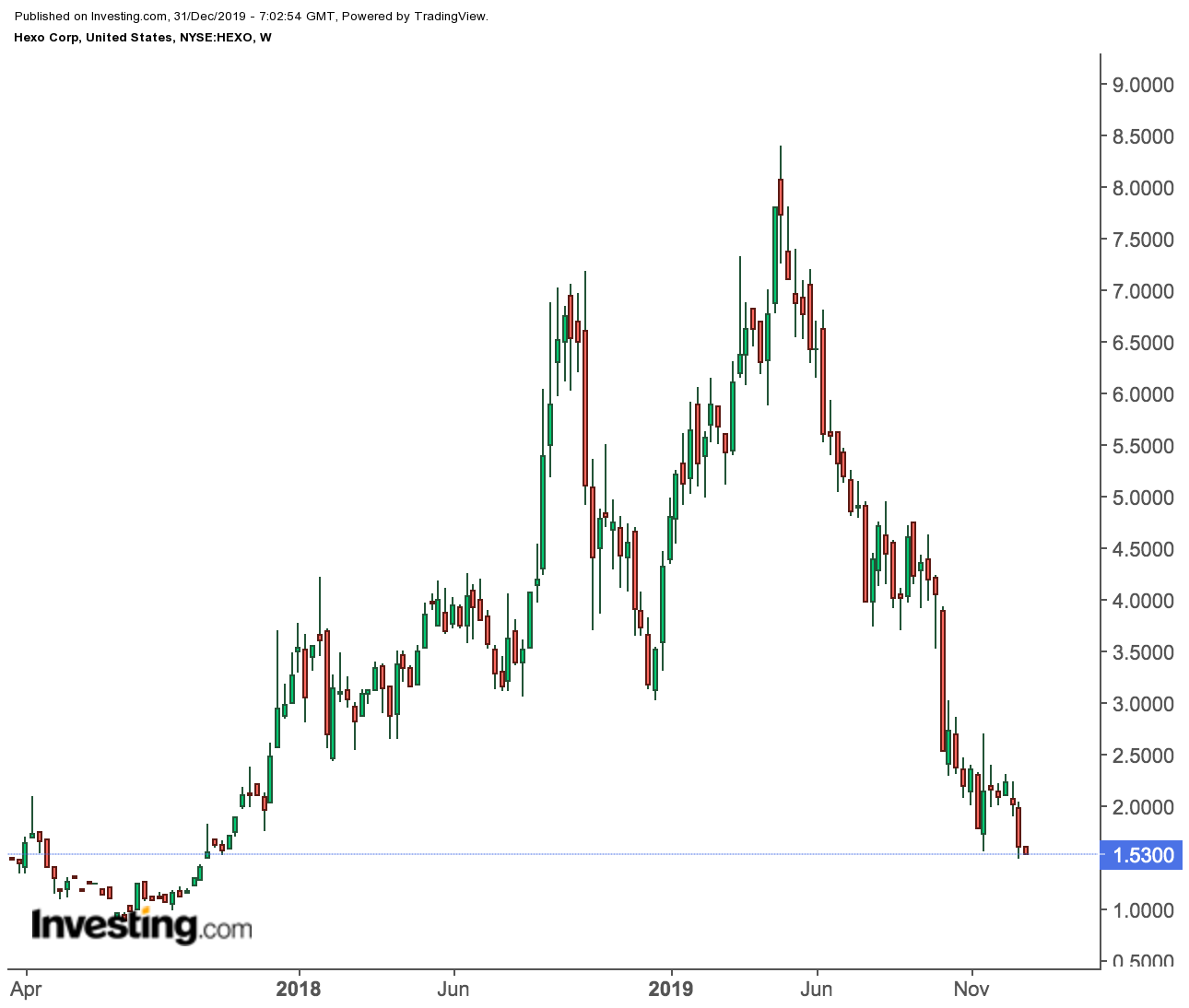 Having another day to consider what the move meant did not change things. The stock took another hit yesterday, losing an additional 4.7% to end the day at US$1.53 (C$2.00), a new all-time low.

A week earlier, the company revealed its latest quarterly earnings for the three-month period that ended Oct. 31. That is when it showed a US$47.4 million (C$62.4 million) loss, a substantial increase from the same period the year before when it posted a US$9.8 million (C$12.8 million) loss.

The company continues to burn through its cash, while downsizing its operations. Yet, it still hangs on to its expectation of reaching profitability in 2020. Perhaps investors are feeling the weight of too much reality to hang on to that expectation.

How Expectations Did Not Quite Meet Reality

Investors who have bet on Canadian-based cannabis companies during the past year’s so-called ‘green rush’ have experienced the downside that comes when reality does not live up to expectations. They can quantify it in the loss of share value the major players across the sector have posted since weed was legalized in the fall of 2018.

Another take on the sector’s disconnect between expectations and reality: a recent report published by Statistics Canada earlier this month disclosed the following: the amount of legal cannabis sold between Oct. 17, 2018, when marijuana was legalized, and September 2019 was C$907.8 million (US$695.6 million), was far below what some analysts had predicted in the lead-up to legalization.

In anticipation of legalization, Deloitte had predicted the market would hit C$4.34 billion (US$3.32 billion) in the first year, while another estimate by Brightfield Group forecast the market to hit C$1.56 billion (US$1.2 billion).

As we head into 2020, there are fewer positive predictions about the cannabis sector making headlines. It’s not surprising.