The Bitcoin Halving: What Traders Need To Know

The Bitcoin Halving: What Traders Need To Know

It’s impossible to overstate the impact that coronavirus has wrought on global markets the year, from the fastest-ever bear market in US stocks, to the collapse in global bond yields, to the seemingly daily 20%+ moves in oil, to name just a few.

All the events that traders were expecting to drive markets as they flipped their calendars to 2020 have been put on the proverbial backburner as market participants digest the fallout of an unprecedented shutdown on global commerce, not to mention the accompanying record policy response. That said, next week brings an event that will reshape the cryptocurrency landscape for the next half decade and beyond: Bitcoin’s third “halving” of block rewards.

What is the Bitcoin Halving?

For the uninitiated, bitcoin is a decentralized digital currency that enables instant payments to anyone, with no central authority. The Bitcoin network is secured by miners that use specialized computers to verify each block of bitcoin transactions approximately every 10 minutes; the miner that verifies each block is rewarded for their work with newly-created bitcoins.

When Bitcoin was first created, this “block reward” was set at 50 bitcoins for each block, but that reward is cut in half every 210,000 blocks, or about every four years. According to bitcoin’s pseudonymous creator Satoshi Nakamoto, "total circulation will be 21,000,000 coins. It'll be distributed to network nodes when they make blocks, with the amount cut in half every 4 years." Bitcoin’s programmatically encoded monetary policy and supply cap set it apart from many other popular cryptoasset networks, including Ethereum.

After previous halvings in 2012 and 2016, the block reward is now scheduled to drop from 12.5 to 6.25 bitcoins per block on May 11 or 12, depending on how fast blocks are mined over the next week. To date, about 18.3 million bitcoins have been minted out of a total of 21 million that will ever be created. As you can imagine, the instantaneous -50% reduction in compensation for miners securing the bitcoin network will have a major impact on the entire cryptoasset industry.

As it has throughout most of its history, bitcoin has thrived in the wake of its previous two halving events (though we’d be remiss not to remind readers that past performance is not necessarily indicative of future returns!). From a purely supply and demand perspective, a bullish reaction to supply cuts makes sense; after all, at current prices, the amount of newly-created bitcoin each day (which is usually sold into the market by miners) will drop from $16M to closer to $8M. In this way, it’s not surprising that the previous two bitcoin halvings kicked off huge rallies of 10,000% and 2,500% respectively: 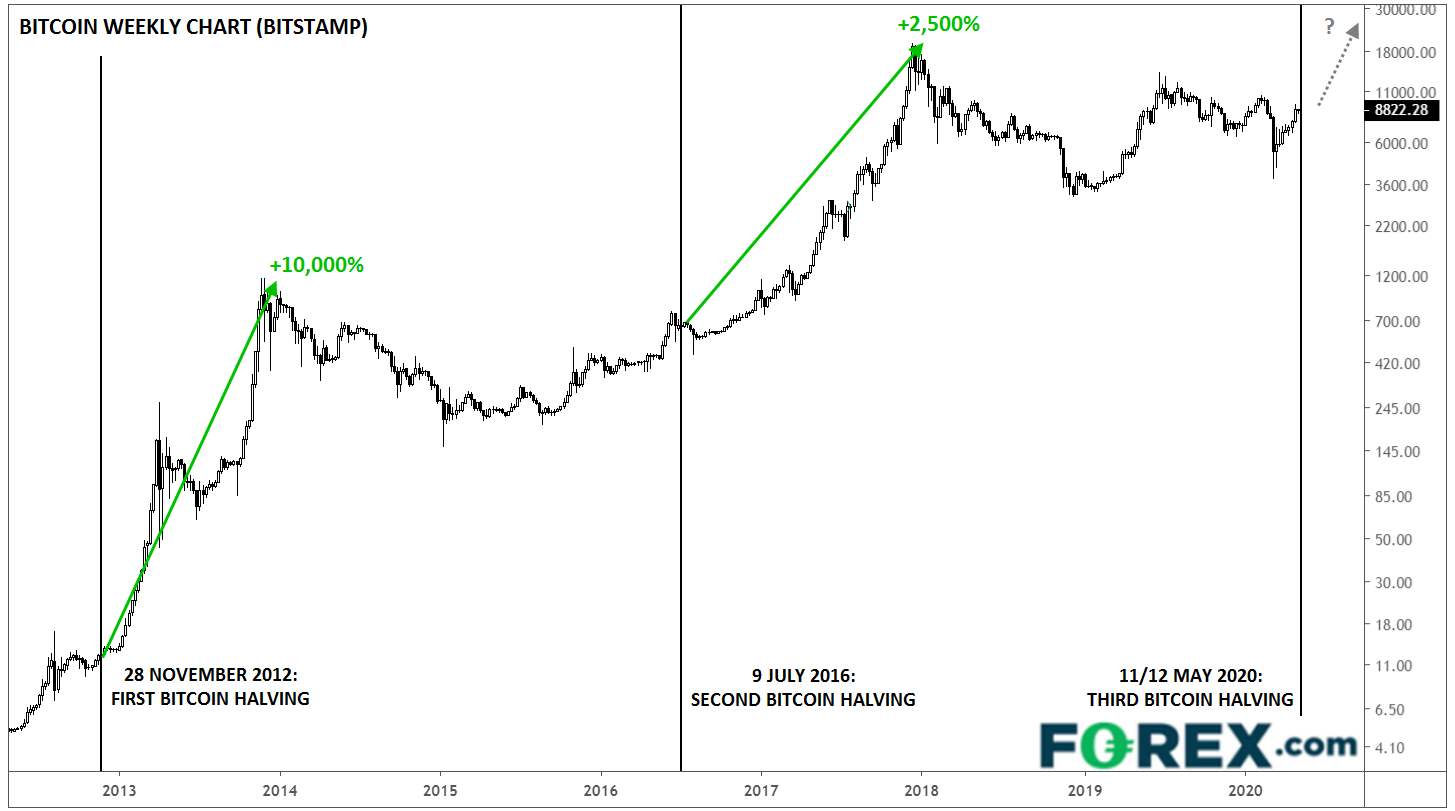 This declining supply dynamic supports the increasingly popular “stock-to-flow” (S2F) valuation model. Perhaps the most basic of the valuation methods, the S2F model treats Bitcoin like other “store of value” commodities like gold, silver, and platinum, whose value comes from their relative scarcity. By comparing the current supply against the flow of new supply added each year, we can get an objective measure of how “hard” and scarce different assets are, and by extension, a potential target price:

While the S2F model has proven to be fairly accurate to date, it does give potentially overly bullish valuation projections, such as a single Bitcoin being “worth” about $1,000,000 in about five years, at which point Bitcoin alone would be worth about half of the current value of the US stock market, the world’s largest!

Will Bitcoin Surge Around Next Week’s Halving as Well?

As experienced traders have learned, market movements are never as clear and predictable as they appear in hindsight. From an efficient market perspective, any fundamental reaction to the halving should be heavily “priced in” at this point; after all, it’s hard to imagine a more predictable event than an unalterable supply reduction that has been scheduled for more than a decade (and remains scheduled in the future for more than a century) in a liquid, heavily traded, $150B+ market cap asset. Note that bitcoin’s market capitalization is more than 15 times larger than it was at the last halving, and much of that market cap from rapid growth from more “sophisticated” institutional investors.

That said, the retail contingent of Bitcoin traders remains a significant contributor to price movements, and they could still have a bullish impact on the price in the coming weeks. A quick look at Google (NASDAQ:GOOGL) search trend data shows that searches for “bitcoin halving” in the US are already dwarfing the retail interest around the 2016 halving, and this interest is likely to grow further over the next week:

Frankly, it doesn’t take a CFA charter or a Bloomberg terminal to identify the sharp difference between the recent monetary policy of traditional central banks and Bitcoin. Over the last 12 weeks alone, the Federal Reserve has seen its balance sheet rise by more than $2.5T, or +60%, whereas Bitcoin will see its unalterable annual rate of issuance decline from +3.6% to +1.8% per year after the halving. For this reason, we could see a sentiment-driven rally in bitcoin heading into and immediately after the halving, though there’s also a risk of a “buy the rumor, sell the news” reaction if institutional investors look to take advantage of a rallying price by taking profits on accumulated positions.

Regardless of the short-term movements, bitcoin may continue to benefit from the broader macroeconomic backdrop. As Jefferies’ Global Head of Equity Strategy noted last week, “bitcoin should be a source of diversification in a portfolio, as is gold, precisely because of its truly decentralised nature. It is this feature, combined with the fixed supply, which makes it a hedge against central bank manipulated fiat money."

Time will tell if bitcoin is ultimately able to become the “store of value” and “medium of exchange” that Nakamoto imagined more than a decade ago, but there’s no doubt that next week’s halving will draw plenty of attention to cryptoasset market, presenting opportunities for nimble traders.