The American market, trying to solve the medium-term equation

The American market, trying to solve the medium-term equation

The evolution of financial markets hasn't been directly related to the real economy in recent times. To realize this, it is enough to analyse some of the results that most companies have presented during their last quarters and compare them with their performance on the market. If we prefer a more simplistic scope, it is enough to compare the evolution of certain economies to their main indices. The market behaviour compared to the financial results, at least in this context, is no longer useful.

The measures proposed by the central banks have managed to sustain the majority of markets over this very complex time for the productive economy. This fact, has led us to observe large bearish movements on markets while the socio-economic environments don't show that reality at all.

Nothing new, so far. However, we are currently facing the situation where, focusing on a technical level, some of the most important indices such as the S&P500 or the NASDAQ Composite, have been showing signals through their oscillators that lead us to act with great caution when it comes to make medium-term decisions. These signals appeared in the form of bearish divergences in both RSI and MACD indicators some time ago. The divergences themselves, as you know, do not have to turn directly into bearish movements, however once you are there it is advisable, at least, keep an eye on this possibility.

We can see a similar behaviour on both indices; 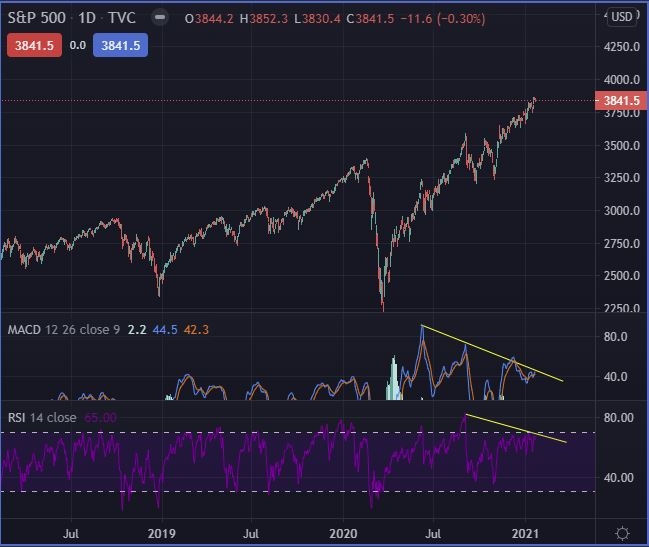 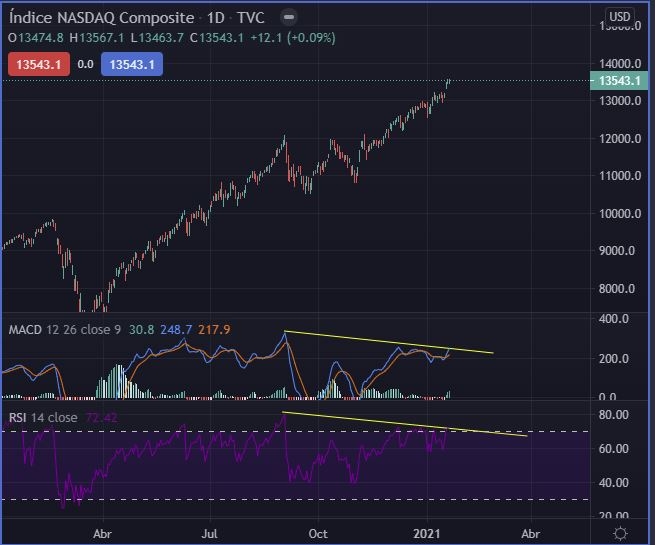 What conclusions can we get from here?

First of all, it is convenient to review at a general level some quotes of the most representative companies of these indices. For this reflection we will use Apple (NASDAQ:AAPL), Microsoft (NASDAQ:MSFT) or Amazon (NASDAQ:AMZN), although this behaviour is broad and not exclusive to companies in the technology sector.

Most of these companies are showing technical structures where we can see digestions or consolidations to the more or less aggressive bullish trends they faced during 2020. As we say in the title of the post, these consolidations are about to end in their "technical" aspect and present structures in which medium-term technical objectives can be determined. This fact, added to the weighting these companies have in the American indices, leads us to conclude that we could be close to see important movements.

If the market suffers falls in the short term, whether they are strong or not, it will depend to a large extent on the conclusions from these ranges that the mentioned companies are doing. Let's go to see how they look like: 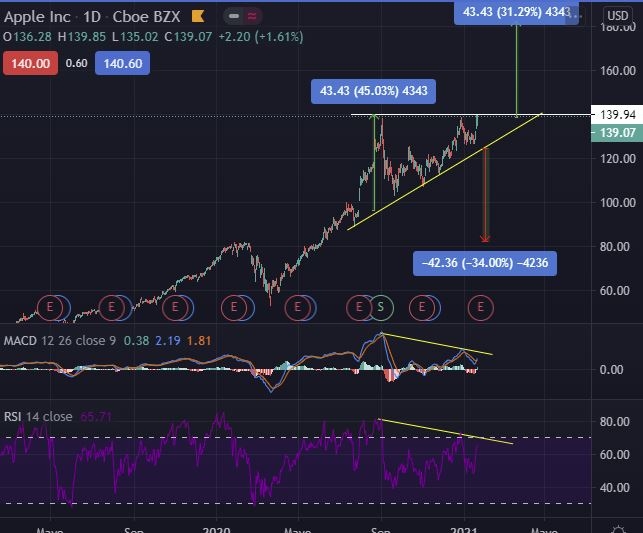 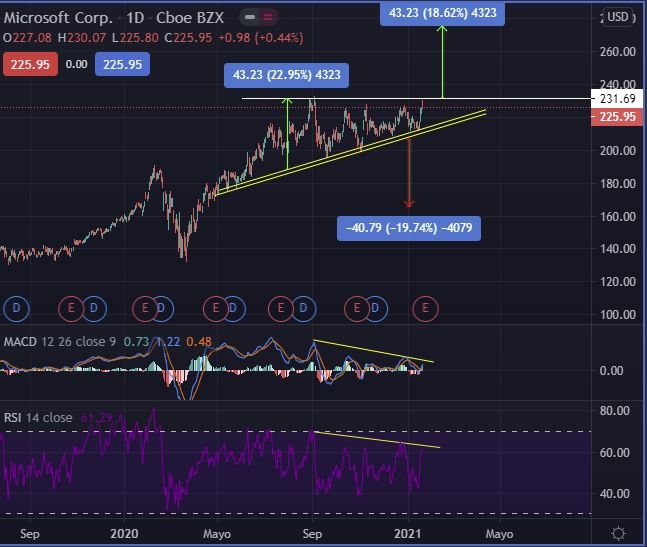 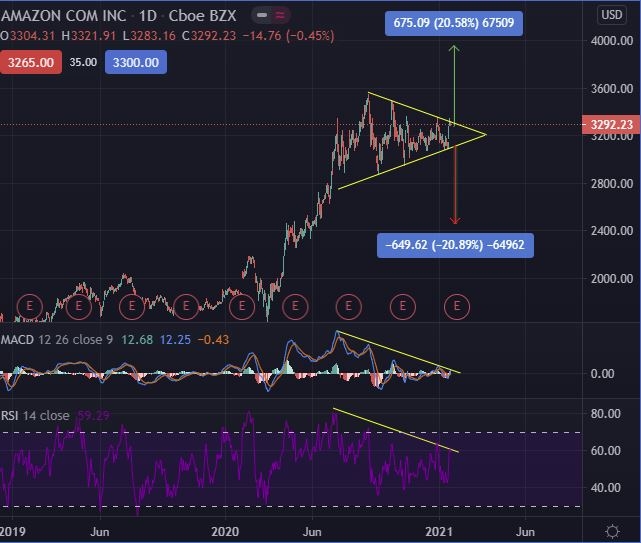 Finally we find Amazon, making a symmetrical triangle whose theoretical technical objectives are set out in the graph.

From here, what to take into account? What could happen?

I sincerely believe that in the short term, the movement of the indices will take place in the direction of the breakouts of the lateral consolidations. Not so much because of the weighting in the indices of these companies, something obvious and mathematical, but because of the market sentiments that their movements are capable of generating. If these breakouts occur in a bullish direction as we might think, it is possible to see new general market movements towards new highs. If not, and those ranges break down, the divergences can materialise and lead to more serious corrections. I consider it is really important not to forget again the complex context in which we find ourselves and, as always, to apply the principle of caution. In my opinion, this is the main fact to watch in the short term.

And in the medium term?

From my point of view, and I think from anyone's point of view, two main scenarios would arise. Both related to the pandemic and its socio-political-economic implication. On the one hand, there is the possibility that the pandemic continues the path that we are unfortunately seeing, with its respective lockdowns, closures, etc., and specially important the lives behind the numbers. This fact would lead us to the continuation of a market in which anything could happen due to uncertainty and a short-term monitoring would be the fundamental strategy to follow.

On the other hand, if a closer recovery begins (March-April), we would enter another scenario that will require a specific analysis. When we talk about recovery, at least in UK/Europe we mainly refer to that of the service sector (around 70% GDP), much more deteriorated at the level of figures than the industrial productive sector according to data from the ECB or BoE.
Due to the injections of liquidity derived from the measures offered by central banks to support the economy, it would not be surprising if they ended up producing an inflationary environment. If it occurs, a second analysis would be convenient where we would have to take into account the importance of certain assets in inflationary periods.

Due to this reflection and as I have commented on other occasions, my opinion in this regard continues to be sailing in favour of the current trend, but always taking into account the background context in which we move and applying the principle of caution.