In results that the CEO of Pfizer (NYSE:PFE) hailed as a “great day for science and humanity,” the company announced that its COVID-19 vaccine was found to be more than 90% effective in Phase 3 trials. This efficacy exceeds most scientists wildest dreams; previously NIH Director Anthony Fauci had said that a 50-60% effective vaccine would be “acceptable” and most scientists were hoping for something in the 70% range. The study included over 43,000 participants.

Moving forward, Pfizer and vaccine co-creator BioNTech (NASDAQ:BNTX) have indicated that they plan to apply for emergency use authorization from the US FDA in two weeks’ time. Assuming no setbacks, the firms expect to produce 50 million doses of the vaccine in 2020 and 1.3 billion doses in 2021, raising hopes of a potential “return to normal” in the middle of next year for much of the developed world.

Combined with the resolution of the US election this weekend, traders have multiple reasons for optimism as the week kicks off. That said, the market moves aren’t necessarily a one-way street. While futures on the more “old world” S&P 500 and Dow Jones Industrial Average indices are surging 4-5% ahead of the open, the technology-heavy Nasdaq is actually poised to open marginally lower on the day. Many of the massive technology behemoths (think Apple (NASDAQ:AAPL), Amazon (NASDAQ:AMZN), Facebook (NASDAQ:FB), Netflix (NASDAQ:NFLX), Alphabet/Google, and Microsoft (NASDAQ:MSFT)) as well as smaller stay-at-home centric rivals (Zoom Video, Fastly, Peloton (NASDAQ:PTON), Shopify, Nvidia, etc) will now face a much tougher competitive landscape sooner than expected. To wit, futures on the small-cap focused Russell 2000 index are trading “limit up” (+7%), meaning that the index can’t advance further until markets officially open. 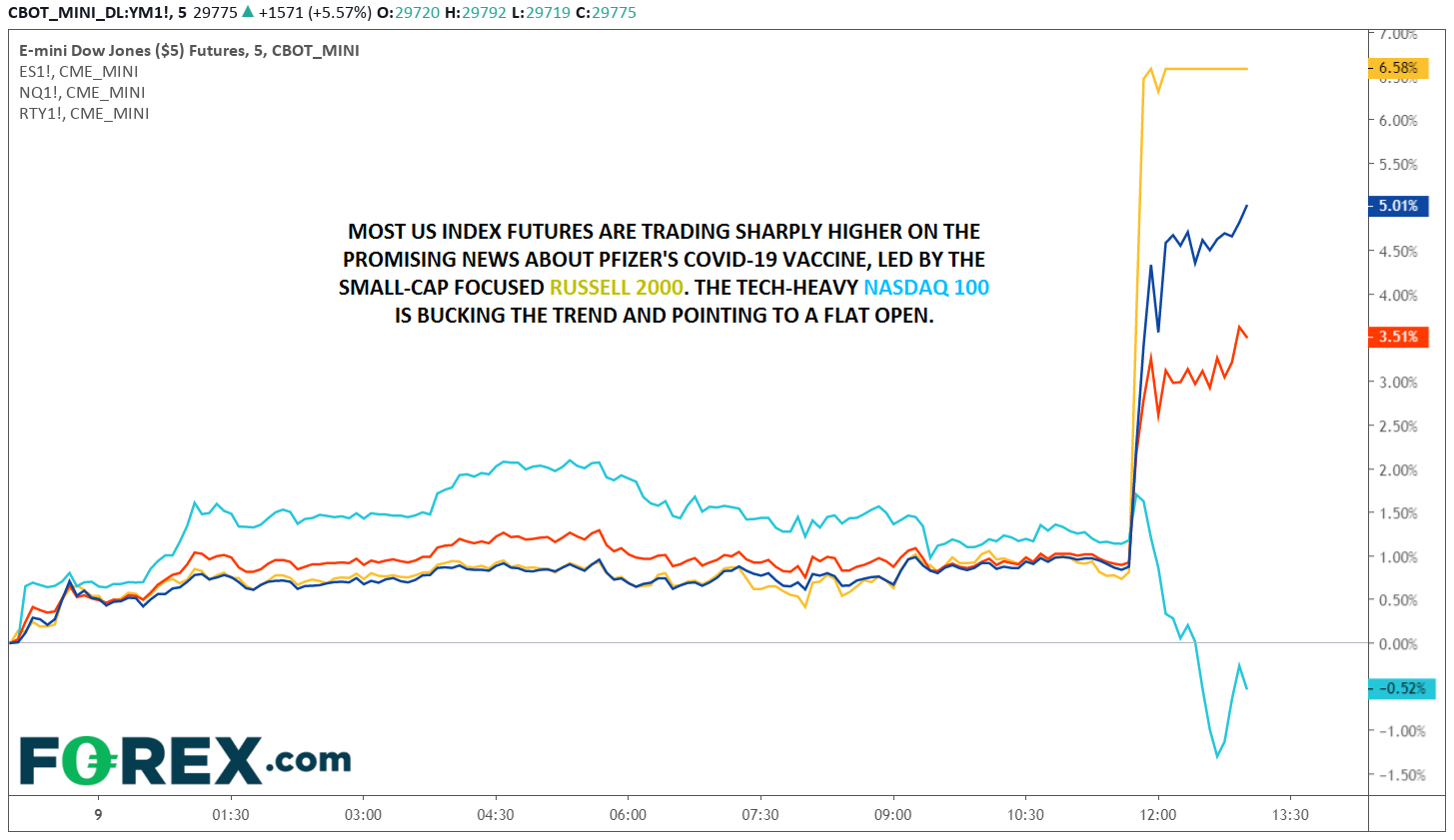 Outside of equities, the reaction is a bit more intuitive. In the FX market, growth-sensitive currencies like the “commodity dollars” (AUD, NZD, and CAD) are surging along with emerging market currencies, while traditional safe havens like the JPY, CHF, and USD are lagging. Likewise, gold is trading down by nearly 4% while WTI crude oil is up by nearly 10%(!). Finally, the yield on the benchmark 10-year US Treasury bond is trading up 11bps to 0.92%, signalling optimism and risk appetite across the globe.

While the hard-working scientists at Pfizer and BioNTech are still putting the finishing touches on their research, traders are buying first and asking questions later. In the words of Pfizer CEO Albert Bourla, “We can see the light at the end of the [COVID-19 pandemic] tunnel”, and not a moment too soon with global infection rates setting new records, hospitals nearing capacity, and economies struggling to reopen.