FactSet data shows analysts anticipate Q4 S&P 500 earnings will dive by 2.0% when compared to the same period last year, capping off another year of lackluster results. If confirmed, this will be the first time the index has posted four consecutive quarters of year-over-year declines in earnings since Q3 2015 through Q2 2016.

Six sectors are projected to announce a Y-o-Y deceleration in earnings, led by the Energy, Consumer Discretionary, and Materials sectors. On the other hand, five are predicted to publish annualized earnings growth, led by the Utilities and Financials sectors. 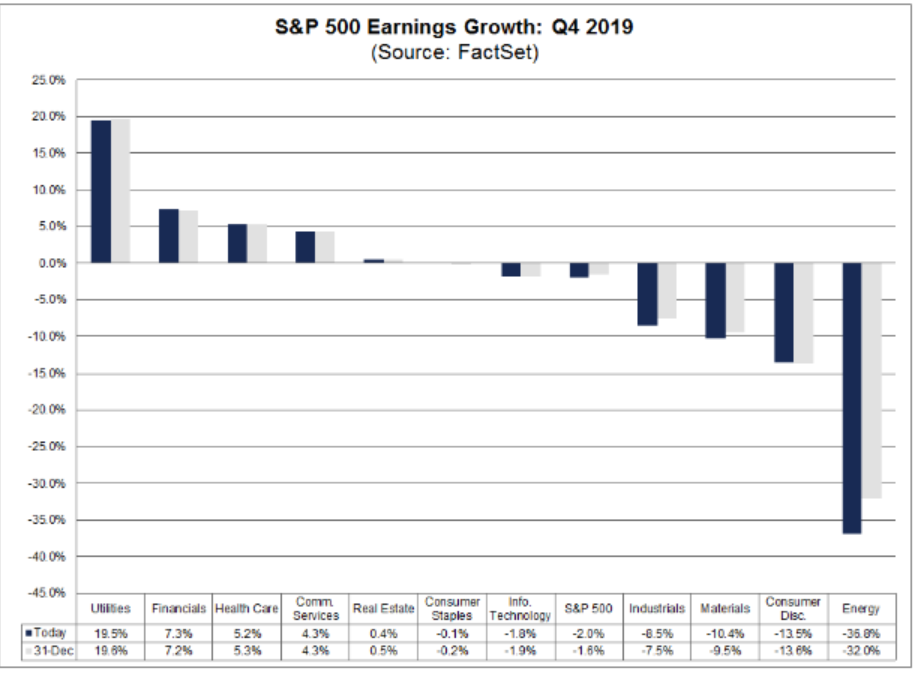 Revenue expectations are equally unsettling. The predicted Q4 2019 Y-o-Y rate is just 2.6%, which would be the lowest rate of income growth for the index since Q2 2016.

Of the eleven sectors, three are forecast to report a drop in revenue Y-o-Y, led once again by the Materials and Energy sectors. Meanwhile, eight sectors are to show increases, with Health Care, Utilities, and Communication Services leading. 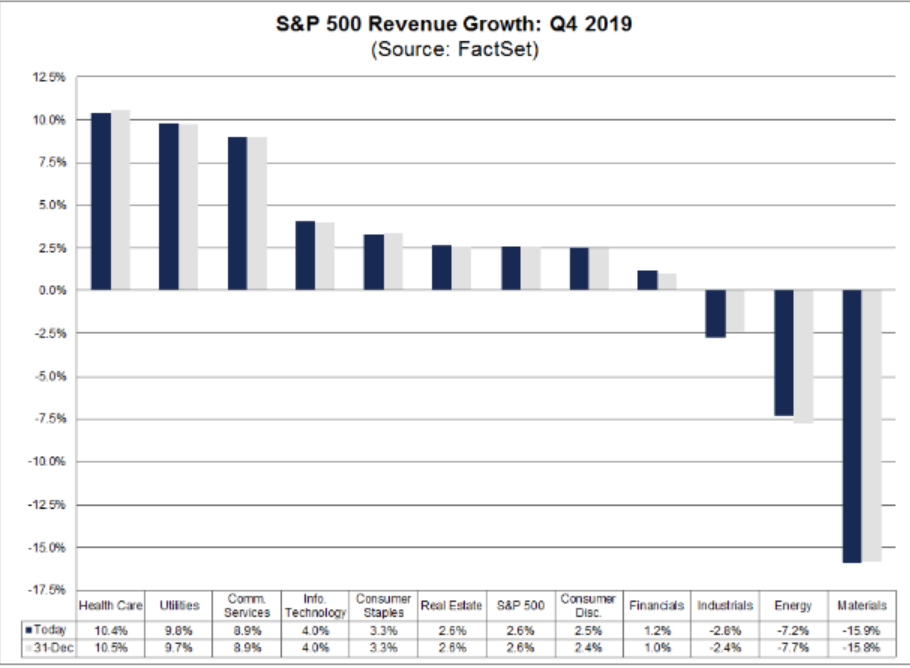 The Energy sector is forecast to print the highest Y-o-Y earnings losses of all eleven sectors, with a massive 36.8% fall in fourth-quarter EPS from a year earlier, according to FactSet. With low crude oil and gas prices burdening on the sector, it is expected to suffer the second-largest Y-o-Y plunge in revenue, at -7.2%.

Digging deeper, earnings from four of the six sub-industries are foreseen to decline more than 20%. Stocks in the Oil & Gas Drilling group are to fare the worst, with EPS estimated to plunge a staggering 75%. Earnings from Oil & Gas Refining & Marketing, and Integrated Oil & Gas companies are projected to plummet -51% and -46%.

The Consumer Discretionary sector is expected to report the second-highest Y-o-Y earnings decline of all eleven sectors, at a dismal -13.5%. Eight of the eleven sub-industries in the sector are forecast to post waning earnings, with four of those on track to suffer double-digit losses, led by auto stocks, which are to see their collective EPS nosedive 69% from a year ago.

Meanwhile, Amazon (NASDAQ:AMZN) is estimated to report the third-largest earnings reduction in the sector, with a mean Q4 EPS estimate of $4.05, compared to EPS of $6.04 in the same period a year earlier. The company's plan to continue spending on upgrading Amazon Prime's free one-day shipping is a major driver for this potential downswing.

Look For Robust Results From This Sector

1. Utilities: All Sub-Industries To Report Growth

The Utilities sector could enjoy tailwinds from the Federal Reserve’s easy monetary policy, as it is expected to report the highest Y-o-Y earnings growth of all eleven sectors, with EPS to rise 19.5% compared to the year ago period.

All five of the sub-industries in the sector are anticipated to report EPS growth, with double-digit earnings growth from four: Independent Power and Renewable Electricity Producers (+138%), Multi-Utilities (+26%), Electric Utilities (+12%), and Gas Utilities (+12%).

Analysts name Utilities as the sector likely to report the second highest Y-o-Y revenue growth, at +9.8%. Three of the five sub-industries in the group are to list double-digit increases in revenues: Independent Power and Renewable Electricity Producers (+60%), Multi-Utilities (+16%), and Electric Utilities (+11%)

The Utilities Select Sector SPDR Fund (NYSE:XLU), is trading near all-time highs as the sector’s main ETF tends to outperform in low interest rate environments due to their attractive dividend yield. The ETF is up 18% over the past 12 months.

At a company level, Dominion Energy (NYSE:D) and American Electric Power (NYSE:AEP) are two to watch. Dominion's revenue forecast is $4.81 billion, an increase of 43% compared to sales of $3.36 billion a year ago, while AEP is expecting to report revenue of $4.03 billion, beating last year's $3.8 billion reading.