The story from corporate America during the just-concluded third quarter of 2020 was not much different from what we saw in Q2. However, there was a little, encouraging twist.

Executives at some of the U.S. companies hardest-hit by the pandemic were more hopeful about the future as they saw the economic recovery taking hold. Measured by their success in beating expectations they set for themselves, about 84% posted earnings per share that beat estimates. The performance was the best since FactSet started tracking the metric in 2008.

While stay-at-home winners—big-tech companies and retailers—continued their winning streaks, some of the biggest losers during the pandemic also showed some signs of a recovery.

Let’s first focus on the two U.S. iconic brands whose earnings were adversely affected by the pandemic as COVID-19 forced consumers to cut their restaurant trips and the government lockdowns shuttered theme parks—Starbucks Corporation (NASDAQ:SBUX) and Walt Disney Company (NYSE:DIS). When each reported their Q3 earnings, both surprised the markets with better-than-expected showing, signalling that the worst is probably behind them.

The coffee giant reported global same-store sales that were down 9% in the period that ended in September, but that performance was better than the 11.9% drop analysts were expecting. Although that marks the third straight quarter of overall declines, the size of the drops have abated since the spring, when much of the world was on lockdown. In the U.S., comparable sales fell 9%, beating expectations. 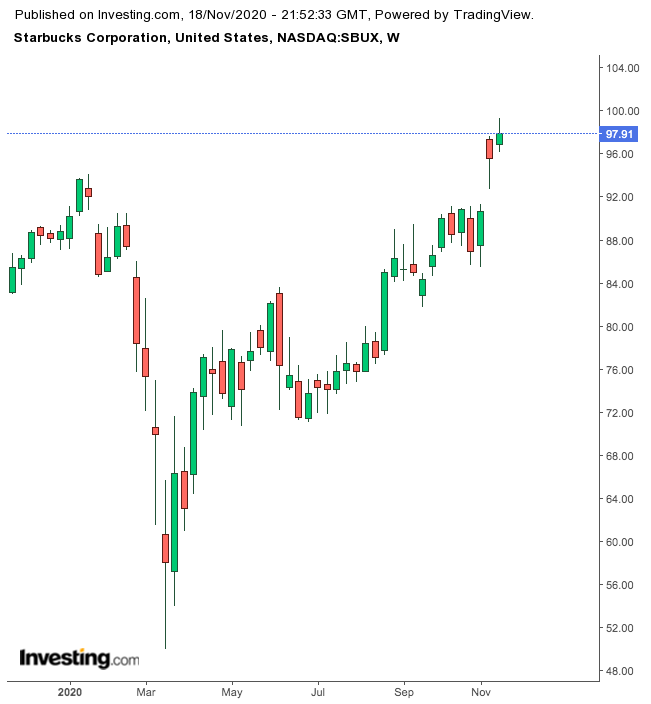 Disney, which is suffering unprecedented losses, showed that the quarantine has accelerated a shift to its streaming business at a time when its movie theaters and theme parks remain deserted, and its TV production stalled. Disney had about 74 million subscribers for its streaming video app, Disney+ as of Oct. 3, up from more than 60 million reported in August.

“The real bright spot has been our direct-to-consumer business,” said Disney chief executive Bob Chapek in a Wall Street Journal report, referring to the division that includes the company’s streaming operations.

Investors, on the other hand, look quite optimistic about the post-pandemic recovery, sending Disney stock to its pre-pandemic level. Shares closed Wednesday at $143.90, down 0.42% on the day. 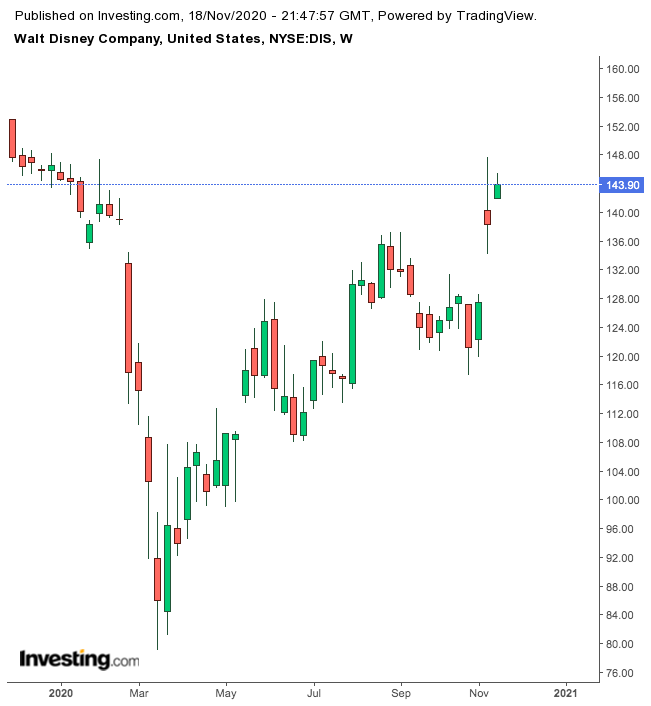 During the past quarter, tech giants continued to reap the benefits of their unique position during the pandemic, which fuelled demand for everything from online retail and social media to cloud-computing services and digital advertising.

Amazon.com (NASDAQ:AMZN), Alphabet (NASDAQ:GOOGL) and Facebook (NASDAQ:FB) all reported strong quarterly sales and profits. Amazon, which had delivered record sales in the second quarter of the year, again exceeded expectations as revenues soared 37% and profit nearly tripled, propelled by strong online sales as well as digital advertising and growth in its lucrative cloud-computing arm.

Google’s parent company also reported a rebound in its digital advertising segment after some weakness during the first two quarters of the year.

The latest quarter’s earnings were not that encouraging for Apple (NASDAQ:AAPL), whose profit dropped after the world’s most valuable company delayed the launch of its new flagship iPhone because of the pandemic.

Together, the five biggest tech companies by value—Apple, Amazon, Alphabet, Facebook and Microsoft (NASDAQ:MSFT)— posted sales 18% higher in the latest quarter than a year earlier.

The underlying strength of Q3 earnings season explains why stocks have rebounded so strongly from the pandemic-driven slump and why investors are optimistic about the future outlook even though valuations remain extremely rich.