Powell Vs. RBNZ: Which Will Surprise More?

Powell Vs. RBNZ: Which Will Surprise More?

The best way to summarize President Trump’s speech to the N.Y. Economics Club is that it could have been a lot worse for the markets. He threatened a significant increase in tariffs on China if there’s no deal but at the end of the day, nothing new was revealed. President Trump made no mention on how U.S.-China trade talks are going and said nothing about rolling back tariffs. He also did not drop any hints about his decision on EU auto tariffs – market participants were hoping for a delay but an announcement was not made. Reading between the lines, we have every reason to believe that progress in U.S.-China trade talks have been limited. Trump also described the EU as “in many ways is worse than China,” which explains why euro remained under pressure and USD/JPY dropped below 109.00 after his speech. The decision on auto tariffs are still expected to be delayed but that announcement could happen this week or next.

Looking ahead, there are some big events on the calendar in the next 24 hours that could drive up volatility in currencies the most important of which will be Fed Chairman Powell’s Congressional testimony and the Reserve Bank of New Zealand’s monetary policy announcement. The only question is which event will have the larger surprise. The market has a good sense of the Fed's and RBNZ’s bias but action and guidance are key.

Starting with RBNZ because that will be hours before Powell’s testimony, the market is pricing in a 76% chance of a quarter-point rate cut. The NZD verticalized on Monday after the RBNZ shadow board recommended no change in rates but kiwi u-turned in Asia after inflation expectations for the fourth quarter dropped to its lowest level in 3 years. Board members feel that there’s insufficient evidence to justify further easing and “the previous cut had the effect of reducing economic confidence.” Yet, according to the table below that highlights changes in New Zealand’s economy between policy announcements, there’s been more weakness than strength. Aside from low inflation, consumer demand is softening, labor growth is weakening and economic activity is muted. The only clear improvements were in housing and market indicators. Based on these reports alone, the economy could use more stimulus. It has been 5 months since their last move, which was a surprisingly large 50bp cut and considering that this is their last policy meeting of the year, its also their last real opportunity to ease until they meet again in February. For all of these reasons, we believe there’s a good chance the RBNZ will cut 25bp, bringing New Zealand rates to Australia’s levels.

An hour after the rate decision, Governor Orr will hold a press conference where the focus will be on what comes next. If the RBNZ leaves rates unchanged but Orr suggests that they could ease early next year or there’s room for a mid-meeting cut, we’ll see an initial rally in NZD/USD that could take the pair as high as .6370 followed by a sell-off toward 63 cents. If the RBNZ cuts 25bp and Orr leaves the door open to additional easing, we’ll see the pair below that level. However if the central bank eases but suggests that they are done, a long-term bottom could be set in NZD. 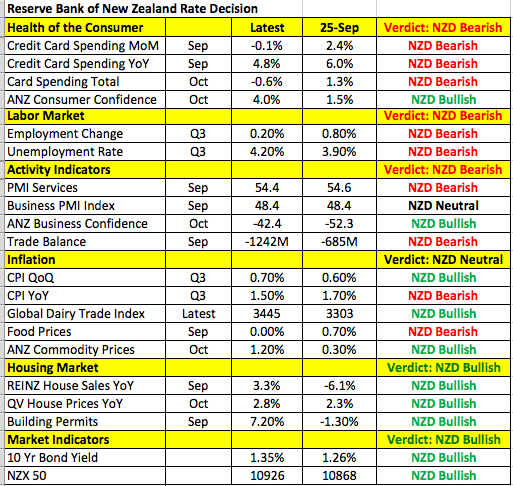 With the Dow Jones Industrial Average at a record high, Fed Chairman Jerome Powell is widely expected to maintain his glass-half-full view of the economy. At the policy meeting the central bank cut rates and he made it clear that this was only insurance against the risks of softer global growth. Not much changed since then outside of the push higher in stocks. Growth is muted and trade is still a question mark. As such, we expect Powell to describe the labor market as strong and say that he expects the economy to continue to grow at a moderate rate. He’ll also imply that no further easing is likely as “monetary policy is in a good place.” Rate hikes are also not on the horizon and the performance of the dollar will depend on whether the stronger message is no more rate cuts or low rates for long. Between Powell and RBNZ, the Fed Chair’s speech should have a greater impact on currencies but the Reserve Bank, whose plans are unclear, could deliver the larger surprise. Aside from these 2 events, U.S., UK and Germany’s consumer price reports are scheduled for release. Higher inflationary pressures are expected in the U.S. given the rise in oil prices.