US contracts for the S&P 500, Dow Jones, Russell 2000 and NASDAQ, along with European equities extended a rally on Wednesday, as markets ignored simmering tensions between the world's two largest economies and instead focused on the reopening of global economies and growing expectations of additional stimulus.

Yields declined as investors shifted into risk assets and oil slipped below $34 at the time of writing.

Futures for all four major US indices were in the green, this morning, each at least +0.7% higher and as much as 2.8% for the Russell 2000, though they were fluctuating, at the time of writing. 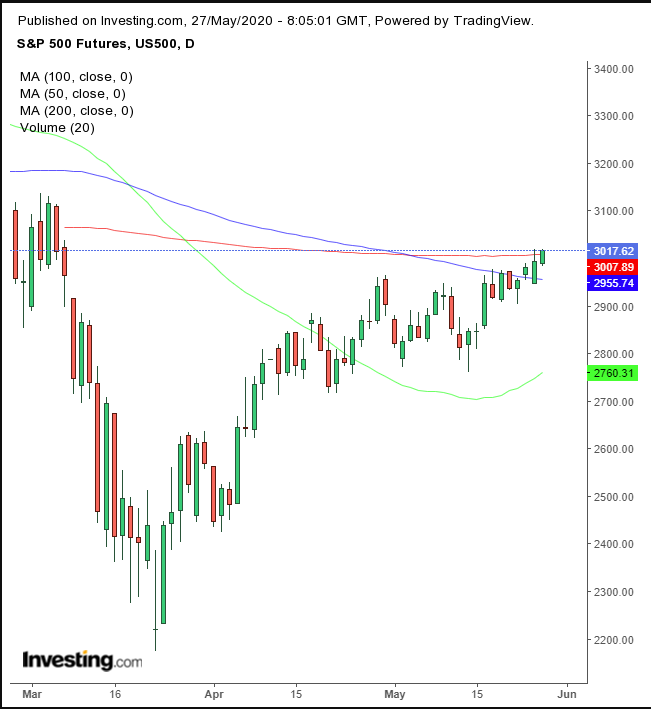 Contracts on the SPX struggled above the 200 DMA, for a second day. Dow contracts stopped below the 100 DMA. NASDAQ futures jumped above the 100 DMA, after failing to do so yesterday.

The Stoxx Europe 600 Index opened higher on elevated volume, to the highest level since March 9, as investors eyed the EU recovery plan. The European Commission proposal would recreate growth for Union nations, with grants, loans and guarantees of more than 1 trillion euros.

Asian indices were muted earlier today, as fresh political unrest in Hong Kong added to regional market headwinds, which could include a path to an outright cold war between China and the United States. The Chinese yuan weakened to within 0.3% of its all-time low since September 2019, then the height of the Sino-US trade spat. Considering that accusations by Washington of Beijing's currency manipulation is one of the core issues, this may serve to spread additional salt on the wound.

Japan’s Nikkei 225 bucked the trend, (+0.7%), just a day after the world’s third-largest economy was restarted. The financial sector led the advance thanks to a short squeeze.

Yields, including for the US 10-year Treasury note, declined as more money was routed into stocks. 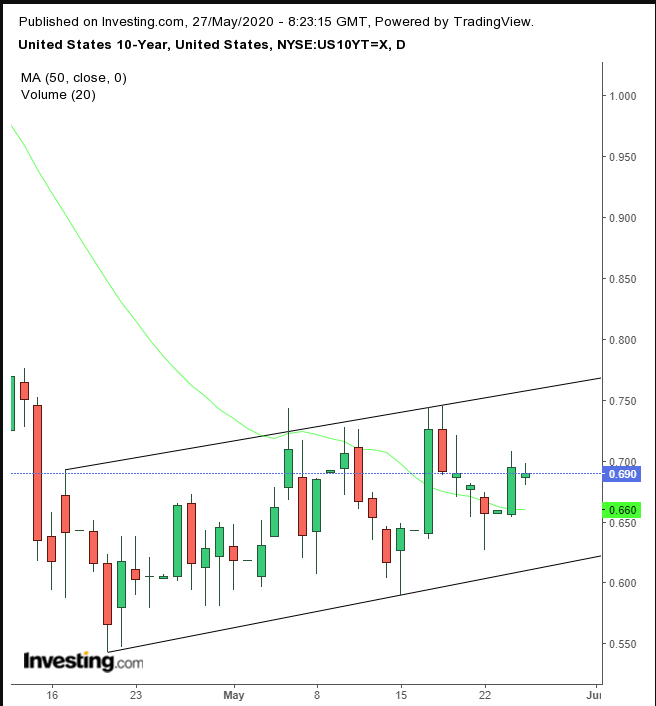 From a technical perspective, rates have been ascending within a band since the April 21 low and are now above the 50 DMA for a second day.

An ongoing equity rally generally weighs on safe havens, including the Japanese yen. 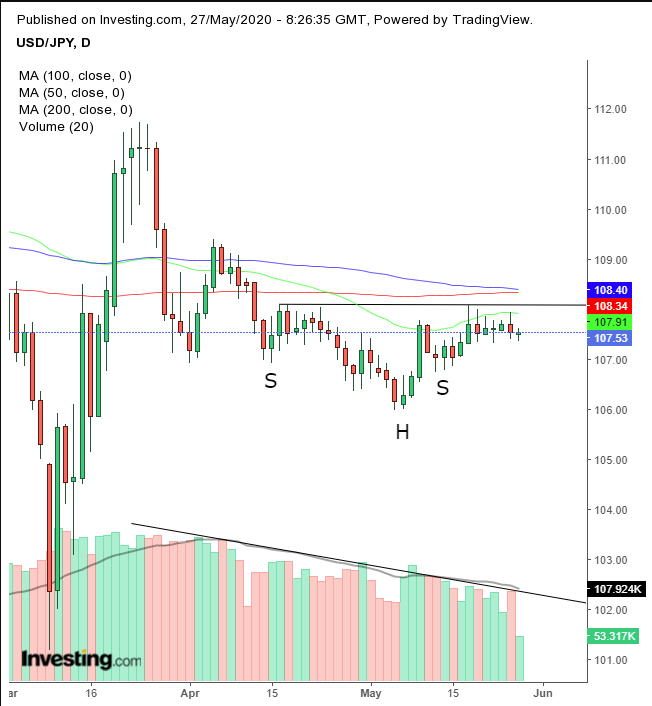 The USD/JPY is completing a possible small, H&S bottom. Note, the diminishing volume for the pair. A close above the neckline which would include climbing above the major MAs would provide a reason to be bullish.

Gold is testing the neckline of an H&S continuation as well as the symmetrical triangle that followed and, finally, the falling flag. 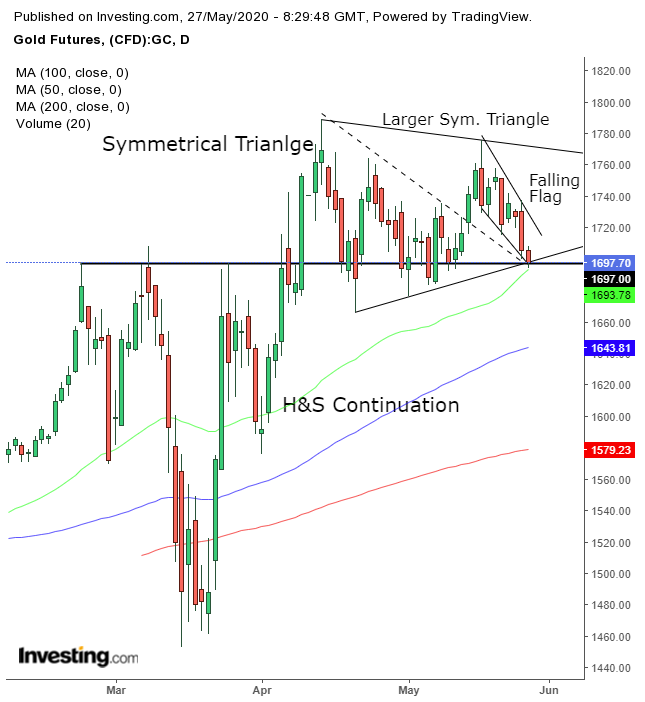 Should this key level hold, the precious metal would be developing yet a fourth bullish pattern, a larger symmetrical triangle.

Oil slipped below $34, after being unable to conquer the $35 mark for a fifth session. 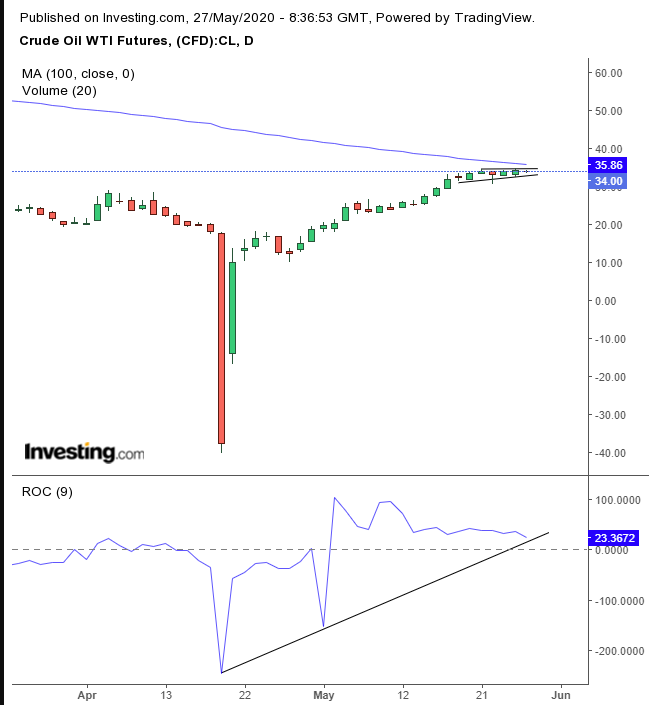 Technically, the price of crude is depressed below the 100 DMA and losing momentum. It seems the real economy is catching up with the commodity's price, after it soared from negative territory and well beyond, ahead of reopening economies. The price may develop a bullish pennant, but it would be prudent to wait for confirmation of an upside breakout before getting too excited.

There are too many fundamental triggers clouding the picture as to what will happen next, and, more importantly, when. 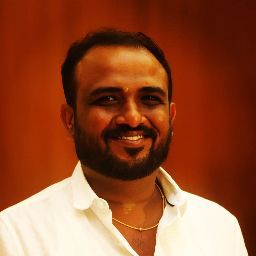 it seems Market will Fall In upcoming Days  ... (Read More)