US futures, including for the Dow, S&P, NASDAQ and Russell 2000, were all trading higher, as were European shares on Wednesday, on continued optimism there's light at the end of the COVID-19 tunnel because of the potential vaccine. Contracts on the NASDAQ are bucking the global rotation out of technology and into cyclical industries.

Yields continue to rise as investors sell Treasuries in favor of equities and the dollar continues to climb.

While all four major contracts are at least 0.5% in the green, futures on the Russell 2000 are trailing and the NASDAQ is outperforming.

This is noteworthy as technology shares have slumped since Pfizer (NYSE:PFE) announced on Monday that its potential COVID-19 vaccine was 90% successful in clinical trials. The news saw shares in industrials, including airlines and travel stocks, soar as the market hoped that an end to the global pandemic was in sight.

A vaccine could allow life to return to normal, the stay-at-home era to come to a close and thus economic growth to resume. This triggered the rotation out of the tech sector that had benefited from most of the globe working from home. But now investors may be seeing some renewed value in tech shares after a two-day slump. Or markets are realizing it will take some time for the roll-out and distribution of any successful vaccine before there can be a mass return to offices.

In Europe, the Stoxx 600 index added 0.6% Wednesday morning, extending last week’s 5% advance, with banks and travel-related stocks providing the best performance, after lagging for the year. European technology stocks on the STOXX 600 Tech Index were also in positive territory, up 0.6%.

Stocks fell Tuesday during the New York session, on the narrative that this month’s gains may be exaggerated while COVID cases continue to climb, particularly in the US where the number of daily deaths surged to the highest since August.

The S&P 500 Index (-0.14%) backed away from a two-month high, as the tech selloff overwhelmed advances in energy and industrial firms. The NASDAQ 100 plunged as much as 1.7%. In particular, Amazon (NASDAQ:AMZN) fell 3.4%, as it was hit with an antitrust complaint from the EU, and competitor Alibaba (NYSE:BABA) crashed 8.25% over stricter Chinese government scrutiny.

On the other hand, the Dow Jones Industrial Average (+0.9%) gained, with Boeing (NYSE:BA) extending its November rally to over 30% on a report that regulators could lift the grounding restrictions on its 737 MAX as early as next week. The Russell 2000 (+1.7%) outperformed, climbing to its highest level since August 2018.

Despite the market narrative of a rotation out of technology stocks, and all the sensible reasons why this should be the case, the NASDAQ Composite has been trading along an Ascending Triangle. 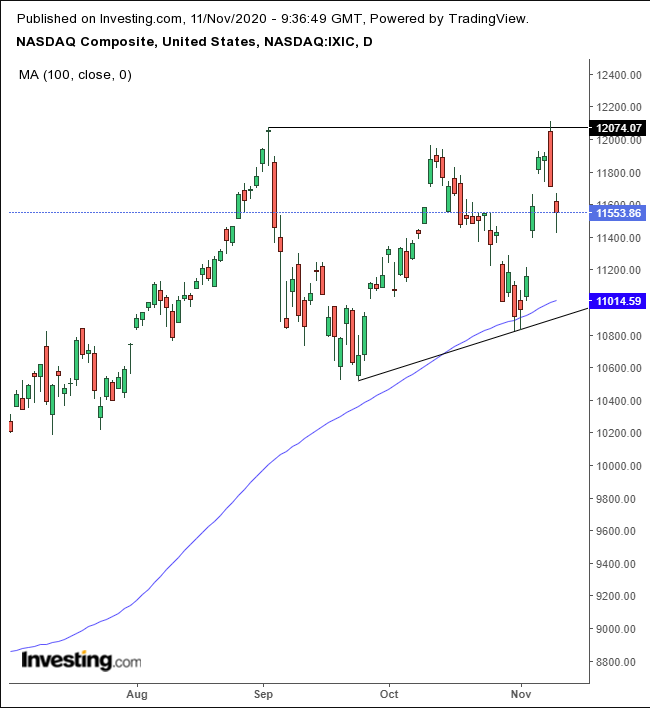 This pattern develops as buyers increase their demand, while sellers remain in place, leading to an upside breakout, signaling a resumption of the underlying uptrend.

Yields, including for the 10-year Treasury, climbed for the fourth session, retesting Tuesday’s highs, as investors dumped Treasuries in favor of stocks. 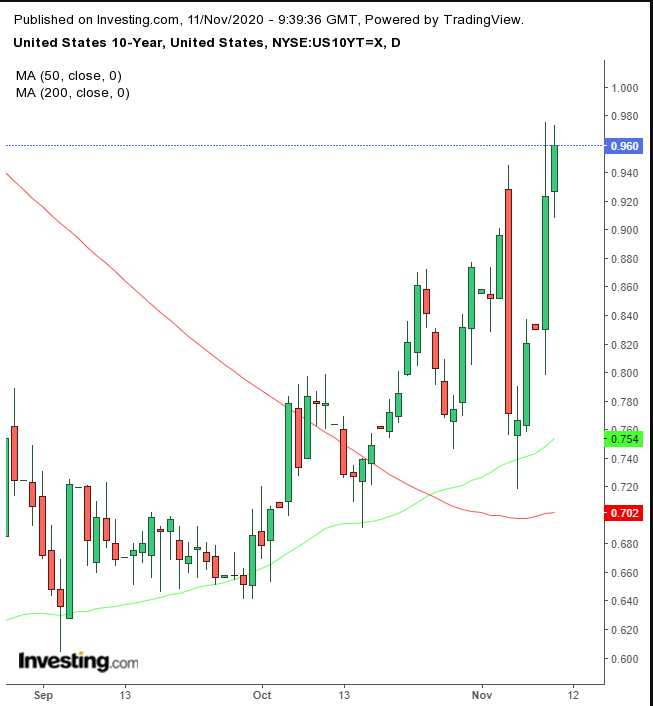 Rates reached the highest level since February 2019. Recently, the 50 DMA crossed over the 200 DMA triggering a Golden Cross. 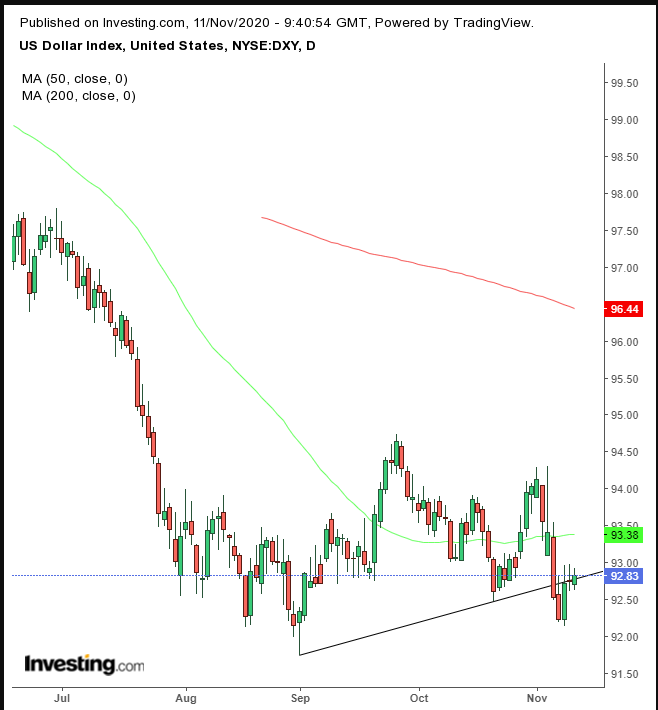 But the greenback remained right on the neckline of a H&S continuation pattern—bearish within the downtrend—for the fifth day.

Gold edged higher, despite the dual headwinds of a stronger dollar and accelerating equities. The yellow metal posted its biggest drop in 7 years on the surprising news of a potential vaccine. 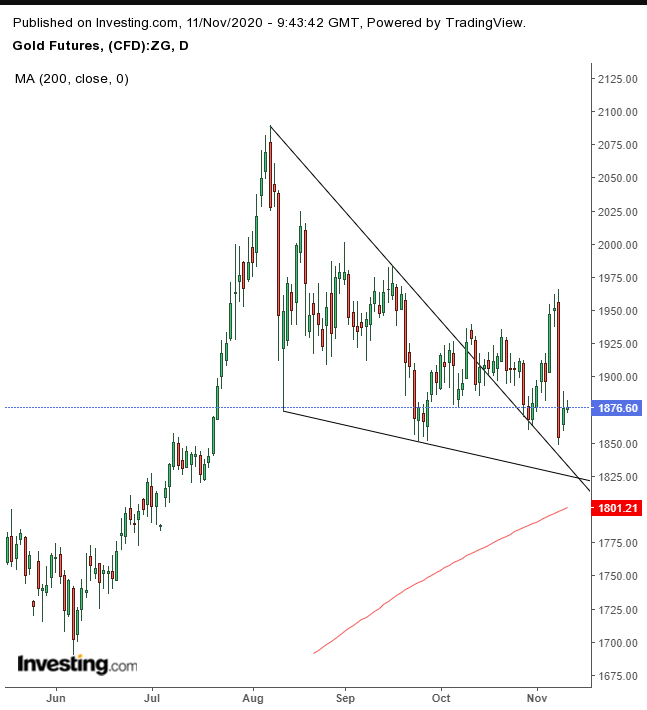 Nevertheless, the falling wedge-maintained integrity, signaling a resumption of the uptrend line prior to the pattern’s pause.

Oil climbed for the third straight day, trading at the very top of the session, under $43, after the American Petroleum Institute revealed a surprising drop of 5.15 million barrels. That unexpected drop fueled the already bullish view in place thanks to the COVID-19 vaccine news. Investors, dreaming of cars back on the road and planes back in the skies, have driven the biggest surge in oil demand in history. 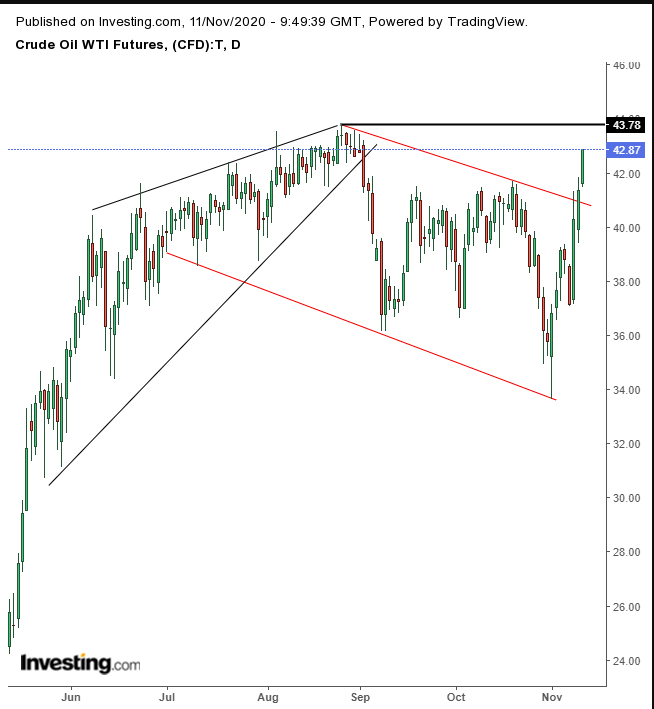 The price of WTI jumped on Tuesday, through the top of a falling channel since the Aug. 26 peak. The upside breakout surprised us, as the bearish channel followed a rising wedge, also bearish after the climactic jump it preceded.

The next serious resistance would be under $44, the Aug. 26 high. If oil can cross that threshold, we’ll be looking at an uptrend. Otherwise, this can still turn into a double top.