US futures on the S&P 500, Dow and NASDAQ 100 rebounded from an early drop on Thursday, after a rally in European shares helped shake off the earlier slump in Asian markets, where equities slipped to lows for the year. Investor focus is increasingly intensifying around a key trade tariff deadline coming up tomorrow, Friday, when US President Donald Trump is set to press ahead with levies on $34 billion worth of Chinese imports.

The pan-European STOXX 600 leaped to their highest level in a week today, during the first half hour of trade, led by gains in auto shares. Reports that EU officials are seeking to broker a deal between the US and EU on car exports boosted the sector.

The UK FTSE was 0.5% higher mid-session, despite the pound showing strength against the dollar. Mining stocks helped lift the London index with shares in BHP Billiton (LON:BLT) up 1.3%; Glencore (LON:GLEN) up 3.2% and Rio Tinto (LON:RIO) up 1.8%. Oil majors BP (LON:BP) and Shell (LON:RDSb) were also higher on the day, up 1.4% and 1.7% respectively.

A rare piece of good news for the UK high street as Superdry (LON:SDRY) released its full year figures showing global brand revenue increased 22.1% to £1.6 billion. Shares were up 7% in the clothing brand as a result of the double digit revenues. 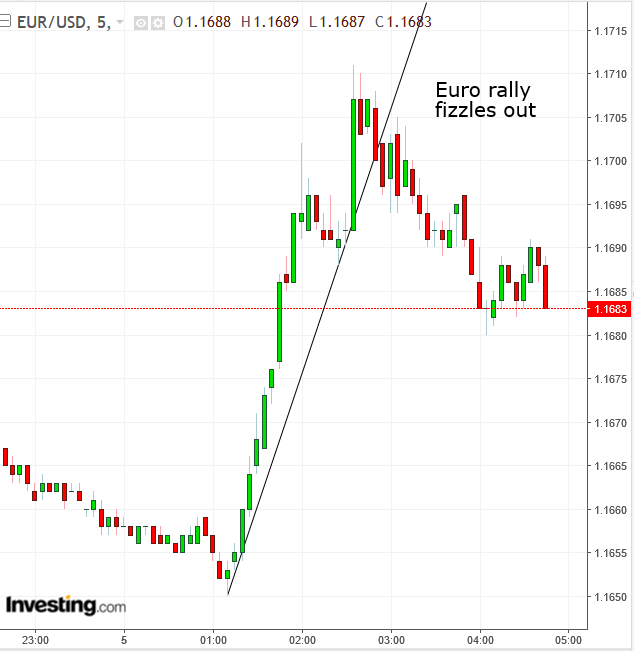 The euro initially jumped alongside European government bond yields, as traders re-priced the likelihood of the ECB tightening sooner than expected. The single currency was also buoyed by upbeat figures from the German Federal Statistics Office, which reported a 2.6 percent jump in industrial orders, obliterating the 1.1 percent forecast. The surprise data beat halted a series of underwhelming economic indicators from Europe's most powerful economy for this year, sending yields on 2-year German sovereign bonds to a two week high.

However, the IMF lowered its forecast for German economic growth in 2018 to 2.2 percent from 2.5 percent, citing the headwinds of a global trade war and Brexit, which both threaten to disrupt market efficiency. Perhaps this less upbeat, bigger picture view stopped the euro rally from gaining traction.

Meanwhile, pound sterling managed to eke out a gain even after UK Prime Minister Theresa May reportedly failed to seal her cabinet's support on a third draft proposal for post-Brexit customs arrangements with the EU—a key stumbling block within Brexit negotiations. The lack of agreement details raises the risk that the UK stands to lose more than the EU member countries if an increasingly likely hard Brexit occurs. The pound weakened against the euro.

Earlier, during the Asian session, shares on all major regional indices except for Australia's S&P/ASX 200 slumped to around their lowest levels in a year. Technical indicators painted a bearish picture.

Japan's TOPIX slid by a full percentage point after the 100 DMA crossed below the 200 DMA late June. Now, the 50 DMA is falling head first toward a collision with the 200 DMA. A Death Cross is set to execute, whose implication is as ominous as it sounds. Should the price fall below the March 26 trough at 1645.16, it will have reversed into a long-term downtrend.

China's Shanghai Composite closed near the bottom of the session, 0.72 percent in the red, for a combined two-day decline of 1.8 percent. The mainland index, which is on track to close lower for the sixth week out of seven, is showing the same moving average interplay as the TOPIX. The price reached its lowest level since February 2016 and is now 3.4 percent away from its January 2016 trough. The next point on the index to watch is a 30 percent drop, to around 1850, which occurred in June 2013.

Hong Kong’s Hang Seng trimmed a 1.6 percent drop down to 0.67 percent, upon reaching 2.5 percent above the uptrend line since February 2016. South Korea’s KOSPI lost 0.4 percent of value, reaching the lowest level since early May 2017 after swinging between 0.4 gains and losses of almost 1 percent.

Australia’s S&P/ASX 200 continued to outperform and to buck the region's downward trend. It climbed over 0.5 percent on Thursday, closing near the high of the session, after dip buyers took advantage of yesterday's selloff in financials shares, sending the sector higher. Technically, the price action on both days traded off the top and bottom of a pennant-shaped consolidation, considered bullish with an upside breakout.

Today's mixed global stock performance follows an equally mixed session on Wednesday, when trading volume was 40 percent lower than the 30 DMA, as the US market was closed in observance of Independence Day.

The previous US session, on Tuesday, ended in the red. Weakness in technology and financial shares weighed on the major benchmark indices and wiped out earlier gains. The performance reversal was a reaction to a Chinese court’s temporary ban on Micron Technology (NASDAQ:MU) chip sales in the country, which exacerbated the already tense market sentiment ahead of this week's looming tariff deadline. 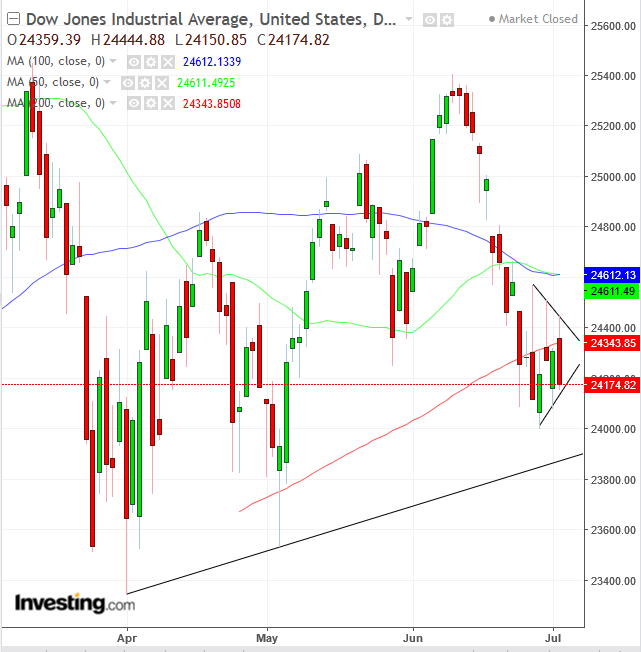 The Dow Jones, whose listed mega caps are the most sensitive to trade war jitters as their growth relies on global markets, is developing a pennant, bearish upon a downside breakout, after sliding lower from the 25,400 level since June 11. Also worrying is the location of the pennant, below the 200 DMA (red). Note that the pennant is situated above the uptrend line since April, revealing the technical significance of this price level. 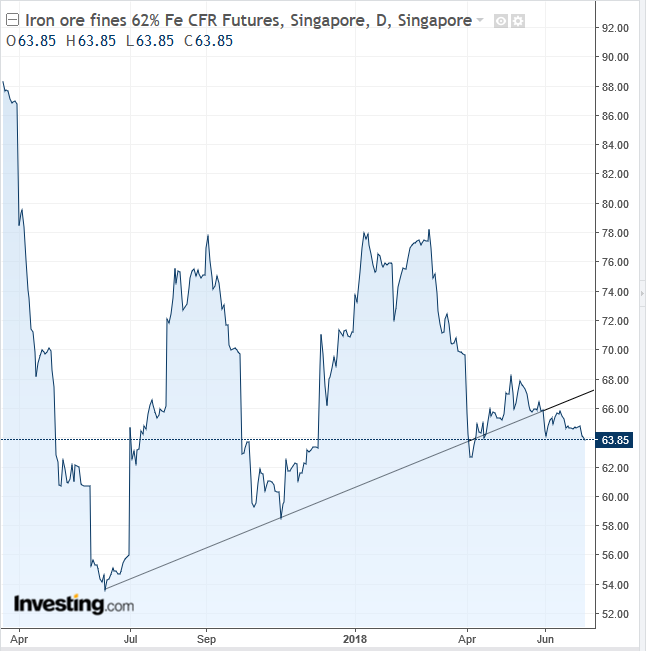 Commodities, also heavily exposed to international trade dynamics, slipped lower: iron ore futures in Singapore slid to their lowest level since April, after crossing below their uptrend line since June 2017.

In other commodity news, West Texas Intermediate crude extended a decline after briefly crossing the key $75 level on Tuesday, as investors weighed the possible implications of tightening US supplies, against a pledge from Saudi Arabia to expand output.

The drop followed Trump's fresh tweets aimed at OPEC oil producers to hike production. With a tough mid-term US election lurking, it's essential for Republicans that the WTI price remains below $75 a barrel. Analysts point out that the ongoing lack of balance between limited supply and growing global demand only indicates that prices will keep climbing.

The American Petroleum Institute (API) reported on Tuesday that US oil stocks dropped by 4.5 million barrels in the week ending June 29—the key driver of WTI's near-3-year spike on that same day. The Energy Information Administration (EIA) is expected to report that US inventories fell by another 5.2 million barrels during the same week, which would officially ratify a seventh straight weekly decline. 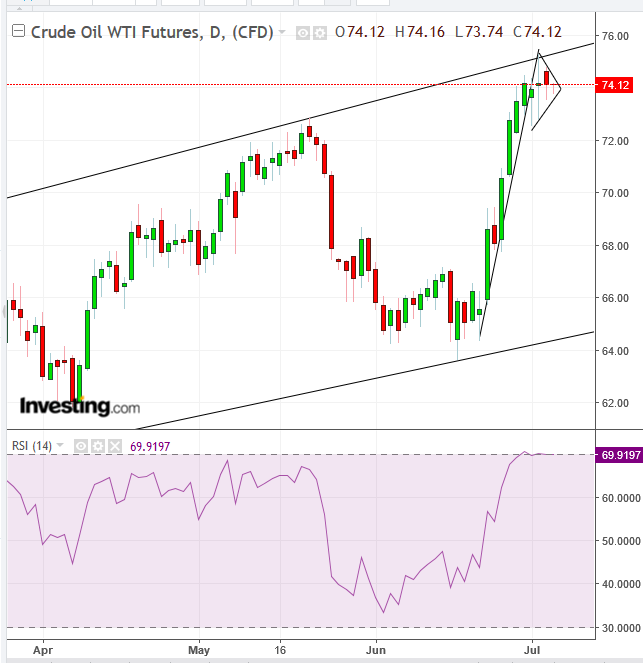 Technically, the price of WTI is trading according to a pennant, a continuation pattern, upon an upside breakout. Note the location of the pennant, at the very top of a rising channel since the beginning of the year, revealing the current dynamic is a potential final battleground between bulls and bears.