US futures on the S&P 500, NASDAQ 100 and Dow seem to be mirroring the downward move seen in Europe this morning, where shares listed on the STOXX 600 slipped lower after opening broadly flat after a two-day rally. European investors appear to lack the conviction of Asian traders, where earlier today, shares across regional indices extended a cautious rebound from a two-week decline that had been spurred by concern over emerging markets weakness when US yields, the dollar, and energy prices were on the rise. 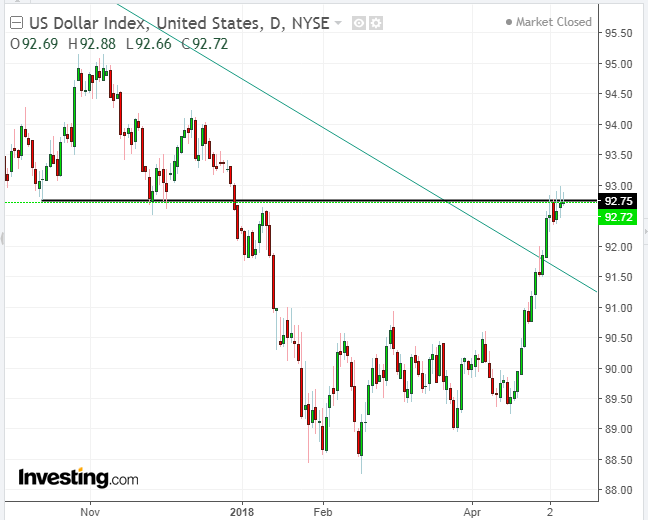 At about 92.88 at the time of writing, the dollar is testing yesterday's session high, after up-and-down movements resulted in a high-wave candle, highlighting a lack of leadership. On the heels of a 4 percent advance since mid-April, the Dollar Index is now pressured by the resistance of the October-December H&S top neckline.

However, since crossing above the downtrend line of late December 2016, traders who follow trend lines may increase bets that the resistance under 93.00 will be broken, paving the way for the 94.00 shoulders levels, before the 95.00 head levels.

The pound dropped to its lowest level in almost four months following worse than expected house price data ahead of the Bank of England rate meeting on Thursday. UK house prices cooled unexpectedly in April according to mortgage lender Halifax. House prices increased by 2.2% in April from the same period one year ago, down from 2.7% in March, and lower than an expected increase of 3.3%. Rate hike expectations are now below 10%, compared with over 90% one month ago. 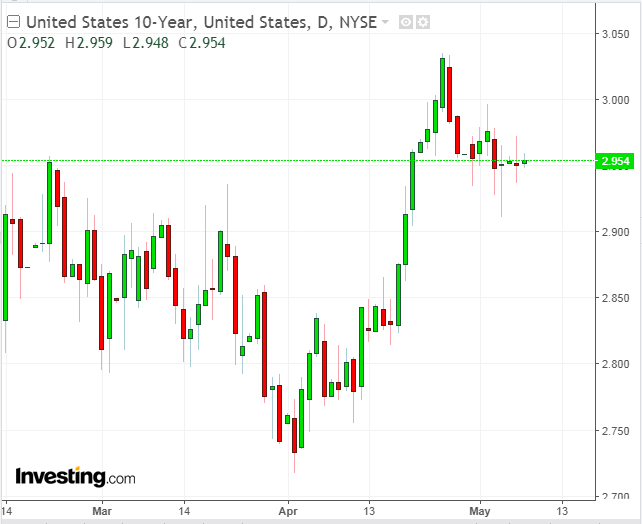 The US 10-year Treasury yield—the cause of much consternation and heartburn for traders after its first double-digit correction in two years this past in January—is flat for the fourth day on a closing basis. It has been fluctuating intraday, both last Thursday and yesterday, and now hovers around 2.95 percent, still comfortably below the 3 percent psychological level.

Technically, the yield is congesting within a bullish falling flag. An upside breakout would suggest an increase of 20 basis points, with a minimum target of 3.14 percent.

Although so far yields remain below the key 3 percent mark, the 7 percent flag pole (the sharp, 7-day straight advance before the flag's profit-taking congestion) seems to have already wrought havoc on some developing markets. The Indonesian rupiah dropped to 14,274 against the dollar yesterday, hitting its weakest level since October 2015, in the wake of a disastrous air crash at that time.

Today, however, the IDR is paring a decline that retracted most of yesterday's gains. As well, the country's sovereign bonds were sold off and the Jakarta Composite Index suffered the worst drop among regional peers; it closed 1.88 percent lower. The Indonesian benchmark is sliding for a third straight week, after crossing below the uptrend line since 2015 and completing a descending peak-trough series, which officially placed it in a downtrend.

In additional emerging markets news, Turkey's lira and equities retreated yesterday, while the Argentina's peso seemed to stabilize following a tumultuous week of unscheduled interest rate increases by the Central Bank of Argentina. 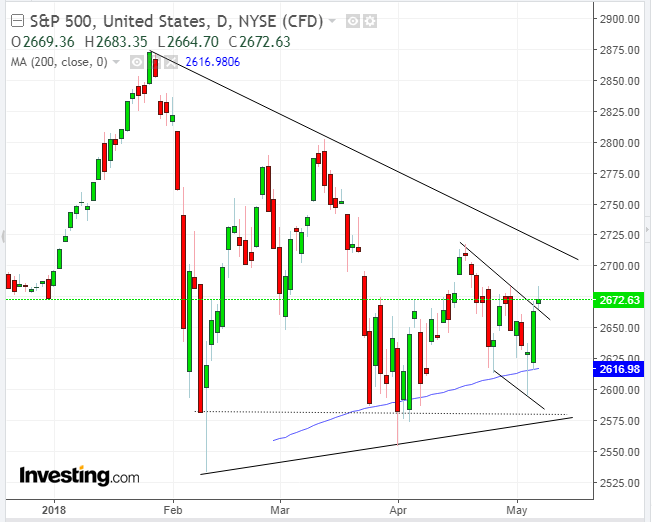 US stocks advanced at a measured pace during yesterday's session, albeit steadily enough for the S&P 500 to cross above its congestion highs since mid-April. The test for the US benchmark index would be the 2,700 trend line connecting the highs of a much larger and much more meaningful consolidation since the January record.

Gains were fueled by Technology firms which outperformed (+0.7 percent), followed closely by Financials (+0.66 percent) and Real Estate (+0.66 percent). Despite the heightened focus on oil, energy shares climbed only 0.14 percent, after oil gave back most of its gains.

Virgin Money (LON:VM) shares jumped more than 10% on Tuesday following news of a takeover bid by Clydesdale owner CYBG (LON:CYBGC) to the tune of £1.6bn.

SKY (LON:SKYB) shares were down 1.3% on Tuesday after the European Commission reported that antitrust regulators will rule on U.S. cable company Comcast’s £22bn bid for Sky by 15 June. Comcast’s (NASDAQ:CMCSA) offer for the UK TV company is greater than Twenty First Century Fox’s bid, made back in 2016 yet beset by UK government hurdles wary of giving Rupert Murdoch too great a share in the UK press. 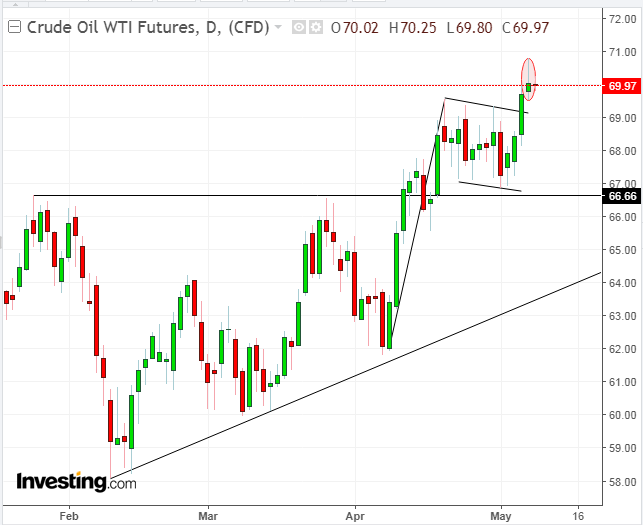 Crude is holding steady at yesterday's closing price, after it retreated from above $70 a barrel—its highest level since 2014—whose fluctuation and a candlestick formation similar to the one seen for the dollar suggests oil prices tracked the greenback rather than noise around the oil market itself.

Still, crude is likely to experience ongoing fluctuations as we approach US President Donald Trump's deadline for deciding whether to continue or halt the current Iran nuclear deal. The president is expected to announce his decision later today. Key deal allies, including Germany, France and the the UK, are opposing a withdrawal.

Geopolitical activity notwithstanding, the oil market's new dynamic will likely be a key reason for the commodity's price movements going forward. Sector beneficiaries are also in flux.