European shares and futures on the S&P 500, Dow and NASDAQ 100 staged a rebound from an early slide this morning, as an historic breakthrough on Brexit eclipsed trade caution as well as some additional red flags on the economic data front.

The STOXX 600 opened lower with mining shares, while the pound threatened to end its rally as Northern Irish Party DUP spurned the latest Brexit proposal by British Prime Minister Boris Johnson. However, the tide turned in the late European morning as Johnson and the European Commission's President Jean-Claude Junker confirmed a deal had been sealed in Brussels—ending three years of thorny negotiations between the two blocs and internal political twists in the U.K., including a tormented change of leadership in the ruling Conservative party.

The pan-European benchmark, cable and the euro all rallied on the news—though, technically, the Brexit agreement still has to pass a vote in the U.K. House of Commons on Saturday.

Earnings season remains in the spotlight on the other side of the Atlantic too, as companies including Coca-Cola, AMD and oil services provider Schlumberger (NYSE:SLB) prepare to report their corporate results in a climate of ongoing skepticism over U.S.-China trade accords. Investors are growing doubtful about a lasting trade truce between the two economic powers after last week’s round of talks failed to yield an official agreement. Further clouding the macro background are the dismal September retail sales figures and the “slight modest pace” of economic growth flagged by the Fed Beige Book. 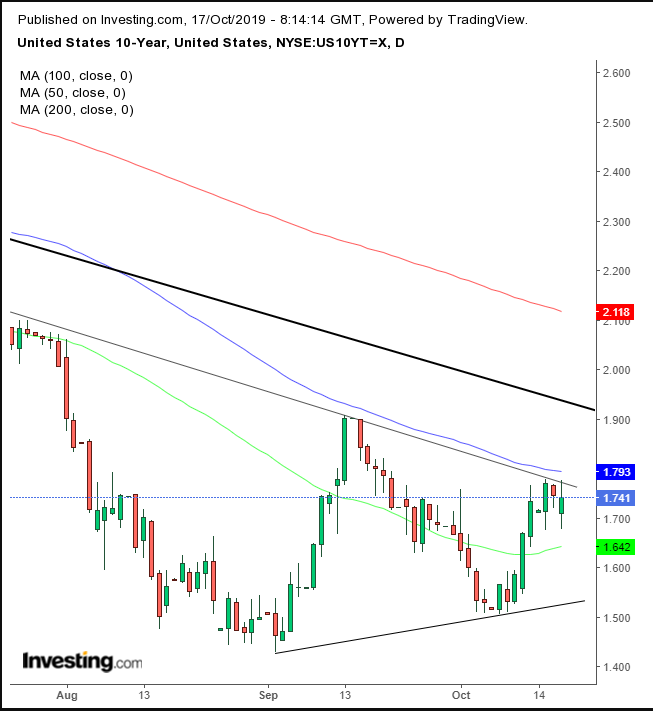 Yields on 10-year Treasurys rebounded from a second day slide despite the surprise decline in retail sales yesterday, which boosted bets for an October rate cut. Technically, yields fluctuate at the top of a crucial symmetrical triangle, below the 100 DMA and the long-term downtrend line since November 2018. 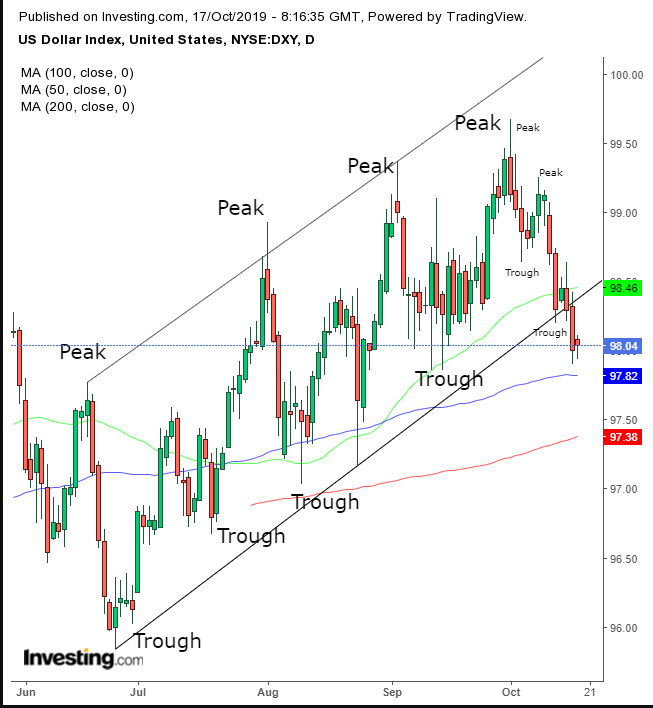 The dollar pared some of yesterday’s losses but remained in negative territory, as the index fell below a rising channel since late June for the first time. 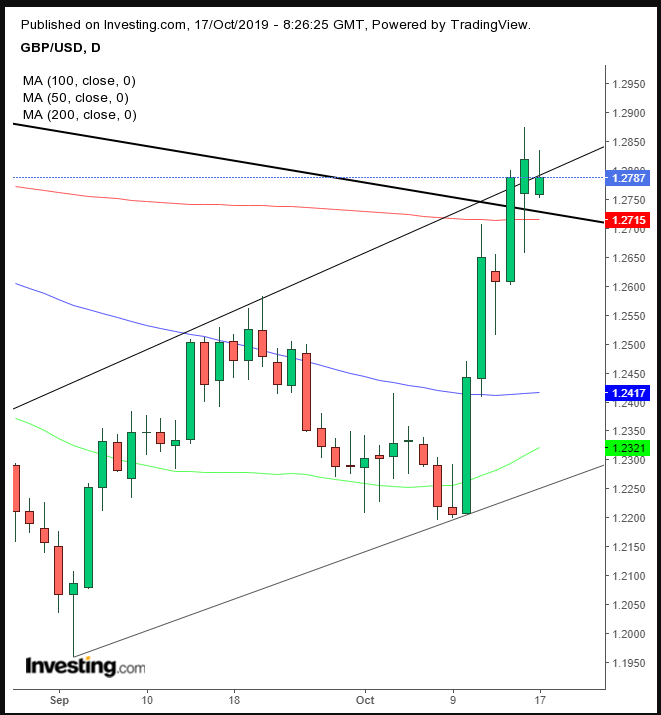 Sterling spiked on news of a long-awaited Brexit deal, bouncing from the drop that had been sparked by Prime Minister Boris Johnson’s political allies in Northern Ireland, who said they couldn’t support the proposed framework for an agreement. Even then, technicals had kept the pound from losing too much ground after scaling above the downtrend line since April 2018 and the 200 DMA—while the currency remained below the top of a rising channel, providing resistance. 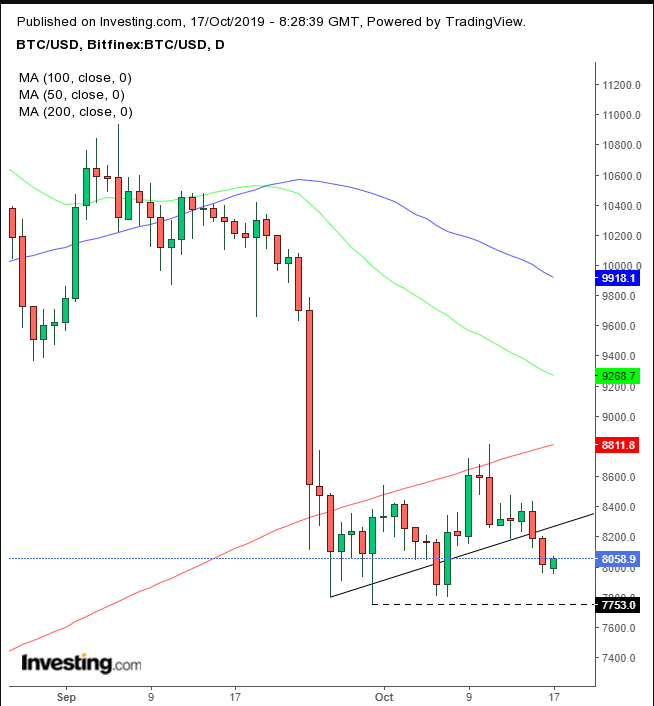 Bitcoin hoovered in the red after trading below a rising flag all session on Wednesday—bearish after the near-25% drop last month. However, we’d feel more comfortable to call it after it closes below the lowest price traded on an intraday basis while developing the pattern. 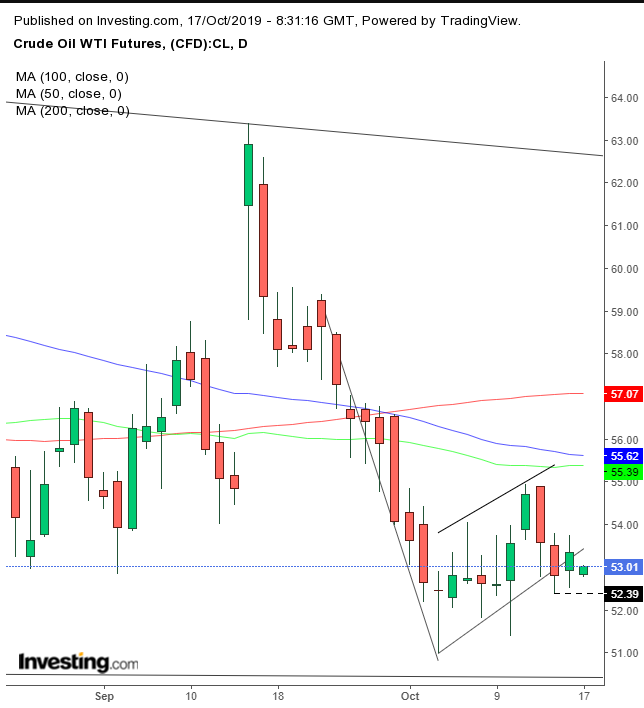 Crude oil dropped after an industry report showed a sharp jump in U.S. inventories. Technically, the price may have been completing a rising flag, bearish after the 14% fall from September to early this month—though the price has been moving sideways for the past three days, and we’d wait for a close below $52 before turning bearish.